Today, February 29th, is the feast day of St Oswald of Worcester - it must be a bit disappointing to be a saint and then find you only get observed on your proper day every four days - but I assume, indeed believe, that Saints are above such human foibles.

John Dillon has posted a piece about him on the Medieval Religion discussion group [slightly adapted] :

A leading figure of the tenth-century Benedictine reform in England, Oswald of Worcester (d. 992) was a nephew of St. Oda the Severe, Archbishop of Canterbury, from whom he received some of his early training, and a more distant relative of Oscytel, archbishop of York, who became his patron after Oda's death.  Oswald made his monastic profession at Fleury-sur-Loire and was a monk there until the very early 960s when he was named bishop of Worcester.At Worcester, though Oswald founded a monastery next to the cathedral he seems not to have converted his chapter into a monastic one (as was alleged in the twelfth century).  He also founded Ramsey Abbey on an island in the fens in Huntingdonshire and re-founded Winchcombe Abbey in his own diocese.  In late 971 or in the first half of 972 Oswald was elevated to the archbishopric of York but kept the much wealthier see of Worcester in plurality, which is where he died.  A cult sprang up almost immediately; its centres were at Worcester and at Ramsey.  Oswald has an early Vita ascribed to Byrhtferth of Ramsey (BHL 6374; between 997 and 1002) and a fuller Vita et Miracula by Eadmer (BHL 6375-76; ca. 1115), who was asked to write it by the monks of Worcester.  His _dies natalis_ is 29. February, as is also his day of commemoration in the Roman Martyrology.The fifth item here is an expandable view of a page in the later tenth-century so-called Ramsey Psalter (London, BL, Harley MS 2904), said by Nicholas Brooks in his Oxford DNB entry on Oswald (v. 42, pp. 79-84) "likely to have been made for Oswald's own use at York or Worcester": 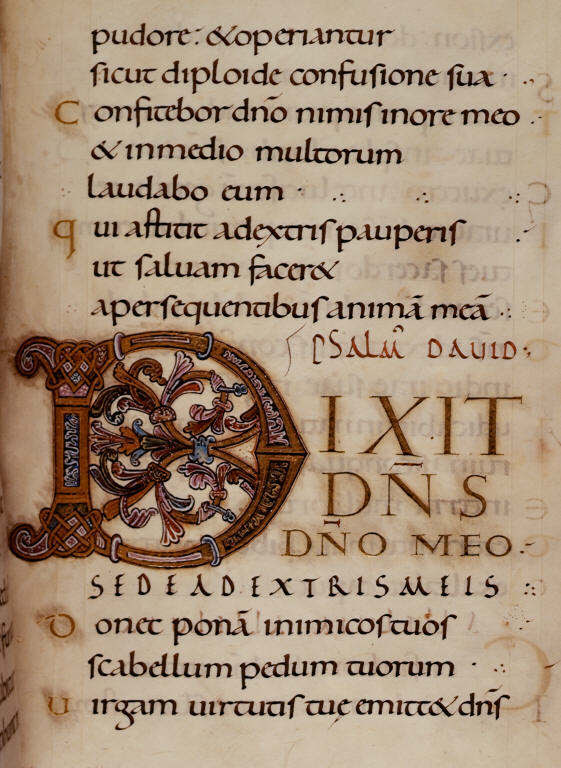 This imposing copy of the Psalms in Jerome’s Gallican version may have been intended for the personal use of Oswald (d. 992), bishop of Worcester and archbishop of York, who profoundly influenced the development of the English church during the second half of the tenth century. It certainly contains liturgical evidence linking it with one of Oswald’s foundations, the Benedictine monastery of Ramsey in Huntingdonshire. The beginning of Psalm 110 (109 in the Vulgate’s numbering) is illustrated with a gold letter D(ixit) (He said) with acanthus plant ornamentation. The decoration of the initial of the first words of certain Psalms became standard in English Psalters, and here is a fine example of the ‘Winchester School’ style of illumination.
http://tinyurl.com/29txs4

The manuscript in full:http://www.bl.uk/manuscripts/FullDisplay.aspx?ref=Harley_MS_2904A page of views of the present Worcester Cathedral, which has a Norman crypt and is very largely a twelfth- and thirteenth-century building, restored in the nineteenth century :
http://tinyurl.com/2m2nbcA view of the remains of Ramsey Abbey's fifteenth-century gatehouse - one of the few fragments surviving of this once famous abbey:


Subsequently Gordon Plumb added a picture on the site of a 15th century glass panel at Great Malvern Priory, NIII, with St Oswald shown as Bishop of Worcester:
https://www.flickr.com/photos/22274117@N08/15153918430