Were today not a Sunday it would be the feast day of St Henry, the Holy Roman Emperor Henry II, who died in 1024. This then is the 990th anniversary of the death of the last Ottonian Emperor, who was canonised in 1146.

There is an online account of his life and reign, including his camapignes in Italy and Poland as well as his extensive patromage of the Church at Henry II, Holy Roman Emperor.

The see of Bamberg, which he founded and in whose cathedral he is buried and a city with which he is always associated through that fact and the survival of relics of him there is also covered here.


The artistic survivals from his reign are an indicator of the lavish, cultivated and beautiful Imperial and ecclesiastical court culture of the age. 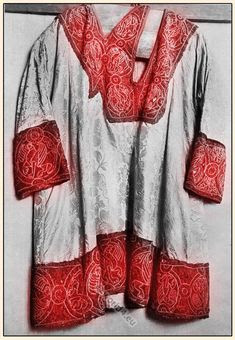 Image:pinterest.com
From the website Historical Needlework Resources there is something about another surviving textile from the Emperor's ceremonial wardrobe:

The Sternenmantel of Emperor Henry II

It was created using the stitches and techniques of surface couching, applied pearls and applique

The mantle is approx. 3m wide and 1.5m high. The embroidery depicts scenes from the Life of Christ as well as celestial bodies. There are fourteen medallions containing figures. The design elements are worked in fine couched gold thread on violet silk twill. There is some coloured silk work (white, red, blue and green). Some of the figures have elements worked in stem stitch. The mantle is believed to be of Southern German manufacture.[I am not sure how that coheres with assertion that it was the gift of the Duke of Bari - JRPW]

In 1503 the embroidered elements were cut away and remounted on the current Italian silk damask. Therefore, the original placement of the motifs on the mantle is unknown. There are futher links at Detail of applique motif from the Sternenmantel of Emperor Henry II

Later in date, but linked to the canonised Emperor, is the later medieval so-called Crown of St Henry II. This is a reliquary crown, which belonged to the reliquary of the Emperor in Bamberg cathedral. This was presumably like that of Charlemagne at Aarchen or the one in Prague of St Weneslas  which was topped off with the surviving Crown of St Wenceslas. After the process of German Mediatisation  Bamberg passed into the Kingdom of Bavaria and  the new ru[ers took the crown to the treasury of the Munich Residenz, where it still can be seen.

This lily crown consists of six plates which are joined together by hinges fixed with pins. Each of the plates carries a large fleur-de-lis. The pins are surmounted by praying angels standing on acanthus leaves. Four of the segments and all of the fleur-de-lis are adorned with precious stones while two carry antique cameos. The decoration of the frame with foliage work seems to be of later date than the frame itself. Due to fitting slots on the front and back segments it is possible to add an imperial arch and cross to the frame. One theory is that the crown was made for the reliquary in the fourteenth century but it may also be a crown of the Emperor Frederick II (d.1250) which came into the possession of Bamberg cathedral through the Emperors Henry VII and Louis IV the Bavarian. 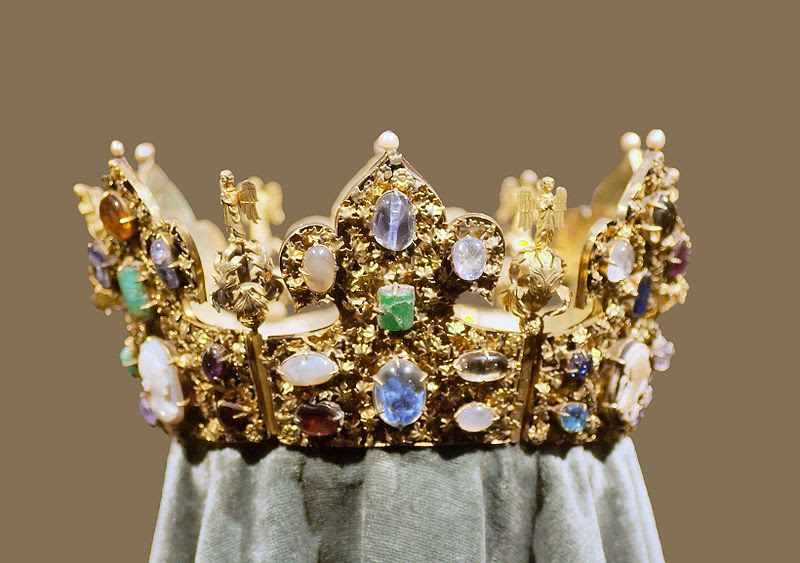 The Crown of St Henry