Baroque Music at the Oxford Oratory

Earlier this evening I attended a splendid concert of Baroque music at the Oxford Oratory in aid of their Appeal. The concert was given by the Camerata of Curiosities: 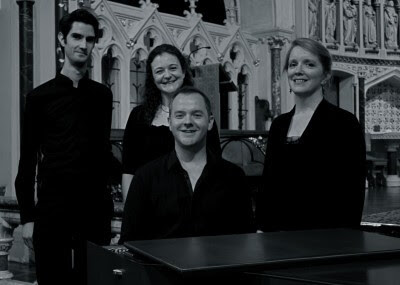 They are Jennifer Attia ~ Mezzo Soprano, Stephen Sweet ~ Violoncello and Andrew Knowles ~ Harpsichord, together with, for this occasion, the renowned soprano Emily Van Evera as a guest.

Andrew Knowles is Organist at the Oratory and the founder of the Camerata.

All the pieces were essentially from the time of the beginnings of the Oratory, and included music by John Blow, Domenico Scarlatti, Claudio Monteverdi, J S Bach, Alessandro Grandi, Isaac Posch and George Frederic Handel.

A remarkable piece for the birth of Our Lady by Barbara Strozzi was movingly sung by Emily Van Evera, and the evening finished with the Office Hymn for St Philip "Pangamus Nerio", reconstructed from a manuscript from Santa Maria della Fava in Venice.

This was a most enjoyable evening, and one which aided the Oratory Campaign. This is the second such concert given by the Camerata, and I hope to advertise any future ones - they have a beautifully crisp style of performance and their performances a delight for anyone interested in music of the era.