Today is the 430th anniversary of the assassination of William the Silent, Prince of Orange in 1584 at Delft - incidentally the first head of state to die as a result of a pistol shot. There is an online life of the Prince at William the Silent 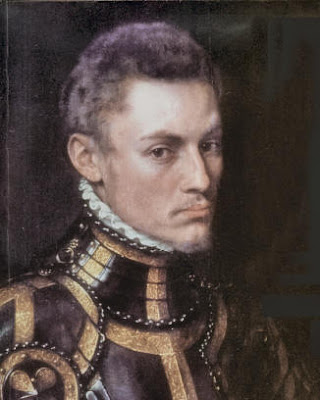 William, Prince of Orange at the age of 22

The Prince, whose epiphet should better be rendered as the Taciturn became the leader of the revolt of the Netherlands against the rule of King Philip II, and he thereby established the House of Orange Nassau as Stadtholders and then monarchs of what now comprises the Kingdom of the Netherlands.

One of the books I am currently reading is C.V.Wedgwood's biography of him, William the Silent, which was published in 1944. This was a copy weeded out from the Oxford Union Library which I bought. As a biography it does not appear to have been replaced in English, and this very readable book, an award winner in its time, has all the elegant and scholarly features one associates with the work of its author Dame Veronica Wedgwood, most famously her books on the English Civil War.

That said I do rather feel as I read the book that it may in part be influenced by the time in which it was written - the Netherlands under German occupation an dthe Hous eof Orange exiles in Britain or Canada. Further it has something of the quality of Robert Bolt's depiction of St/Sir Thomas More in A Man For All Seasons - the hero appeals to the twentieth century reader or viewer as one of us, surrounded by the limited blinkered people of the sixteenth century...

I am a little surprised that there has been no new interpretation which presents the Prince of Orange as an ambitious politique, or as a man increasingly radicalised by his move from his original Lutheranism and accomodating Catholicism to Calvinism, or indeed as a man often out of his depth trying to preserve an older Burgundian model of governance when the world he had known under the Emperor Charles V had passed away. In that sense he was caught between the world of Trent and of Calvinism, when stronger views prevailed on most sides, and fanaticism came to the fore. Thus as a politician and ;ater as a commander he could not prevent Protestant attacks on churches or crimes such as the
killing of the Martyrs of Gorkum, whose feast day was yesterday, in 1572. Similarly his own murder was the work of a fanatical CatholicBalthasar Gérard and the fate meted out that assassin is arguable the most extreme and sadistic execution in European history.


Given his skill at not revealing his thoughts - his famous taciturnity - one can perhaps see why he was not popular with Spanish King and his agents in seeking to rule teh Burgundian inheritance.

William the Silent at the age of 48

As Father of the Fatherland, entombed - indeed almost enshrined - in his great seventeenth century monument in Delft, and surronded by the remains of the successive generations of the House of Orange-Nassau William the Silent has an assured place in the history of the country he made his own. Whether we have a definitive view of him is perhaps less certain.

Prince William must have been an exceptional man. Thank you for drawing my attention to him. In comparison to what befell his killer, William may be considered the lucky one...

I would like to see the sculpture of the dog, a Kookerhondjke, we had one who was in a shootout, 2 men killed, the current dog's human survived.