The wedding of King Philip and Queen Mary


460 years ago, on St James' day 1554 Queen Mary I married King Philip of Naples, who from 1556 was King Philip II of Spain*, in Winchester cathedral. The choice of the feast day of the patron saint of Spain was doubtless seen as auspicious.

For the Queen this must have been a day of triumph. Just over a year earlier from her position as a spinster elder half sister of the deceased King Edward VI, marginalised as a Catholic and with the practise of her faith under threat, and then excluded from the succession altogether,  she staged the only successful uprising in Tudor England against the central government, saw off her opponents, set in motion the restoration of Catholicism and now married the most eligible young man in Europe. Not bad going. 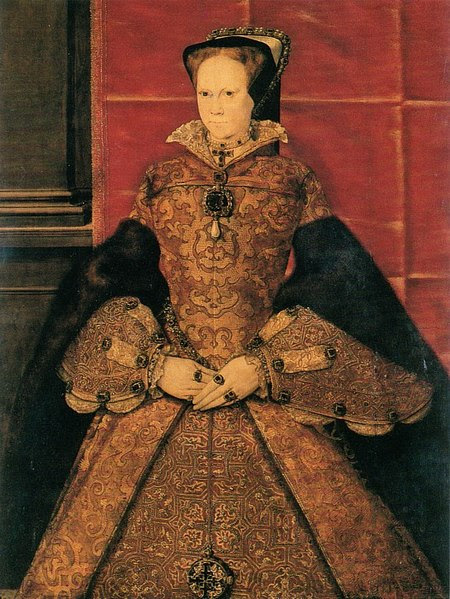 The basis for the wedding was the treaty negotiated earlier on in the year and made into English law by an  Act of Parliament, about which there is an article here. The background can be read in the illustrated online life of the Queen here.

The wedding ceremony itself is worthy of note in that apart from her mother's lavish wedding to Prince Arthur in St Paul's in 1501 Tudor royal weddings were not great public events, and indeed the great public royal wedding we expect today is something from the twentieth century. From 1554 until the 1920s England saw nothing comparable.

There is a detailed account of the wedding in my friend John Edward's recent biography of the Queen, published by Yale UP in their English Monarchs series.

One of the sources for our knowledge of the day is the official Herald's account, transcribed and published in the eighteenth century, and which can be read at The Marriage of Queen Mary and King Philip 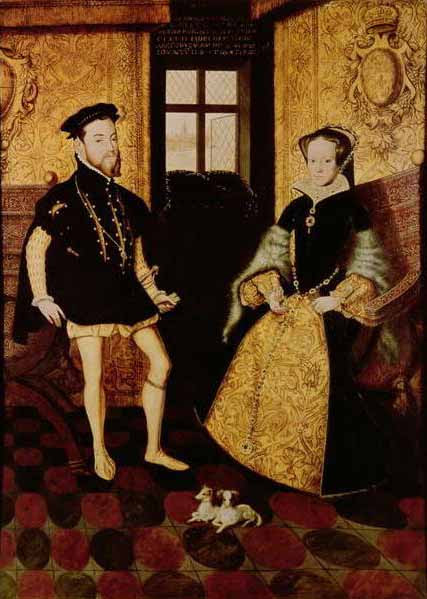 
The blog Mary Tudor - Renaissance Queen has an account of the events of the day and of surviving buildings and other remains today here and from another blog there is also an account of the wedding which can be seen here.

A reconstruction of Queen Mary's wedding dress, created by Tanya Elliott, which was displayed at the Exhibition The Marriage of England and Spain - the 450th Anniversary of the Marriage of Philip and Mary  held from June 20-September 30, 2004 at Winchester Cathedral

Queen Mary's dress was described as consisting of a mantle of brocaded cloth of gold, bordered with pearls and diamonds of great size, and lined with ermine. The dress was also gold smothered with the same precious stones, and the underskirt of white satin embroidered of silver. The French hood  - that is a headress of rounded shape is worn over a coif, and with a black veil attached to the back, that is very like a modern tiara in shape - in black velvet was surmounted by a double row of large diamonds.

The Queen had a noted fondness for jewellery, and one of the King'swedding gifts to her was the pearl La Peregrina, of which there is a history here. In most of her portraits the Queen is depicted wearing it.
On her death it was returned to the King. 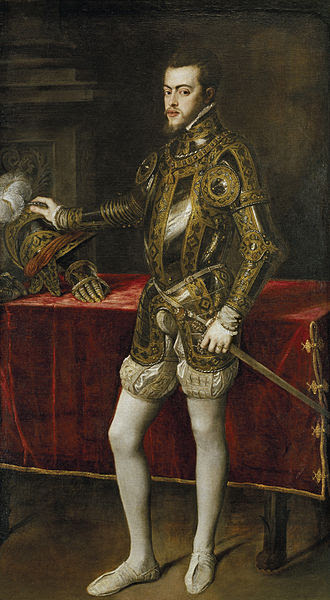 King Philip
A potrait by Iitian of 1551, now in the Prado

King Philip, eleven years younger than his wife, may indeed have married her out of Habsburg familial duty to his father, and have been irke dby the restrictions the marriage treaty placed upon his exercise of power, but in both public and private he appears to have been attentive to the Queen who became fdeeply enamoured of him. Contemporaries quoted in Henry Kamen's excellent biography King Philip considerd that if the English populace hasd more access to him he would have won their regard as well. A reserved man, who appears to have disliked much of the outward display called upon for European monarchs at the time, he does not appear to have been a natural linguist and spoke little English, nor, and this was to be a problem for him later in ruling the Netherlands, Flemish or Dutch. He nad his wife communicated in Spanish, French and Latin. His youthful high spirits, clerly described by Kamen were kept under control, and the punctuillious, reserved monarch of the future was being formed.

One formal consequence of the wedding was a change in the Royal Arms. Few instances of these now survive. One can be seen in Trinity College here in Oxford. This was founded in 1554 and teha rms are painted over the fireplac ein the hall, but in their present form appear to be entirely nineteenth century. At Windsor Castle on the outside of the lodgings of the Military Knights of Windsor there is a restored version of the arms carved in stone, as can be seen in the article College of St George - Windsor Castle - Royal Arms of Philip and Mary 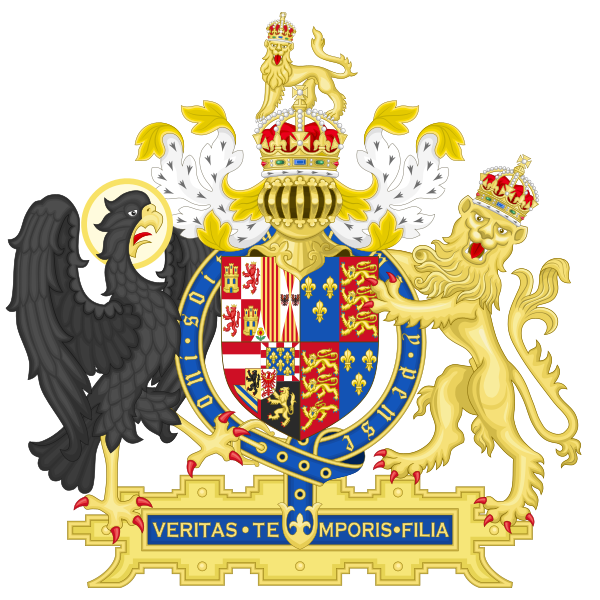 
* Strictly speaking the King's titles were more complex than that simple description. The modern form King of Spain was not used before the 1870s. King Philip would have been styled variously King of Spains and the Indies or King of Castile, Leon, Aragon, Navarre, and all the other subsidiary titles of the Spanish crown. On this see List of titles and honours of the Spanish Crown and  Many titles of King Philip II of Spain