There can be little doubt as to the importance of King Henry II to the history of England, of the British isles and to France, or of his continuing legacy. There is an online illustrated account of him here, which reflects the historiographical issues his reign poses.

Thomas K. Keefe's academic account of him from the Oxford Dictionary of National Biography can be read here.

Of the various full-length biographies clearly the standard one is W.L.Warren's massive and magisterial biography in the Yale series on English Monarchs. It is a while since I ploughed my way through that, but it is a work full of detail and insights into the practice of medieval kingship. 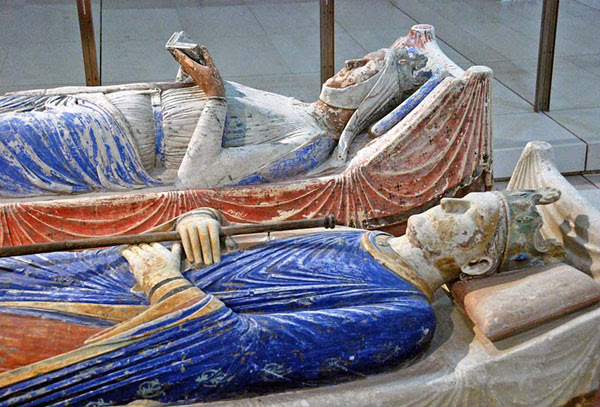 
I have written beforehand of how moving it was for me in 1993 to actually stand and look at those so well-known effigies of the King and Queen, and of King Richard I and Queen Isabella, wife of King John, in the wondrous church at Fontevrault. An experience I will never forget. Here was the heartland of the Angevin empire - if indeed it was such a thing - strectching in the twelfth century south to the Pyrennes and far to the north to the overlordship of Scotland and the newly acquired Lordship of Ireland... 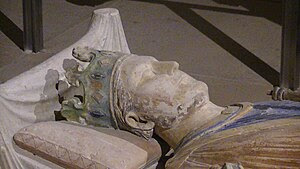 The head of the effigy of King Henry II

As a man and as a ruler the King was far more complex and subtle I think than the popular image of him, whether derived from chroniclers at the time or modern playwrights and actors - the King is a gift to all of them. That is why Warren's book, and the work of other academic historians on Henry FitzEmpress should be read.

Fitting tribute to one of the greatest medieval rulers.

The recent research revealed that all the figures in the Radegonde mural are males (judging from their cloak clasps). The crowned figure which we thought represented Eleanor with all probability represents Henry the Young King.

You are most welcome- I too found it most fascinating. There is still so much to discover. Recently, for instance, I have come across the image of the Young King I didn't know about. I cannot express how happy I was... like a child receiving a much-awaited Christmas present.

I will post further about this in a few days - when I can find the time!