When I wrote my recent post King Henry II I added to it, almost as an afterthought, an image of the painting of the King and his family in the chapel of St Radegonde in Chinon, slightly adapting the accompanying text. I reflected as I did so that the suggestion that it has something to do with Queen Eleanor's captivity after 1173 struck me as something of a non sequitor. A comment by reader suggested that the latest thought is taht the painting depicts not Queen Eleanor but Henry the Young King and his brothers riding after their father. The key point was the position of the clasp of the cloak. As a result I thought I would look into more about the painting. 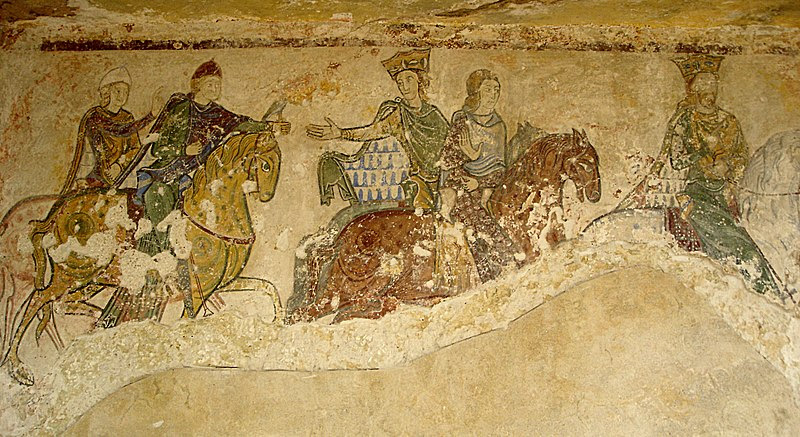 
The painting is in Sainte-Radegonde, a chapel half built into the rock-face and about twenty minutes walk outside the town. There are pictures of the chapel and an account in a blog here which I have used and edited in writing this post . An underground natural spring at the back of the current chapel was a in pre-Christain times the site of pagan worship. The site was Christianized in the sixth century when St Radegonde came to visit a hermit called John ( Jean Le Reclus, or St John of Chinon) who lived and was buried there,  and hence, ultimately, the dedication of the chapel.

St Radegonde herself was born circa 520 in the kingdom of Thuringia, in  central Germany. She and a brother were taken hostage by their uncle, who had killed their father to claim the crown of the kingdom. When this uncle refused to honor a treaty with the Merovingians he lost his kingdom and his life when the Franks invaded Thuringia.  Radegonde and her brother were again captured and she was forced to marry Clothaire, a son of Clovis, the first King of the Franks. Marriage did not suit Radegonde but piety did, and she soon assumed the life of an ascetic. Radegonde eventually learned that her brother had led a revolt against her husband's rule of their native lands and had been assassinated by order of Clothaire. She repudiated her husband, took sanctuary, and eventually became a nun. Clothaire did not take kindly to his wife's abandonment and Radegonde sought spiritual direction from Jean Le Reclus in the face of obstacles Clothaire placed in her way. She founded L'Abbaye de Saint-Croix at Poitiers and was revered by the women who joined her there. The convent declined following her death in 587 but Radegonde's personal legend strengthened;part of her legend credits her with single-handedly killing a marauding, nun-killing dragon. She was canonised in the ninth century and a number of towns, churches and chapels in both France and England were dedicated to her, and an abbey founded in Dover in her honour in 1191. 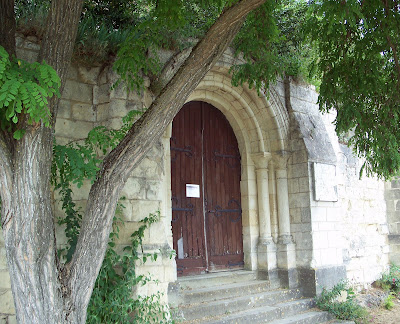 The entrance to the chapel

At Chinon itself the two naves of the chapel were created in the twelfth century, one carved directly out of the rock, and the other one built.
Queen Eleanor would have been familiar with Radegonde given their shared city of Poitiers, and could well have identified with a Queen consort with familial troubles.
Jean of Chinon was supposedly a refugee from the Saxon raids on Britain, Radegonde revered him for his wisdom and spiritual direction, so much so that legend has it that upon his death Radegonde had a chapel built here to house his remains.
If Queen Eleanor of Aquitaine considered St Radegonde to be a saint of particular personal devotion, then it is not unreasonable that she  may have endowed this chapel, or visited it when in Chinon, and that her personal interest was indicated by the wall painting of her family. That is assuming that this is not just a scene from the life of St Radegonde. Identifying the Planatgenets with figures from the life of a saint would not be unusual, but the likelihood does appear to be that this does depict King Henry II and his family, whether as themselves or as representitives of figures in the life of the chapel's patroness.


In addition to its subject matter, this painting is of outstanding quality in its execution, its vivacity and the variety of colours.


As to the precise subject matter there have been many theories. One is taht it depivcts King John's marraige in 1200 to Queen Isabella, but that does not seem to fit with the other figures.

The oft repeated suggestion that it depicts Quuen Eleanor's detention after 1173 or her release seems unsclear, and also not something to be depicted - the Angevins doubtless had some regard for presenting an ouwardly serene impression of dynastic unity for as long as possible. 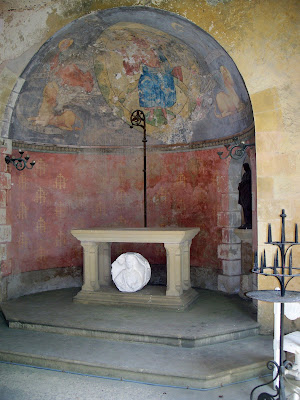 A general view of the chapel apse. The figure of Christ in Majesty suggests Cluniac influence. 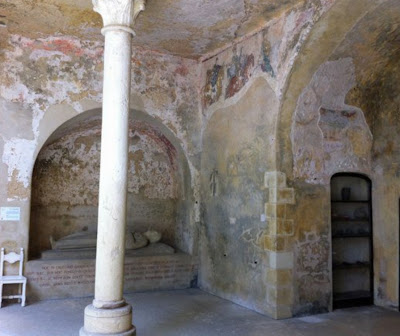 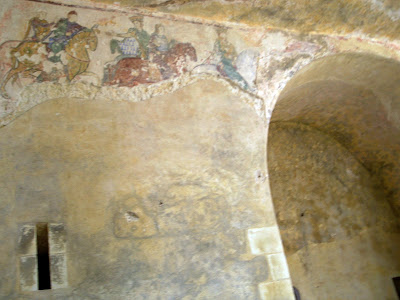 The painting from below 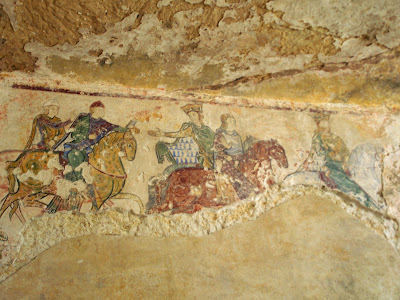 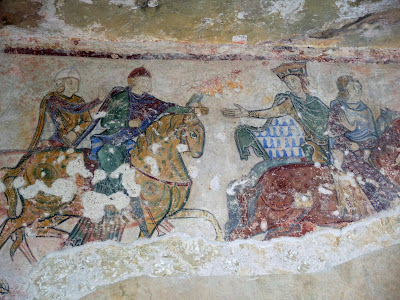 Given the indications of a family group, then surely it is King Henry II in the lead. The presumption has been that it is Queen Eleanor is in the centre, and probably her daughter Joanna, later Queen of Sicily beside her - the other daughters Matilda Duchess of Saxony and Leanora Queen of Castile were married and absent, so this may be meant to be the family who might be at court.

Then which sons are in the rear? The future Kings Richard and John does not fit with the dynastic dynamics. Is it the Young King and Richard, but that excludes the younger sons Geoffrey and John.

if the painting is after 1183 or 1186 then the two decesed sons can be excluded, but that raises all kinds of additional problems.The idea that it is a servant beside Eleanor seeems unlikely - this is a depition of ahierarchical family, not asnapshot of how peopel might actually have travelled.  If it is after 1189 and it is King Richard I leading then it is suggested Queen Eleanor could be riding with his Queen Berengaria but that seems unlikely given not only her lack of a crown,but her posture is wrong for awoman of her station. 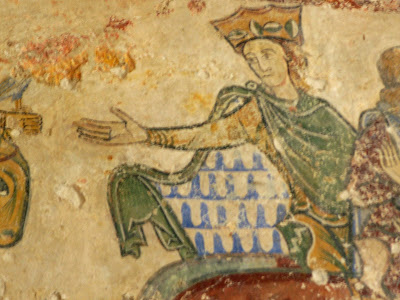 
The blog author is convinced the regal figure is Queen Eleanor. Personally I am inclined to the solution that it is King Henry and his four sons after 1170. The Young King, fifteen when he was crowned, is shown beardless and with the longish hair of a youth, as are the other three figures. If it is agroup image of the Angevins it is, of course, both stylised and contrived - medieval Kings did not go hunting in their state robes anymore than their successors did or do. The painting suggests a united family of father an dfour sons out enjoying themselves. The reality may have been different, but this was the impresson aimed for by the artist and whoever commissioned him. maybe it was Queen Eleanor and maybe it was her fervent prayer to St Radegonde that it might be so.

Other paintings, depicting the story of Sainte Radegonde and Saint John, were made during the 17th century. The chapel was deconsecrated following the French Revolution and used as dwelling places. In 1878, it was bought and restored as a sanctuary by a benefactress of Chinon, Madame Charre. It is doubtless to her that we should give gratitude for preserving this remarkable painting.

The inside of the open cloak seems to be the heraldic fur "vair". Is is only a lining, or does it tell of the heraldic achievement of the person wearing it, I wonder?

It is indeed vair,and I imagine meant to indicate a fur lining - squirrel - rather than a heraldic reference.

Given the absence of any inscription the meaning of the scene has been much discussed. One of the elements in the interpretation is the sex of the third figure wearing a crown, is Leonor de Aquitania or Enrique the young. The scene may well represent the queen led to captivity in 1173 to the castle of Chinon her husband and her three children surround her as a farewell and recognition, Ricardo offers a hawk. Santa Radegunda had rejected her husband Clotario I king of the Franks to enter the monastery of Santa Cruz de Poitiers. According to his life he had freed the prisoners of Peronne in Picardy. This would be after his imprisonment in Chinon one of the reasons for the devotion of Leonor by this saint who had lived like her away from her husband. Leonor would have commissioned the painting for the nartex of the hermitage, converted into a chapel. The hypothesis is still more accurate when relating a devotional act with an episode in the life of Leonor, central character of the scene