Today is the 700th anniversary of birth of the future King Edward III at Windsor in 1312.

There is an online account of his life and reign here and there is also a detailed life of the King by W.M.Ormrod, who has also written a full length study of the reign, from the Oxford DNB, which gives a number of very interesting details about  Edward' s birth, naming and baptism and about his early upbringing, and which can be read here.

King Edward III
A drawing of the remains of the painted figure from St Stephen's Chapel Westminster commissioned by the King, and rediscovered after the 1834 fire.
Image:etc.usf.edu 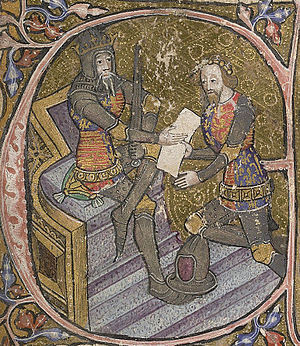 King Edward III enfeoffs Edward Prince of Wales with the Duchy of Aquitaine
Image: Wikipedia
Posted by Once I Was A Clever Boy at 09:32