Were yesterday not Sunday, and therefore the Solemnity of Christ the King in the modern rite, it would have been the feast of St Catherine of Alexandria. An immensely popular saint in middle ages and in subsequent centuries she was dropped from the Calendar in 1970, but reinstated by Pope John Paul II  in 2002. This may have been an opening towards the Orthodox who have retained great devotion to her.


This illustration of devotion to her is taken from the Book of Hours of Marshal Boucicaut, dating from 1410-15. 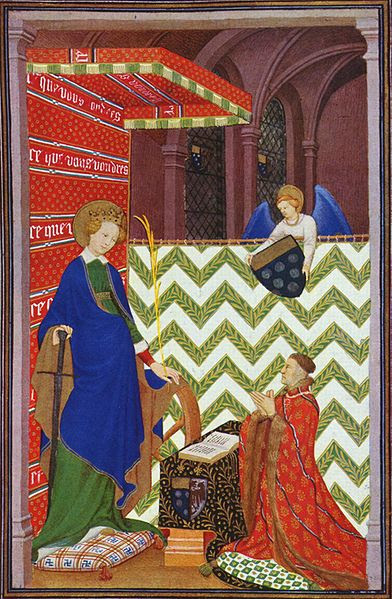 There is an account of the artist, known today as the Master of Boucicaut here  and views of other pages of the manuscrpt can be found online.

The Hours were produced for Jean le Meingre II, known as Marshal Boucicaut following his appointment as Marshal of France in 1391, and who lived from 1366-1421. There is an online life of him here and also an account here.

Hailed in his lifetime as a paragon of the chivalric code  and life of the military elite he was a crusader and jouster who narrowly survived the disaster of the Battle of Nicopolis in 1396, served as the French Governor of Genoa and was finally defeated and captured at Agincourt on October 25th 1415. He had served as commander of the vanguard in the battle. Taken as a prisoner to England he was to remain one of King Henry V's captives until his death in 1421.


I am particularly interested in this phase of his life as he was in the custody of Robert Waterton in Yorkshire for part of this time and it was at Waterton's house at Methley that the Marshal died on June 21 1421. His body was sent back to France for burial at Tours. Part of the house Waterton built survived as part of Methley Hall until its demolition in the early 1960s. Waterton, an emiment and long-serving Lancastrian retainer, was the brother-in-law of Bishop Richard Fleming, and the online Oxford DNB life of him can be read here. My innate modesty forbids me from drawing attention to the authorship of the biography.