The image of St Leo


Today is the feast of Pope St Leo I, the Great, about whom I have posted last year in St Leo the Great.He is of particular interest as the Pope who begins the serious development and understanding of the implications and obligations of the petrine ministry of the Papacy. That theology was expressed, along with other teaching, in his sermons, both profound and elegant - a joy to read when they appear in the Office of Readings.  That fact, combined with a pontificate of twenty one years from 440-461, his famous meeting with Attila the Hun, established him as a key figure in the emergence of the Papal office, as well, of course, as his Tome which shaped the decision of the Council of Calcedon in 451 - "Peter has spoken through Leo "- makes him a crucial figure in the development of the Papacy.There appears to be a degree of consistency in the way St Leo is depicted in early pictures of him, although they are all much later than his lifetime. Nevertheless they may preserve a tradition as to his appearance. 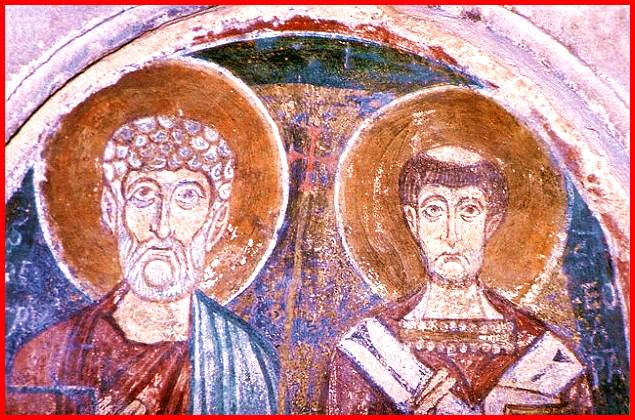 St Leo is shown on the right, paired with St Peter in a fresco, probably of thirteenth century date,
in the rupestrian church of San Nicola at Castelrotto, near Mottola in Apulia.
This painting surely indicates an awareness of St Leo's very concious identification of himself as St Peter's active successor 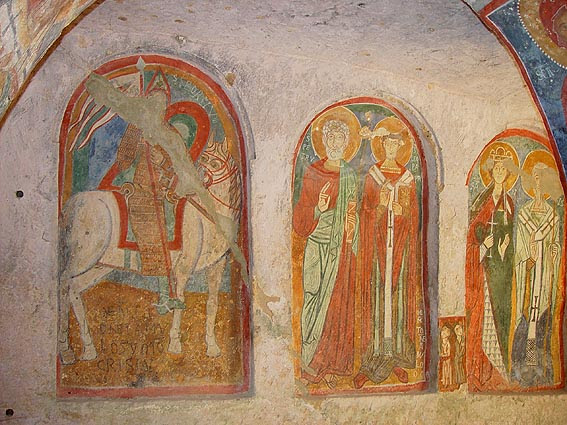 The painting in its setting, which indicates the decorative style of the time as used in such a rock-cut church.
Note the figures of donors between the central and right hand panels.
Image: John Dillon on the Medieval Religion discussion group site
Posted by Once I Was A Clever Boy at 09:20