Today is the feast of St Lawrence, arguably the greatest martyr of the Roman church after SS Peter and Paul. Tradition asserts that he died by being roasted alive on a grill in 258, although some historians doubt if such was a method of execution that would have been used at the time. Maybe it was its exceptional nature which caused it and its victim to be remembered. He was to be a popular saint, with many ancient churches dedicated to him, and he is frequently depicted in art, and having a long tradition of liturgical commemoration

I remember seeing a reliquary with a bone of St Lawrence at Ampleforth abbey in Yorkshire which is dedicated to him. The bone in it was given to the community in their early years as a Bendictine house by King Philip III of Spain. It has a distinctly barbequed look to it.

The collegiate church of the Blessed Virgin Mary at Amaseno in southern Lazio, a twelfth-century structure with later additions, has a blood relic of Lawrence that is said to liquefy every year on this day. There is an Italian-language account with a rather different photograph of the relic here. That page also has views of, and an excerpt from, the church's foundation document of 1177 (or from a later copy?), whose listing of its relics includes one of Lawrence's fat. As there are no reports of the liquefaction prior to the seventeenth century (also the date of the present reliquary), the suspicion has been voiced that the present relic may be an early modern substitution. On this see the following scientific account by Luigi Garlasecchi, the leading investigator today of such blood relics, and there is another proposed explanation (by Marcello Guidotti, in Italian) is here.

There is a whole gallery of photographs of the relic here.

An arm reliquary of St Lawrence of c.1175,
Staatliche museum in Berlin

There also survives this rather extrordinary finger reliquary which is now in the Louvre: 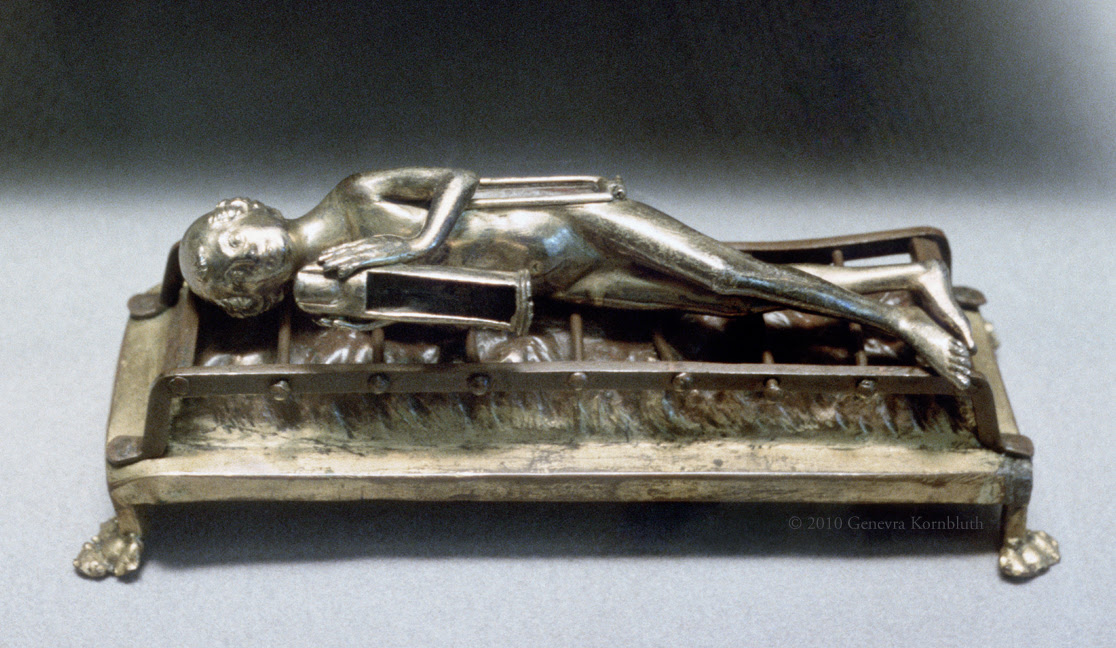