Last Thursday I travelled out to west Berkshire* into the Vale of the White Horse for lunch with two newly-made friends - I had the privilege of being their sponsor at their reception into the Ordinariate in Holy Week.

Despite pouring rain the journey by bus was pleasant, passing through an area I did not know and still lush with late summer greenery. The area has a sense of a less hurried and more traditional rural way of life, and a Betjemanesque sense of discovering architecture and antiquities hidden away down country lanes. Betjeman himself lived at Uffington and then Wantage. The Vale has a sense of slightly brooding mystery which comes, perhaps, from the presence of the White Horse.

The route took me through Faringdon which, from what I have read of it, appears to have an interesting church, which I must try to get to visit sometime. There is something about its history and architecture here. 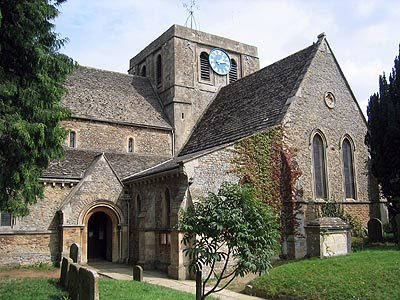 
The church spire was destroyed during the Civil War when Faringdon House was beseiged. Inside the church are the remains of the tomb of Sir Henry Unton (1561-96) who was an Orielensis, and ambassador to France at the time of his death.

I was met by my friends in Shrivenham and we had a most enjoyable time talking over lunch and finding out who were mutual aquaintances and contacts.

The weather prevented us from walking round the village which has a fine mid-thirteenth century church, presumably very much the work of the Abbots of Abingdon who held it in the middle ages. The spire was blown down in 1740 and the present tower replaced it. There is more about the church here.


There is an Oriel connection here as well - Thomas Hughes the author of Tom Brown's Schooldays was baptised here, the grandson of the vicar, and went on to study at Oriel, writing his story around the figure of another Orielensis, Dr Arnold of Rugby. The school Hughes attended is very close to the church and to where I had lunched.

This is an area which I must return to explore more of its history.

* I do not extend diplomatic recognition to the new-fangled post 1974 counties, so here we are in Berkshire, not Oxfordshire.