Today is the anniversary of the beheading by the guillotine of King Louis XVI in 1793. It is often said that as the King mounted the scaffold the Irish born Abbé Edgeworth de Firmont said to him “Son of St Louis ascend to Heaven”. When asked about this in later years the Abbé said he had been in such a state of anxiety he could not recall what he had said. Nevertheless the story has persisted snd the phrase is indeed ‘dignum et justum’. It certainly has much more authenticity then the modern fable of a figure appearing, flourishing the severed head of the King and proclaiming “Jacques de Molay, you are avenged” in reference to the fate of the Grand Master and other members of the Order of the Templars in 1314.
There is a brief biography of the Abbé Edgeworth from Wikipedia at Henry Essex Edgeworth and a much more detailed one from the Irish Times at Abbé de Firmont, the Irish priest who stood by King Louis XVI at his execution 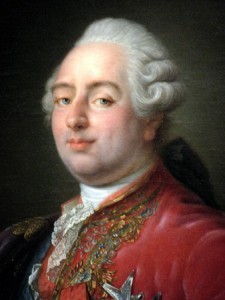 King Louis XVI
Image: alpha history.com
I have not read John Hardman’s Thr Life of Louis XVI published by Yale UP but most reviewers see it as today’s definitive biography of the King, and one that presents a balanced picture of his reign, the issues he faced and balanced his personal gifts and strengths with his ultimately fatal tendency towards irresolution until it was too late. It certainly appears to dispel the idea of the King as a lumpen plodder. Whether he could have reigned over a series of sensible and presumably ongoing reforms - which he would have supported- designed to bring France into alignment with other European countries - is the crucial question, and one for which there is not time nor space here.
It was not just the “Ancien Regime” as described by Tocqueville or as used for the century and more preceding the outbreak of the revolution in 1789 that was symbolically destroyed along with the King in 1793. It was a constitutional dispensation that reached back through the Bourbons, the Valois and the Capetians, and before Hughes Capet and his descendants, the Carolingians and right back to thr Merovingians and the baptism of Clovis in 496. It was these ancient, mysterious and undoubtedly sacral origins of French kingship, of the French nation, indeed of a wider Christendom, that were symbolically attacked in killing King Louis XVI. So if the Abbé did so address the King in his last earthly minutes it was perhaps an inspired phrase. As a Bourbon he was the descendent of St Louis’ - King Louis IX - youngest son and the personification of the extended Capetian line and its antecedents.
In the nineteenth century there was of course a cult of the King, his Queen, their son snd his sister Mme. Elisabeth. This was not only in the Restoration era but after 1871 when Royalism was still a force to be reckoned with. Nowhere is that more strikingly displayed than in the decoration of the apse of Sacré Coeur atop  Montmartre and looking down on the city where the King was killed. In the decoration the kneeling King, Queen, Dauphin-King and Mme Elisabeth are shown kneeling in prayer  before Christ. It is a forceful evocation of a France both Catholic and Royal built in three Third Republlic and still a focus of devotion under the Fifth.
Posted by Once I Was A Clever Boy at 23:01

How does Napoleon III historically fare as a Catholic?
-Andrew