Today is the Feast of St Andrew the Apostle.
There is a useful introduction to the scriptural material about him, the early legends and the diffusion of his cult in the Wikipedia article Andrew the Apostle. This has useful sections about his patronage and the growth of devotion to him in Scotland.
Customs linked to today as his feast are outlined in St. Andrew's Day 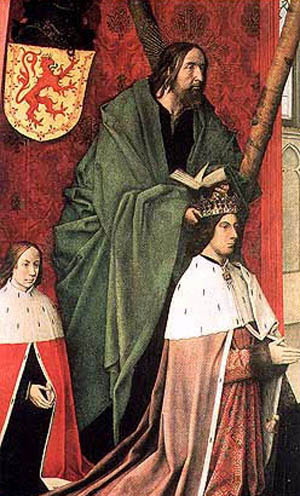 St Andrew crowns King James III of Scots (1460-88). The future King James IV kneels behind his father.
From the Trinity Panels by Hugo van der Goes (d. 1482)
Image: Royal Collection/National Galley of Scotland/History Answers
The Wikipedia article suggests the cult of St Andrew in Scotland began in the mid-eighth century when relics arrived there from northern England, and linked to St Wilfrid, who was, of course, noted for his links and visits to Rome. A century or so later it appears St Andrew was seen as their patron by the Scots from the battle of Athelstaneford. At the end of the thirteenth century the figure of the crucified St Andrew was used as the design for the seal of the Guardians of Scotland during the interregnum of 1290-94 and the Declaration of Arbroath of 1320 refers to him as patron. His relics gave prestige to the church which enshrined them and to its primatial bishop, and from 1472, Archbishop, of St Andrew’s, together with its attendant University.
The Most Noble and Most Ancient Order of the Thistle is under the patronage of St Andrew. The claims to its antiquity before 1687 are at times clearly pious fictions, but it may be that Scottish monarchs from the time of King James III did attempt to establish a chivalric Order to match those of their contemporaries. The inventory of the possessions of King James IiI made after his death in 1488 does record a collar and badge much like that of the present Order, and it, or a similar one, is shown encircling the Royal Arms in the image of King James IV from his Book of Hous and being worn by King James V in paintings.
Click on the link below:

King James IV (1488-1513) with St James the Great from his Book of Hours. After 1503.
Image: Oesterreiches National Staatsbibliotek
The green mantle of St Andrew in the Trinity Panel and the hangings of the entrance to the chapel in the Book of Hours may both be seen as a reference to the mantle of the Order of the Thistle.
It may be that the frequent royal minorities of the Stewart monarchy prevented earlier forms of the Order achieving stability like that of the Garter. There is a history and description of the Order which records and evaluates this early evidence at Order of the Thistle
St Andrew Pray for us
Posted by Once I Was A Clever Boy at 23:36