Yesterday I booked myself into an online seminar from the Warburg Institute that was accessible through Zoom. The speaker was Anna Forrest who was talking about the discoveries under the attic floorboards at Oxburgh Hall in Norfolk during restoration work on the roofs. This process is continuing and it is hoped that more discoveries will be made.

Oxburgh Hall
Image: Wikipedia
The ancestral home of the Bedingfield family who built it in 1482 Oxburgh is notable both as an example of a late medieval brick built moated fortified manor house and as a Catholic home throughout its history. Material from the Bedingfeld family archives, which is currently on display at the Hall indicates the importance of the family as leaders amongst the Catholic Norfolk gentry as supporters and servants of Queen Mary I and as committed recusants under the succeeding Elizabethan settlement. Oxburgh still has a priest hole, which is thought to be the work of St Nicholas Owen.
When these discoveries of fragments of manuscript, music and fabrics were first publicised in August I posted about them in Relics of recusant life at Oxburgh Hall
Dr Tessa Murdoch from the V&A gave a response to the seminar paper and wrote an article about the finds in Apollo which can be seen at https://www.apollo-magazine.com/rats-nests-bedingfeld-history-oxburgh-hall/ 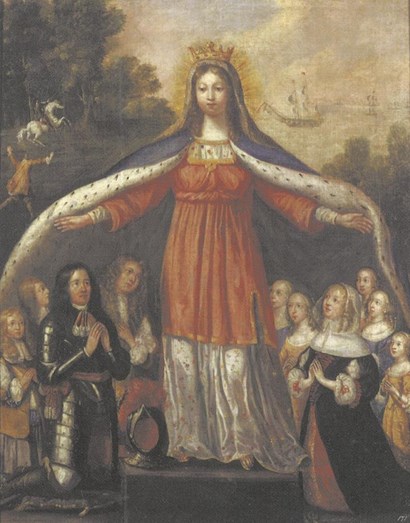