Today is the 640th anniversary of the death at Sheen Palace on June 21 1377 of King Edward III. He was 65 and the longest lived English monarch until Queen Elizabeth I.

It is said that his mistress Alice Perrers snatched the rings from the dying kings hands when she realised what was happening. If the story is true it marks an undignified end to areign of just over fifty years and one mrked by signal victorie sin France and Scotland and was period crucial to the develiopment of English national identity. The King is buried in Westminster Abbey.

The funeral effigy of King Edward III at Westminster Abbey

The King died of a stroke at Sheen Palace on 21 June 1377. A torch lit procession accompanied the coffin which first stopped at St Paul's cathedral. His funeral took place in the Abbey on 5 July and he was buried near his wife's monument in the chapel of St Edward the Confessor. His bones lie in the tomb chest

The wooden effigy, which was carried at his funeral, is preserved in the Abbey collection and the face (a plaster mask fixed to the wood, slightly distorted on the left side of the mouth) is thought to be taken from a death mask.

On his Purbeck marble tomb is a gilt bronze effigy, with long hair and beard, which is possibly by John Orchard. He wears his coronation robes and holds the handles of two sceptres (the rest being broken off). He has small buttons on his cuffs and decoration on his shoes. On the flat  tomb top are niches, some of which still hold small gilt angels. The pillow below the king's head is a replacement from 1871 (given by Queen Victoria), the original having been lost. The lion at his feet (shown in an engraving of 1677) has now gone. The inscription can be translated:

"Here is the glory of the English, the paragon of past kings, the model of future kings, a merciful king, the peace of the peoples, Edward the third fulfilling the jubilee of his reign, the unconquered leopard, powerful in war like a Maccabee.  While he lived prosperously, his realm lived again in honesty.  He ruled mighty in arms; now in Heaven let him be a king".

Originally there were bronze weepers (or statuettes) of twelve of his children round the tomb but only six of these now remain on the south side - Edward the "Black Prince", Edmund of Langley, William of Hatfield, Lionel of Antwerp, Mary of Brittany and Joan of the Tower. (Those that are now missing were to Isabel, Dame de Couci, William of Woodstock, John of Gaunt, Blanche of the Tower, Margery Countess of Pembroke and Thomas Duke of Gloucester, with their enamelled coats of arms below).

Above the tomb is an elaborate wooden tester by Hugh Herland. The arches terminate in half-angels as pendants. The soffit has a rich ribbed vault of six bays with cusping and bosses carved with human and beast-heads, many of which are missing. Four large enamelled shields (showing the cross of St George and the arms of France and England quarterly) remain on the south side of the tomb chest.

A state sword, seven feet long, was traditionally associated with this king and was kept near his tomb for many centuries. Also a shield covered with canvas and black leather, now much mutilated.

During the Great War the effigy was stored in the crypt of the Chapter House. Both effigy and tester were evacuated to a country house during the Second World War.

The funeral effigy,  state sword and the shield will be on show in the new Jubilee Galleries, due to open in mid 2018. 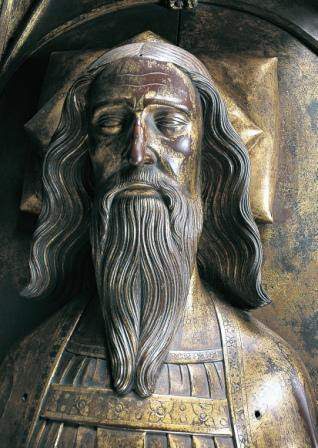 He was succeeded by his grandson King Richard II.