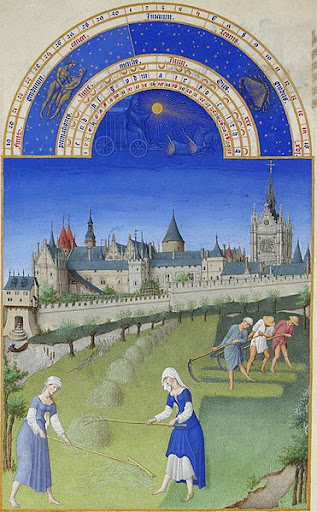 
All three Limbourg brothers, Jean, Paul and Herman, are believed to have had a hand in producing this page, as well as, possibly, Jean Colombe, the artist who continued the work on the Book of Hours in the years 1485-89.

Here, as in the May page, is a depiction of a royal residence in central Paris but it is shown with a rural scene of hay making in the foreground. Once again the image is idyllic - in contrast to the often violent urban life of Paris in these years.

The buildings are the the Palais de la Cité with the Sainte Chapelle, built by St Louis, which is clearly identifiable on the right. In addition to the Chapel considerable  parts of the other buildings still survive. This was the seat of much of the royal administration of Capetian and Valois France, although the King had largely given it up as a royal residence by this date in favour of the Louvre or other palaces.

It was in and around the court that the factions developed which undermined the Valois monarchy in these years. King Charles VI was a sufferer from bouts of mental illness, and his male relatives, notably his brother the Duke of Orleans, and, after his murder in 1407, his son, and the King's cousin, the Duke of Burgundy, vied for power and influence. The Duke of Berry, as an older member of the family, was one who may be seen as seeking to stabilise an increasingly unstable political situation, but he had died on June 15th 1416 and was no longer able to influence events. Into that situation in the summer of 1417 stepped King Henry V and his invasion army.