The Coronation of Francis Joseph as King of Hungary in 1867


On June 8th 1867 there took place the coronation in Budapest of Francis Joseph as King of Hungary.

This followed upon the negotiation of the Ausgleich which created the Dual Monarchy of Austria-Hungary and re-configured relationships within the Habsburg empire. The background to this settlement and its details can be read here. There is a fuller account with several maps here

Like all compromises the Ausgleich can be viewed in different ways. It brought stability to the Habsburg Empire, but entrenched Magyar authority over the whole realm of Hungary. Whereas before a single central authority in Vienna could balance - or play off against one another - the various minorities now power lay firmly over the Kingdom in Budapest with the Magyar elite. The possibility of a genuinely federal union based on historic and linguistic or ethnic divisions was pushed into the background. The Austrian half of the empire developed along more modern lines whilst it might well be argued than the Hungarian kingdom which retained a landowning agricultural model. However that agricultural base fed the whole empire so all did reasonably well.

The prosperity of post-1867 Budapest is obvious from the expansion and development of the capital city and its acquisition in these years of expansive and impressive public buildings on each bank of the Danube, including the restoration of the coronation church, the extension to the Royal Palace and most strikingly the enormous Parliament building with its inherent celebration of the realm's historic constitution.

Relations between the two realms were not always smooth and the Hungarian government acted as a brake on Austrian ideas of siding with France in 1870.

By the early twentieth century nationalist pressure groups were stirring - though how much and to what effect can be debated - and a feeling amongst some, notably Archduke Franz Ferdinand - that the Hungarians ought to be brought into line for the wider good of the Habsburg monarchy, meant that trouble was potentially brewing once the Emperor-King Francis Joseph died. having helped put the Dual Monarchy in place the Emperor-King refused to consider amending a project to which he had sworn.Events, of course, conspired to prevent the Archduke from trying to reconfigure it, and it was still in place when King Charles IV was crowned in 1916. 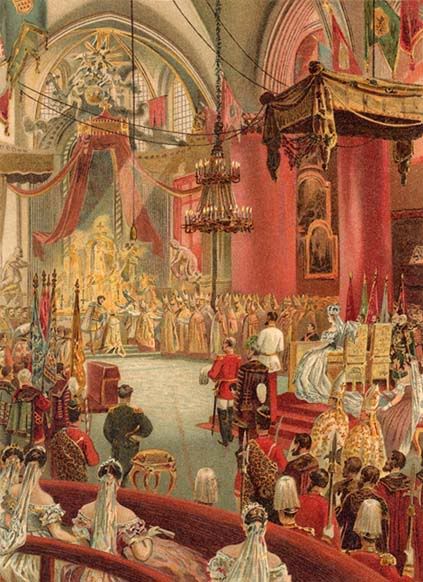 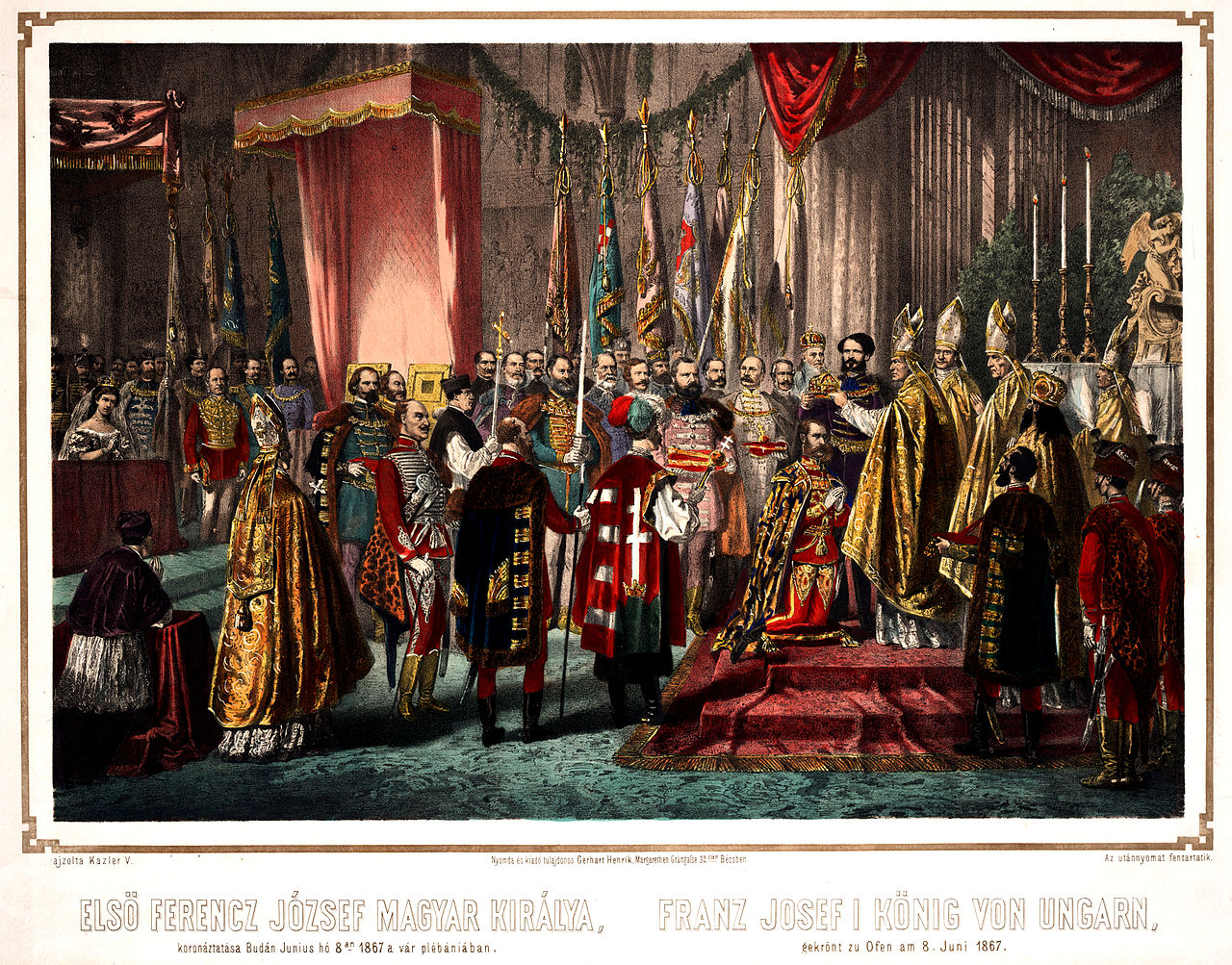 A contemporary print by V.Katzler

The Hungarian King of Arms can be seen in the centre with his tabard and plumed hat.Behind the King and Andrassy is an Eastern-Rite bishop. Queen Elisabeth is on the left

A contemporary engraving of the Coronation

Eastern-Rite bishops can again be seen in the right foreground. The Archbishop of Esztergom is shown here wearing achasuble rather than a cope as in the preceding and subsequent images 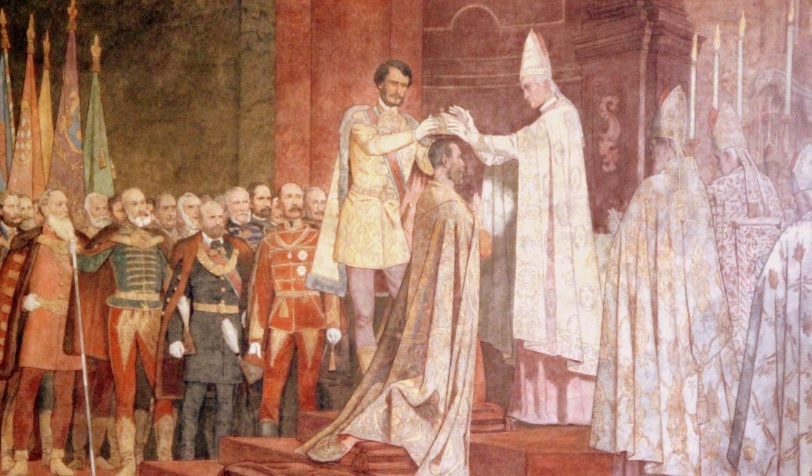 A later painting of the Coronation

The King ceremonially flourishes the sword in defence of the realm

Image: Look and Learn from the Illustrtaed London News June 29 1867 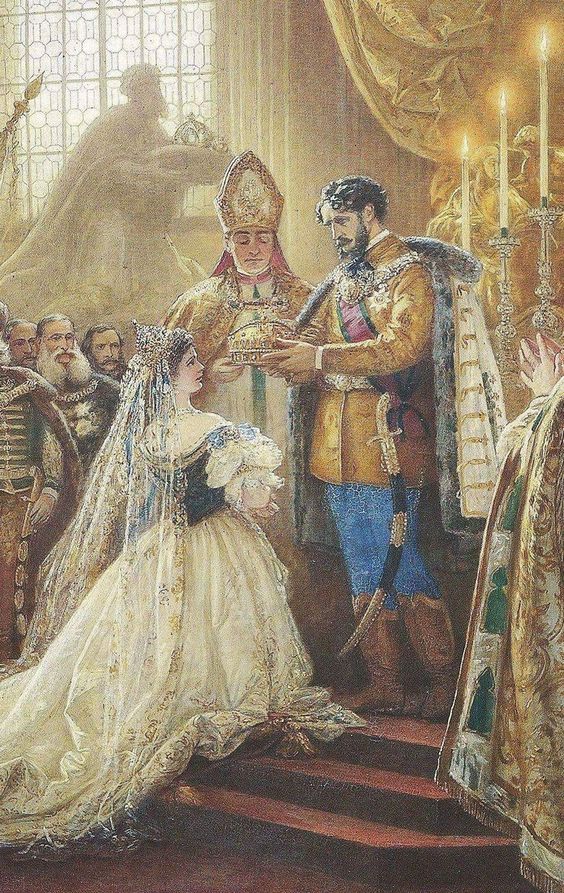 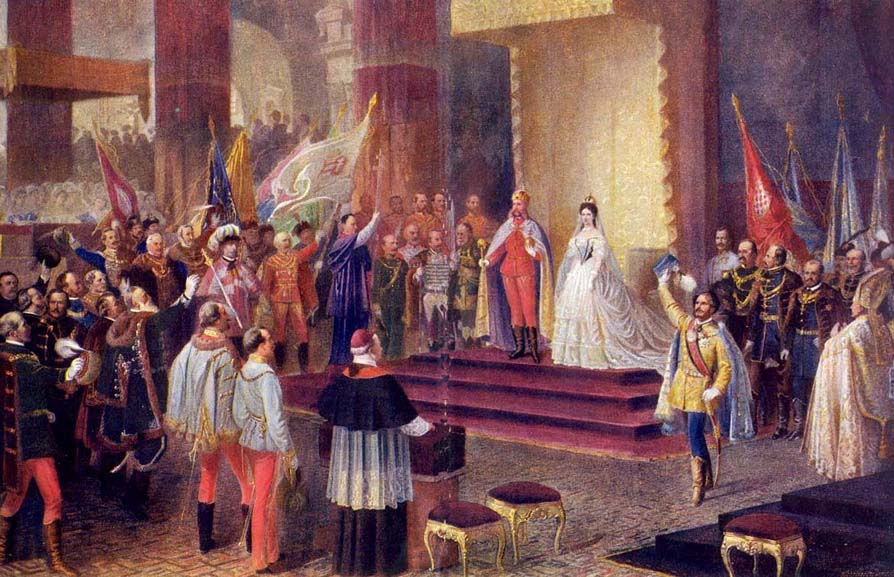 The King and Queen receive the acclamation of their people 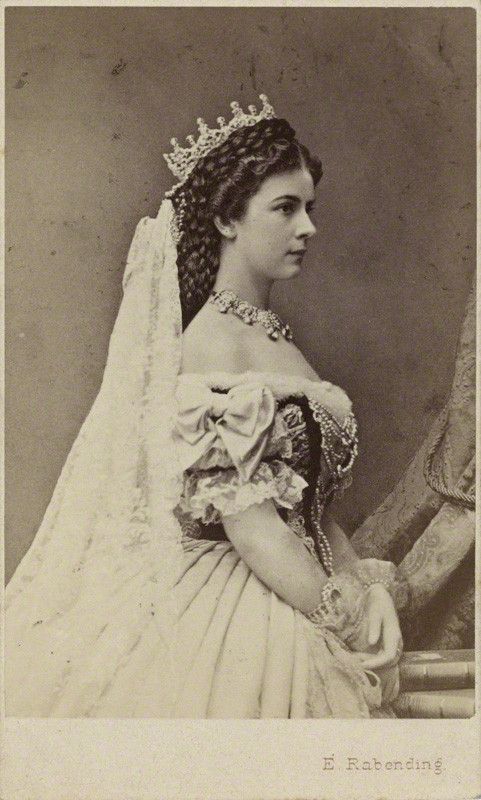 Queen Elisabeth on the day of the Coronation

The following piece by Stephan Gruber is taken from the website The World of the Habsburgs ( Die Habsburger.net):
His spelling still not entirely reliable, the nine-year-old Crown Prince Rudolf gave an account in his school exercise book of the coronation ceremony held in St Matthias’ Cathedral in Budapest. Here, on 8 June 1867, using the Crown of St Stephen, Franz Joseph and Elisabeth were crowned King and Queen of Hungary by Hungarian Prime Minister Count Andrássy and the Primate of the Catholic church:

"In the church there were many magnates and officers, then the music started and the Primate and many Catholic and Greek bishops and very many other priests. Then came Papa and Mama. Mama sat down on a kind of throne, and Papa went to the altar, where a lot of Latin was read out … Afterwards, the drums resounded and Andrássy and the Primate put the crown on Papa’s head. Then the imperial orb and sceptre were placed in Papa’s hands.“

As a result of defeats in Italy in 1859 and against Prussia in 1866, Franz Joseph’s position within the Monarchy had been considerably weakened. This forced the Emperor into a hasty compromise with the representatives of Hungary, something his wife Elisabeth had also strongly favoured. In 1867, Franz Joseph agreed to the Compromise plan, which required the restoration of traditional rights and Hungary’s independence, and which reinstated the old Hungarian constitution dating back to the period before the 1848 Revolution. In personal union, Franz Joseph was now simultaneously King of Hungary and Emperor of Austria, but through the Compromise, the two halves of the Empire were two formally independent states of equal status.

As a coronation gift, the royal couple were given the Baroque palace of Gödöllö. The Swiss envoy did not experience the ceremony in quite the same manner as the young Rudolf, finding it no longer contemporary in all its pageantry: ‘Despite its pomp and veritable magnificence, yet the entire procession gave the detached observer somewhat the impression of a carnival masquerade … This vestige from the Middle Ages simply does not fit with our times.’ The envoy moreover noted the irony of Franz Joseph being crowned by Count Andrássy:

"It gives an extremely strange impression to see the manner in which the man whose death sentence Emperor Franz Joseph had signed in 1849 and whose name was nailed to the gallows in Pest, now, eighteen years later, places the crown on the head of the monarch whose highest confidence he today enjoys.“ 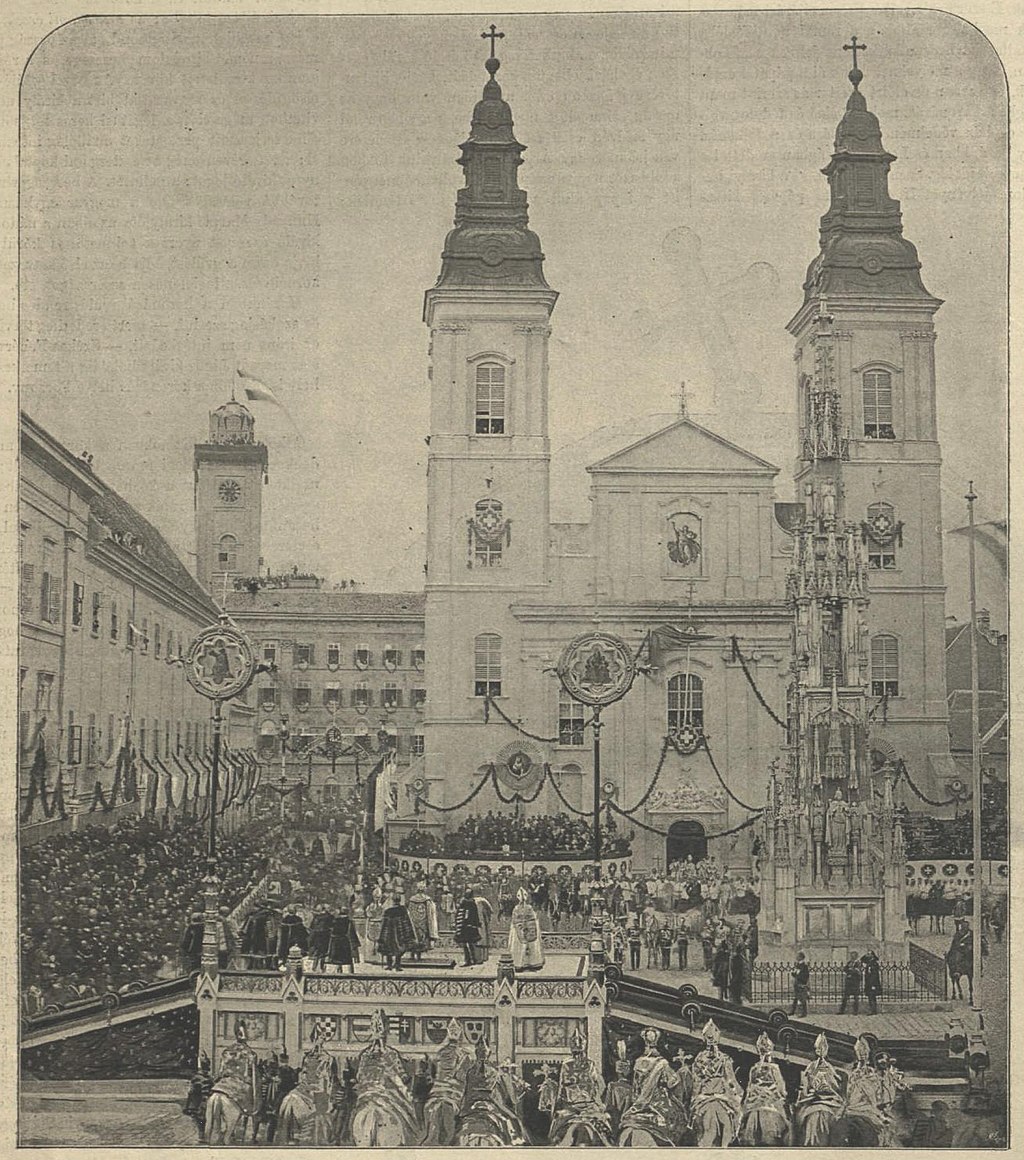 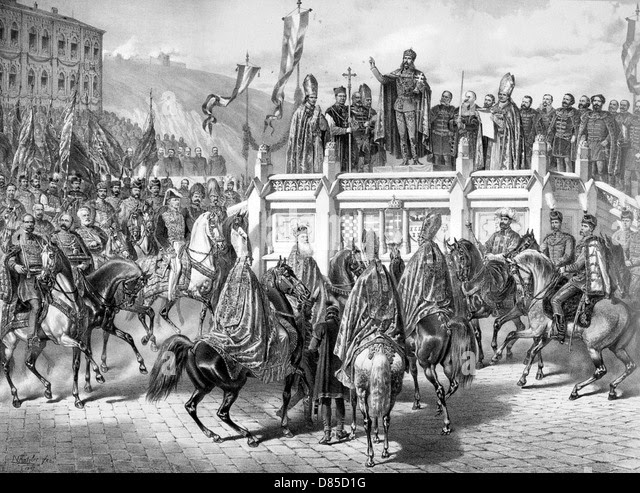 The King taking the Oath 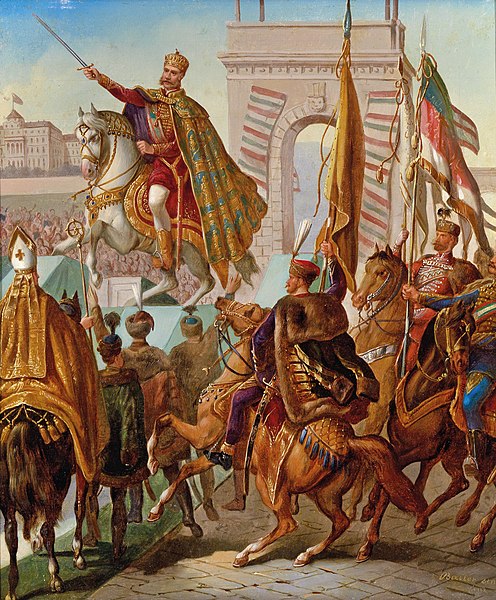 The King rides up the Coronation Hill 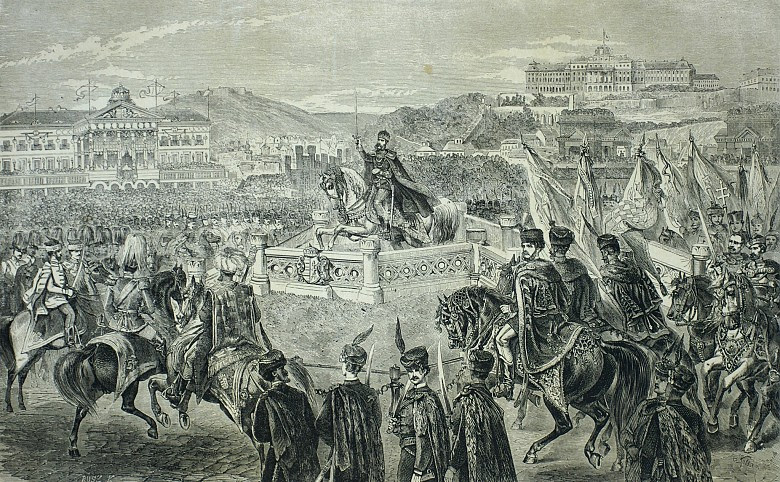 Statues in the Hungarian Parliament commemorating the Coronation of 1867


All in all a veery impressive day and one which marked and symbolised a significant development in Habsburg and Hungarian history.