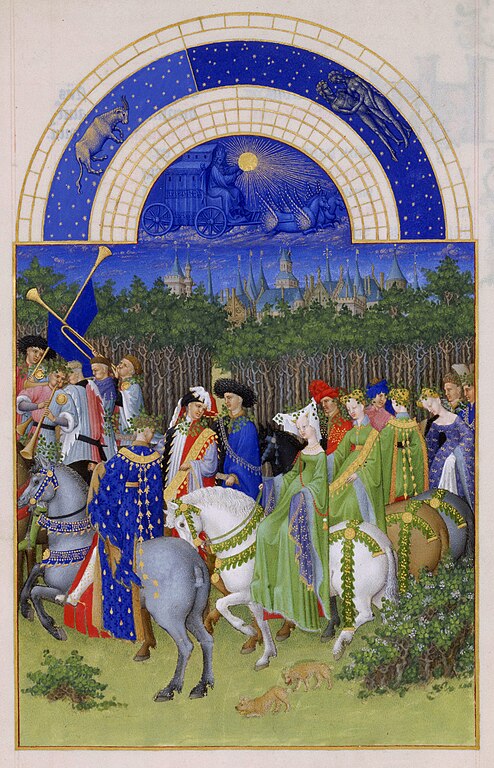 This calendar page from the Très Riches Heures is attributed to Jean de Limbourg.

Here is the aristocratic world of Maying, of courtship and high society in the early fifteenth century. The occasion is the May jaunt, a pageant celebrating the "joli mois de Mai" in which one had to wear green garments known as livree de mai, or at very least as a sign of festivity a garland or sprig of greenery with one's other attire. Looking at the musicians horns or trumpets and simple trombone it must also have been quite a noisy canter through the countryside.

It is an idyllic scene in a world that was far from idyllic, with France beset by internal strife and in 1415 had experienced the first invasion by King Henry V culminating in the English victory at Agincourt. In August 1417 King Henry was back with a campaign of systematic conquest in Normandy. The life of Paris and northern France as recorded in the Journal of the Bourgeois of Paris was grim and violent due to the collapse of the political consensus and the consequent lapse into violent disorder between Burgundians and Orleanists.

The element of escapism is borne out by the fact that in the background, beyond the woodland, is the Hôtel de Neslé, the Duke of Berry's Paris residence, and which was situated on the left bank of the Seine in the heart of the capital.

It is nonetheless idyllic, reminiscent in its ethos of the eighteenth century French school with painters such as Watteau, and a reminder of what the aristocracy - and their imitators no doubt - sought as their lifestyle. This was what life should be like at this time of year, and there was no reason for the artist not to depict it, even if in reality the young men were off fighting and the young women waiting their return in their family chateaux.