Death of Constantine the Great


Today is the 1680th anniversary of the death of the Emperor Constantine the Great at Nicomedia in 337.

Flavius Valerius Aurelius Constantinus was born in Naissus ( Niš in Serbia) on February 27, 272
( although other dates for his birth have been advanced ) and he was proclaimed Emperor in succession to his father Constantius Chlorus at Eboracum - now York - on July 25th 306. Initially one of seven contenders for the Imperial dignity by 324 he was undisputed master of the Roman world and had by the Edict of Milan given toleration, and followed it with generous patronage, to Christianity. There is an online account of his life with links at Constantine the Great


The accession of Constantine, and its consequences, is arguably the single most important event to have happened in the British Isles. As a Yorkshireman one can take especial pride or interest in the fact that it happened in York. Whatever ceremonies attended upon the event probably took place in the Basilica whose remains underlie York Minster. Following the excavations there a collapsed column from it was re-erected outside the Minster and that has now been joined by a modern statue of the young Emperor. 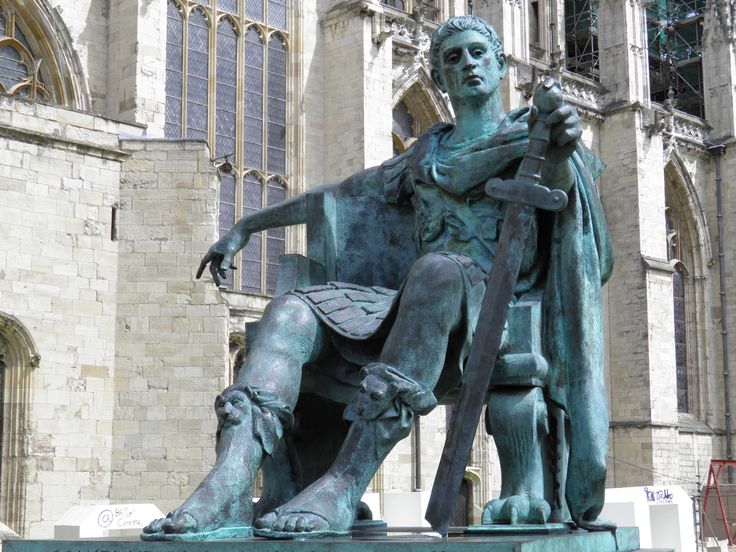 Constantine did not of course remain long in Eboracum and established  himself in Trier before his conquest of Italy and then of the East and the establishment of Constantinople as the new Imperial capital.

One of his features as aruler was aconcern with his image, and was very much in the tradition of his predecessors in that respect. However with his adoption of Christianity new stylistic issues emerged. 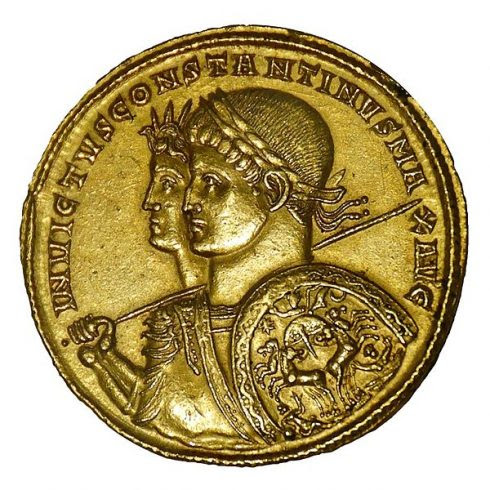 Medallian issued by Constantine from Ticinum in 315.
As recorded by Eusebius the Emperor has the chi-rho on his helmet

From his residence in Rome after 312 there are the remains of a statue, made out of marble and bronze around a brick core.

Dated to 312-15, and probably reworked after 325, the 40 foot high enthroned statue proclaimed the authority, the quasi-divine authority, of the Emperor. That did not prevent it being pillaged in late Antiquity, and the marble portions of it were only rediscovered in 1486. 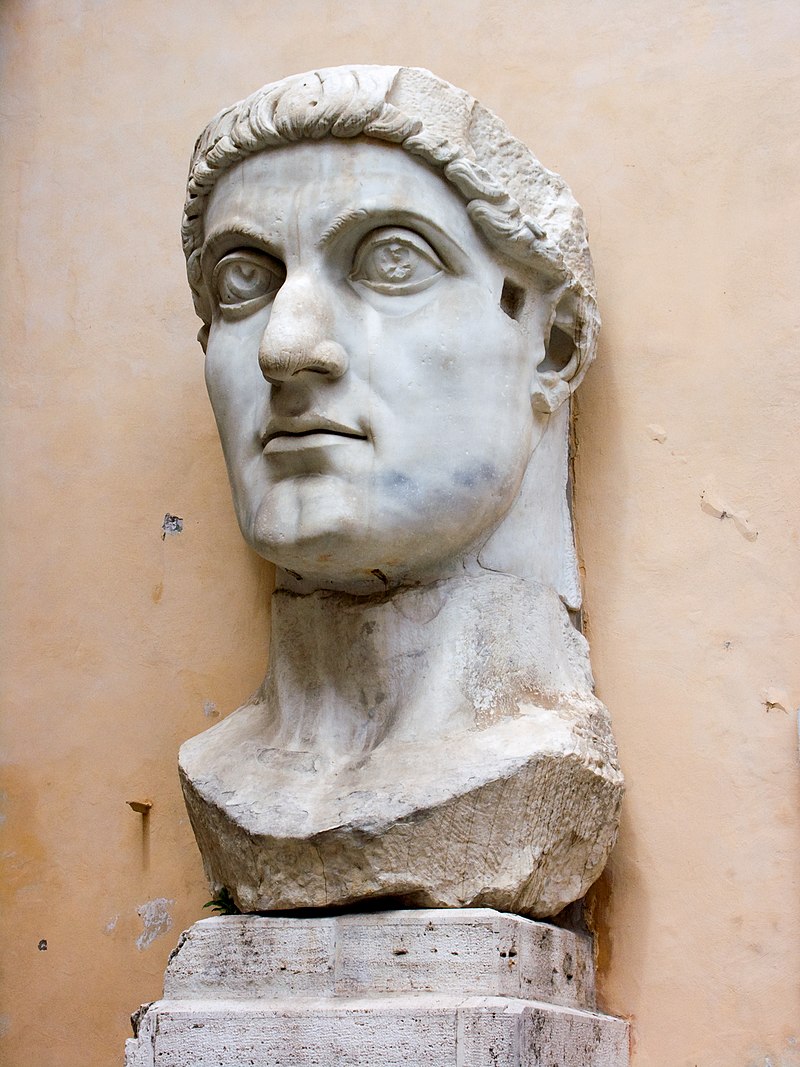 A gold medallion from the later part of the Emperor's reign was auctioned by Bonhams in Los Angeles in 2015. This still portrays the Emperor as a young man, just as Augustus was always so depicted. 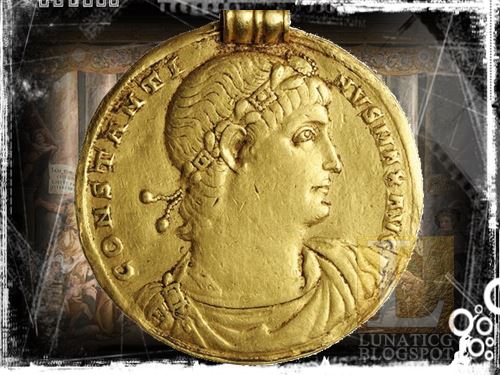 Few 4th century gold medallions of this significant size — a diameter of 48.8 mm and weight of 41.88 g — have come to market in recent years. Gold medallions such as this were typically gifts given by the Emperor to high-ranking individuals of the empire, both military and civilian. They were also presented to ambassadors and chieftains on important occasions in hopes to impress them.


The Director of the Rare Coins and Banknotes Department at Bonhams, Paul Song, states, "Having handled two of the most valuable collections of ancient coins ever offered at auction, this particular gold medallion of 9 solidi size was not in either collection, making this an extremely rare find. It is of the highest importance to the advanced collector. The fact that Constantine the Great, himself, would have almost certainly handled the coin in question further adds to the allure and desirability of this incredible item." 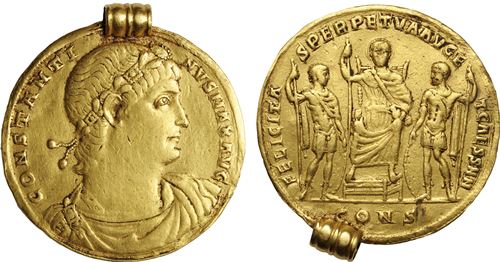 These medallions were true multiples of gold and silver coins and could legally be used as money. This particular piece of ancient currency illustrates a bust of Constantine wearing a rosette diadem. On the reverse, Constantine is seen with a nimbate or halo, which is often found on Byzantine coins. He is seated on his throne while holding his staff in his right hand and the cherished plant, acacia, in his left. His two sons, Constantine II and Constantius, stand on either side of Constantine in their military attire, each holding a spear and shield.


Historians have placed this coin's creation after May 11, 330 A.D. (the consecration of Constantinople). Therefore, this remarkable coin may be one of the earliest productions of the Constantinople mint.
Images and text: Bonham's and lunaticg.blogspot.com

Despite his patronage and munificence towards the Church, and not least his his convocation of the Council of Nicea, it was not until he was on his deathbed that Constantine was baptised. One suggestion is that he was planning to travel to Jerusalem for baptism but that his final illness overtook him early on his journey and hence his death in the old Eastern capital of Nicomedia.

" The destroyed church of the Holy Apostles at Constantinople, known only through a description by Eusebius of Caesarea, was begun in 333 and completed by Constantius II (337–361). It was cross-shaped, and a drum—a cylindrical or polygonal wall that usually supports a dome—rose above the crossing, probably covered by a conical wooden roof. The sarcophagus of Constantine stood in the centre, surrounded by memorials to the 12 Apostles. It was less a church than a mausoleum in honour of the first Christian emperor, who was made to appear in that church as the 13th Apostle."

The church as rebuilt two centuries later under the Emperor Justinian is shown in these images from the website Byzantium1200.com together with their notes: 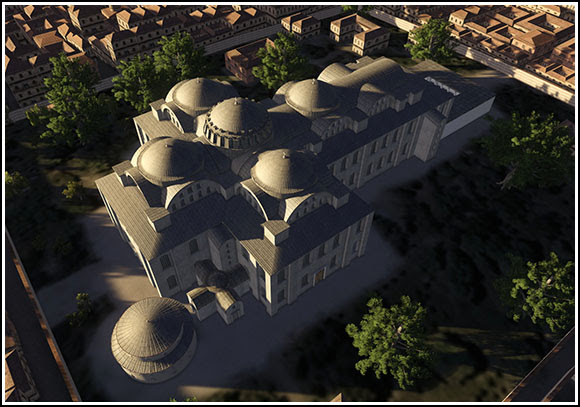 The Church of the Holy Apostles was first built in the fourth century, in a cruciform shape and attached to the round mausoleum of Constantine on the highest hill of the newly founded city. In the time of Justinian I the church was rebuilt completely on a larger scale, leaving Constantine's mausoleum intact and adding a second cruciform mausoleum. Most emperors and their wifes were buried there until the 11th century. The church of the Holy Apostles had at least the same overall size as the Hagia Sophia; was erected on the groundplan of a Greek cross, had one dome with windows over the centre and four domes without on the cross arms. However, the details of construction are much disputed, since no part of the building survives and the later copies in the west like San Marco in Venice or Saint-Front in Périgeux seem to imitate the original building quite freely. The church was given to the Greek Patriarch after the Ottoman conquest in 1453, but then demolished in 1456 and subsequently replaced by the big Mosque of Mehmet Fatih. 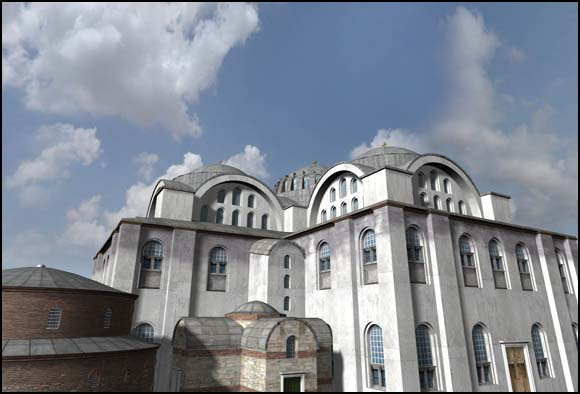 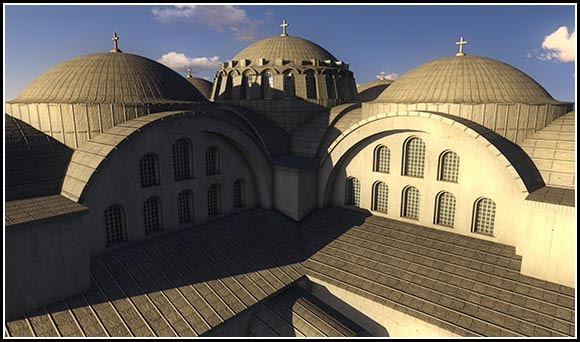 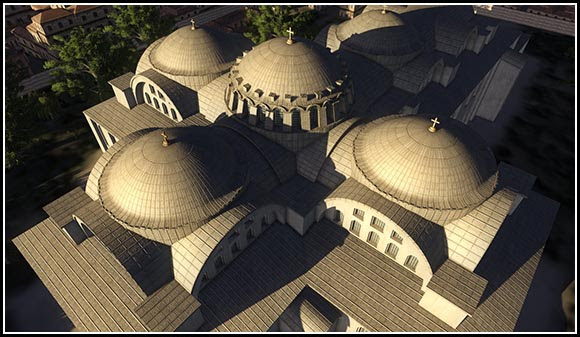 His burial church may have gone, and possibly only apart of his sarcophagus survives, but there can be no doubt that few rulers have had so long lasting an impact on the life of the world as Constantine the Great.