Feast of SS Nereus and Achilleus and of St Pancras


This morning I went to a Mass celebrated by Fr Antom Webb at the Oxford Oratory to mark the tenth anniversary of his priestly Ordination.

Fr Webb was ordained on feast of SS Nereus and Achilleus in 2007in the Oxford Oratory, of which he was then a member. This is a feast always important to Oratorians and their church in Rome became Cardinal Baronius' basilica. Fr Anton subsequently left the Oratory and now ministers as a Prison Chaplain and Parish priest in the diocese of Northampton.

If you are wondering who these two saints were here is the Third Reading from this morning's Office of Matins:

The brothers Nereus and Achilleus were eunuchs of Flavia Domitilla and were baptized by St. Peter at the same time as she herself and her mother Plautilla. Because they persuaded Domitilla to consecrate her virginity to God, they were accused of being Christians by Aurelian, who had been betrothed to her, and were sent to the island of Ponza. Soon afterwards, they were scourged in an effort to make them sacrifice to idols, and were taken to Terracina, where, after they had overcome the torture of the rack and flaming torches, they were beheaded. Their bodies were taken to Rome by their disciple Auspicius and buried on the Ardeatine Way. As for Flavia Domitilla, who had received the sacred veil of a virgin from Pope St. Clement, she also was deported to the island of Ponza, and after a long imprisonment was taken to Terracina. There, by the judge's orders, her dwelling was set on fire, and she won a glorious death, along with the virgins Theodora and Euphrosyna, her foster-sisters, on May 7, under Emperor Trajan. Their bodies were buried by the Deacon Caesarius.

There is more about their cult at Saints Nereus and Achilleus 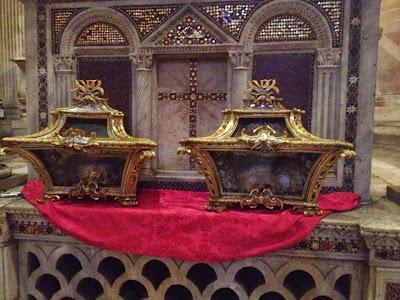 The Relics of SS Nereus and Achilleus

It is also the feast of St Pancras. Of him the Breviary says that he was born of a noble Phrygian family, was baptized in Rome at the age of fourteen. Under the Emperors Diocletian and Maximian, he was arrested; and when he firmly refused to sacrifice to the gods, he was beheaded and so won the glorious crown of martyrdom. His body was buried secretly on the Via Aurelia by the matron Octavilla.

There is more about him at Pancras of Rome which includes folklore about him and other Ice Saints and why his cult developed in England, and there are more general links at St._Pancras

It was a happy occasion upon which to meet up with Fr Anton and other friends from the Oratory to help him celebrate this anniversary - and to reflect on how quickly time seems to pass...