The Latin Patriarch of Jerusalem Emeritus at the Oxford Oratory


As I arrived this morning to do my shift as porter in the Oxford Oratory bookshop I encountered in the forecourt one of the Fathers in cassock and white stole blessing a parishioner's cat before it went for a vetinary examination .... so just a normal day at the Oratory I thought. Well no, it was n't, and not for feline reasons.


One of my volunteer colleagues told me that the Latin Patriarch of Jerusalem Emeritus was coming to celebrate a Mass later in the morning. Due to some misunderstanding the celebration had been transferred at short notice to the Oratory from the chapel of Exeter College.

So later in the morning I was able to take some time off from my shift and to witness His Beatitude Fouad Twal, successor of St James the Brother of Our Lord, celebrate Mass in the church.

His homily made the eloquent and telling point that his was very much the church of Calvary. He spoke of the problems facing Palestinian Christians and the need for dialogue. He also spoke of their schools and hospitals, which are open to all and of the need to care for refugees.

His community is distributed between Cyprus, Israel, Palestine and Jordan, and he urged his hearers to visit and speak to the Christians of the Patriarchate. They are 2%, possibly 3%, of the population in Jordan, where there is stability.

His Beatitude is in Oxford to take part in a debate on religious liberty at the Oxford Union tonight. There is an online biography of him at Fouad Twal

With the risk of some slight repetition  and as it gives more details of his homily I have copied the more detailed account of the Patriarch Emeritus's visit from the Oxford Oratory website as follows:


Today we were delighted to welcome the Latin Patriarch Emeritus of Jerusalem, Fouad Twal. His Beatitude is visiting Oxford to take part in a debate at the Oxford Union on the interplay between religious freedom and civil liberties.

As part of his visit, his Beatitude celebrated a votive Mass for persecuted Christians in our Church. 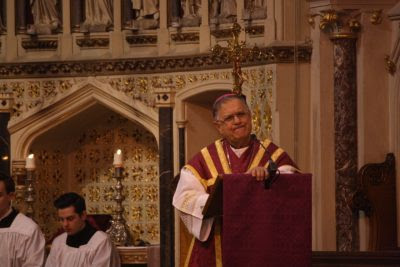 There are currently 10,000 Christians living in Jerusalem, who are very much a minority. The Patriarchate is responsible for a diocese spanning four states: Israel, Palestine, Jordan and Cyprus. Across those areas, the Church runs schools that serve 75,000 students, and 11 hospitals in Jerusalem alone. Despite being very much a minority in Jerusalem, Christians are able to provide a strong witness of their love of neighbour, and in some areas the Church flourishes. His Beatitude gave the example of the Church in Jordan, where numbers of young Christians are so strong that he advised arriving an hour early for Mass in order to get into the church.

As a result of persecutions, many Christians are leaving the Holy Land. The Patriarch asked our continued prayers for the Church in these parts, but added that a very practical way of supporting persecuted Christians is to visit Jerusalem as pilgrims and tell others what we have seen. He ended by expressing his trust in Our Lord's promise, ‘I am with you always’ (Mt 28:20). 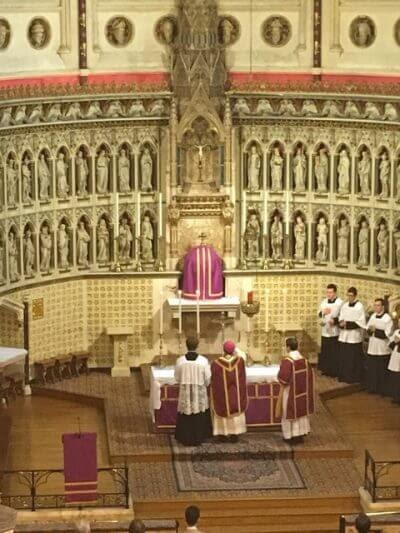 Otherwise perhaps it was an ordinary day at the Oxford Oratory...