450 years ago today at about 2am an explosion at the house at  Kirk O’ Field on what were then the outskirts of Edinburgh - the site is now occupied by the main quadrangle of Edinburgh University - apparently killed the 21 year old King Consort Henry, better known to history as Lord Darnley, together with his servant. Further examination showed that they had in fact been strangled, probably whilst seeking to flee the planned explosion. There is an online account of his life at Henry Stuart, Lord Darnley and the excellent biography by Elaine Finnie Greig in the Oxford Dictionary of National Biography ‘Stewart, Henry, duke of Albany [Lord Darnley] (1545/6–1567)’, (2004) can  be read at here

I have extensively adapted, corrected and supplemented a post from the website Royal Central about Lord Darnley, as he is best known. It was written by Peter Anderson:

Around 2:00 am on the 10th February 1567 the area around Kirk O’ Field in Scotland was rocked by two large explosions. Following them, two people were found dead in a nearby orchard. One was Lord Darnley, and the other his valet.

Henry Stuart, Lord Darnley was born in Temple Newsham in the West Riding of Yorkshire in 1545 the son of Matthew Stewart, Earl of Lennox and his wife Margaret (nee Douglas). Brought up a Roman Catholic, he had claims to the thrones of both England and Scotland through his parents. Matthew had been third in line to the Scottish throne. However, having sided with the English at the time of the Rough Wooing - the attempt to marry King Edward VI to the infant Mary, Queen of Scots he fled to England. Margaret was the daughter of Margaret Tudor, one of the sisters of Henry VIII, who married, as widow of King James IV and mother of King James V, Archibald Douglas.

What I had not realised was how much Darnley can be accounted a Yorkshireman, not only being born at Temple Newsham but apparently brought up there or at Settrington in the East Riding until he travelled to France in 1559.

He received a very good education, and in 1559 he was sent to the French court where his cousin Mary, Queen of Scots who had married the Dauphin Francis had become Queen Consort of France following the death of King Henry II. Though Mary became Queen of Scotland, she had ruled through regents as she was only seven days old when her father died. Her husband  King Francis I and II died in 1560, and she returned to the Scottish Court.

Some five years later, in mid-February 1565, Henry was presented to Mary at Wemyss Castle. Contemporary accounts detail Mary’s pleasure at the sight of Henry, and they were married July 29th  in Mary’s private chapel in Holyrood. However, he was leaning towards Protestantism in his faith and did not accompany his wife to Mass after the wedding.

Queen Mary I and King Henry of Scots 1565

After the wedding, Mary soon saw a different side to Henry, one that was disruptive at court sometimes due to drinking. Though the Scottish Parliament had consented to the couple ruling together, Mary would not give Henry the right of Crown Matrimonial, so in the event of her death, he would continue to rule solely as King. In addition to his displeasure over this, Henry also did not like the attention paid to his wife by her private secretary, David Rizzio. Mary had become pregnant, and there was a little question of who the father may be.

Seven months into the pregnancy, Rizzio has knifed and killed in front of Mary, by confederates of Henry who then fled to England, though Henry protested his innocence. Mary gave birth to a child christened Henry James; later he would become James VI of Scotland and then James I of England. Following the birth, it appeared the couple were heading for reconciliation, despite Henry’s continued insistence of wanting the Crown Matrimonial.

Henry was murdered eight months after the birth of his son. Weeks before he had been ill with smallpox and was recuperating with his relatives. However, Mary brought him to be near her at Kirk O’ Field, a two-storey provost’s house fairly close to her residense at Holyrood.

Mary was implicated in his death, rightly or wrongly , married the Earl of Bothwell who was thought to be one of its masterminds, deposed, imprisoned, escaped and and fled to England - and so her extrordinary and tragic life took its course to the block at Fotheringhay. 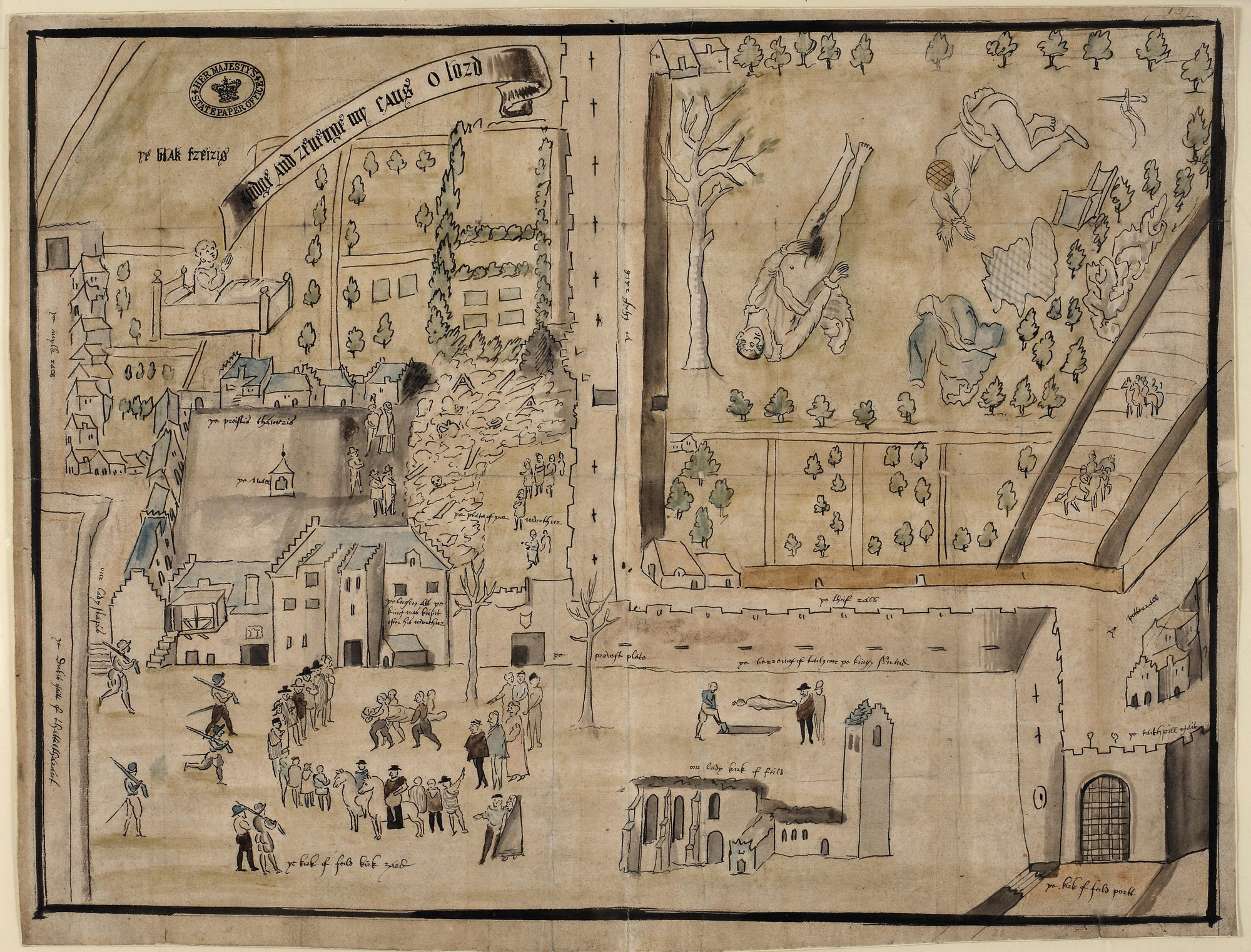 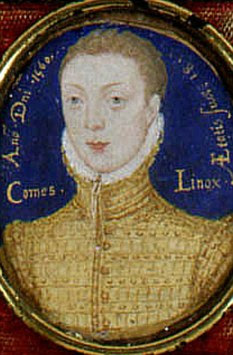 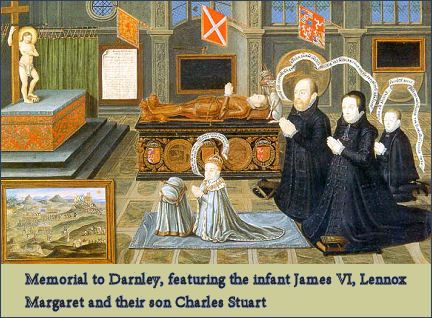 
The painting is in Quuen Mary's Outer Chamber at Holyroodhouse and is part of the Royal Collection. Their website says of the painting:

This painting was commissioned by Darnley’s parents, the Earl and Countess of Lennox, who kneel beside the tomb of their son, with their grandson, the future James VI and I in front of them and Darnley’s brother, Charles Stewart, behind them.

On the tomb are two reliefs, one showing the murder of Darnley and his page as they are dragged from their beds. The other, showing their bodies lying in the garden. In the corner is an inset picture of the encounter at Carberry Hill (15 June 1567); Mary is seen surrendering to the insurgent lords, supporters of the Lennox family. In the distance Bothwell can be seen riding from the field according to the terms of the Queen’s surrender. He fled to Denmark where he was imprisoned and later died.

This picture should be read as a damning indictment of the part played by Mary, Queen of Scots, in the murder of her husband and of her association with the Earl of Bothwell and as a cry for vengeance on Darnley’s murderers. The meaning is driven home by the succession of inscriptions, some of them now illegible. The section referring to Mary’s part in Lord Darnley’s murder may have been erased by her son, James VI.