Today is the sixty-fifth anniversary of the accession of Her Majesty The Queen, and has been termed the Sapphire Jubilee.

In addition amongst exiled or claimant monarchs there are the King of Romania 1927-30 and since 1940, and Emperor-King Otto of Austria-Hungary for the period 1922-2011. 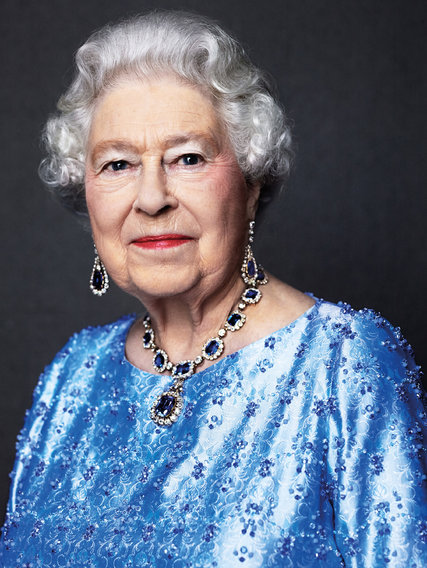 On 6 February 2017, Buckingham Palace re-released an official 2014 portrait of The Queen by David Bailey, wearing the sapphire jewellery which she received from her father, the so-called 'George VI Victorian Suite'. It was a wedding gift from her father, George VI to her on her marriage to Prince Philip of Greece and Denmark in 1947.


A parure is a set of jewellery which normally includes a tiara or diadem; the parure came to true popularity in the 17th century. According to Encyclopaedia Britannica, a parure in around 1700 could mean "earrings, brooch, necklace or clasp, ring and sometimes shoulder brooches or buckles, all set with diamonds" and its design is invariably adaptable, which allows its many component pieces to be reset. Without at least three matching pieces, the suite does not constitute a proper 'parure', and a 'demi-parure' is instead the correct term for a necklace worn alone, together with earrings or a bracelet or brooch. The term 'parure' comes from the French for 'finery' and means 'a set' in the collaborative. The suite of matching jewellery is intended to be worn as an overall ensemble.


The 'George VI Victorian Suite' is part of The Queen's personal jewellery collection and originally was a sapphire and diamond necklace and pendant earrings set. The 'George VI Victorian Suite' is called Victorian, because the stones date from around 1850. It was purchased by George VI from Carrington and Co. The set was altered by Garrards in 1952 to shorten the 18 sapphire cluster necklace by four and again in 1959, so that a pendant could be made from the largest sapphire - however, the suite did not properly become a 'parure' until 1963 when a sapphire and diamond bracelet and tiara were made to match the other pieces. The tiara was made from a necklace that had originally belonged to Princess Louise of Belgium, daughter of King Leopold II of Belgium and wife of Prince Philip of Saxe-Coburg-Gotha. 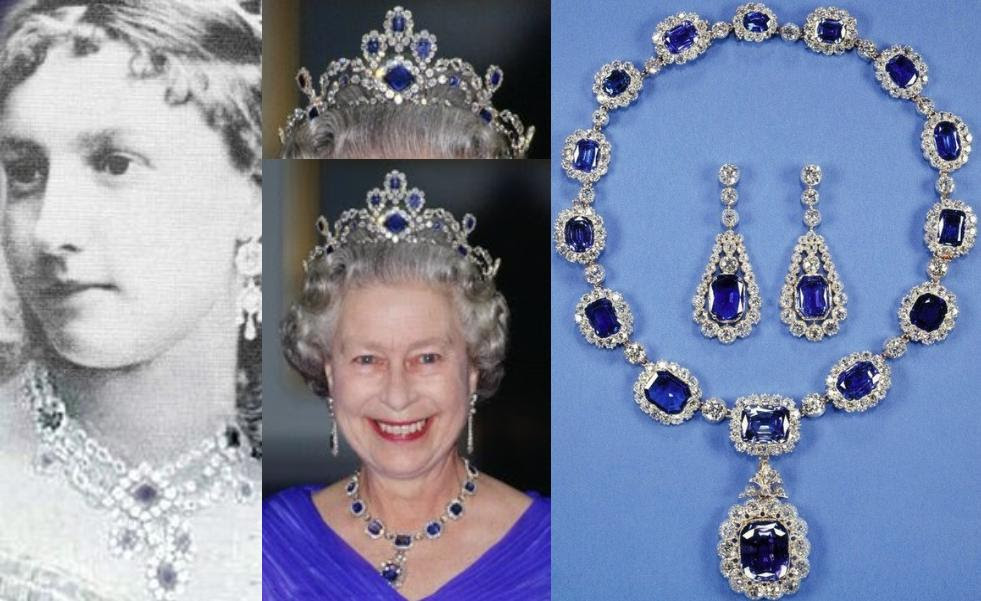 The original owner Princess Louise wearing the necklace, the tiara being worn by The Queen and the necklace and earrings given to her by King George VI

and also in a Daily Mail online article The Queen's spectacular tiaras are the heart of her jewellery collection
from last year. They and other pieces are also featured in The 10 Most Amazing Royal Sapphire Tiaras Of All Time