Today is the 570th anniversary of the death at Bury St Edmunds of Humphrey Duke of Gloucester (1390–1447), prince, soldier, and literary patron.

The excellent concise life of him by G.L.Harriss in the Oxford DNB can be accessed here,
and there is another illustrated account here.  The full length biography Humphrey Duke of Gloucester by K.H.Vickers from 1907, which is still useful, can be viewed on Project Gutenberg here. Humphrey Duke of Gloucester
A sixteenth century copy by J.Le Boucq in a manuscript at Arras


The youngest son of King Henry IV he received his Christian name as a tribute to the family of his mother Mary de Bohun.

I have posted previously about the Duke and the events of 1425 in particular in Stand off on London Bridge.

On Matt's History Blog The Fall of Humphrey, Duke of Gloucester there is a useful account of the Dukes death and place in the events of the time


One of the recipients of Humphrey's patronage was the abbey at St Albans, and it was there that he had chosen to be buried: 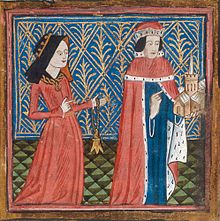 Duchess Eleanor was disgraced and imprisoned after a witchcraft scandal in 1441. Her life and downfall are set out, again with skill and economy, by G.L. Harriss in the ODNB at Eleanor (c.1400–1452). Her alleged principal necromancer Roger Bolingbroke was an Oxford man, principal of St Andrew's Hall. He may well fit in with the contemorary Oxford tradition of astrology - and the risk of serious charges ensuing if politics, let alone the succession to the Crown, was addressed.  There is an account of him and the prosecution at Roger Bolingbroke and a more detailed one with extracts from a contemporary chronicle at  ExecutedToday.com » 1441: Roger Bolingbroke, “hanged, hedyd, and quartered" Eleanor herself, divorced from the Duke, and sentenced to perpetual imprisonment died at Beaumaris castle in Anglesey in 1452.


Humphrey lived in the style appropriate to the son, brother and uncle of Kings, and some hint of that can be seen not only in manuscripts he owned but also in the rare survival of a piece of plate from his collection:

A cup bearing the arms of Duke Humphrey and his Duchess Eleanor,
now in the possession of Christ's College Cambridge 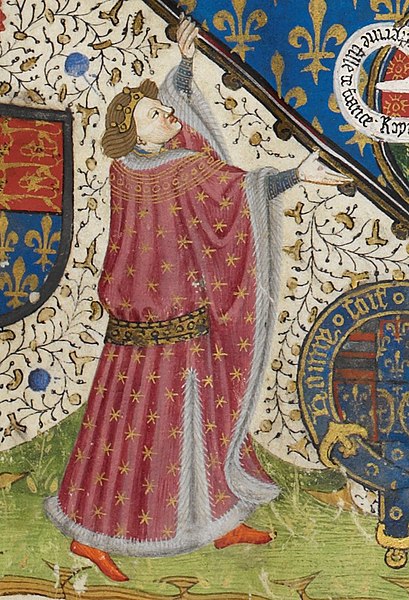 
It was Humphrey who built the first royal residence at Greenwich in the years after 1428 and which was to be taken over by his nephew King Henry VI and his Queen Margaret. renamed the Palace of Placentia and rebuilt under King Henry VII it was to remain an important royal residence until the Civil War, and then, after the Restoration and possible plans for a new royal palace there, to become eventually the great Naval complex we see today. 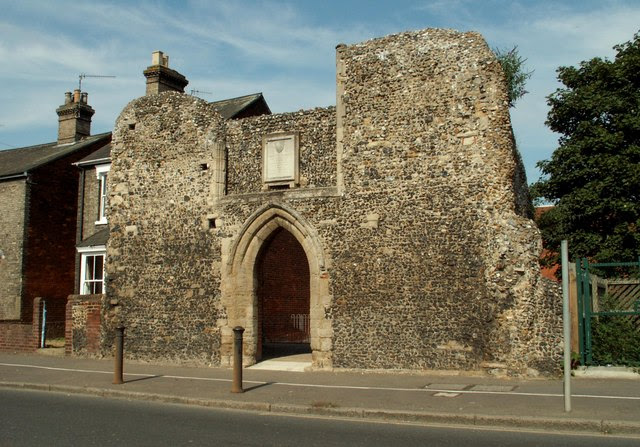 St Saviour's Hospital Bury St Edmunds
The hospital built in 1184-5. This is the lower half of the west range, which was 100ft long


St Saviour's Bury St Edmund's where Humphrey died was the largest of the six hospitals in Bury
and there is the VCH Suffolk account of it here.  A small part of the buildings survive near Bury St Edmunds railway station.

The tomb of Humphrey Duke of Gloucester at St Albans, adjacent to the shrine of the saint

The coffin and crypt of Humphrey Duke of Gloucester at St Albans
The painted crucifix is of great interest. Whether it still survives I do not know.


Thre is an illustrated article about the Duke's tomb, and something about the circumstances of his death and burial, in the article about it as Monument of the Month in May 2010 for the Church Monuments Society here

He has another enduring monument in Ocford - Duke Humfrey's Library, which still uses the older spelling of his name. A book collector and patron of Italian humanists Humphrey made two substantial gifts to the University of  Oxford. In 1439 he gave 129 manuscripts and in 1444 another 134. Oxford responded by adding an extra storey to the Divinity School they were building to house these and their other books and named it in the Duke's honour. The building was not completed until 1488, but it still retains his name. There is more about it, with links, at Duke Humfrey's Library.
The remainder of his library had been promised but went instead to King Henry VI's foundation in Cambridge of King's College. Humphrey's interests and importance in this reception of contemporary culture are considered in the life by Harriss in the ODNB linked to above.

Interior of Duke Humfrey's Library today, as refitted and arranged by Sir Thomas Bodley in 1598

John Capgrave presents his Commentary on Exodus to Duke Humphrey c.1440
This is one of the three surviving books from the Duke's gift still in the Bodleian Library