Today I had a wonderful day out with the Oxford University Heraldry Society. Their visits are always extremely civilised and informative, and this was no exception.

Our main destination was the early eighteenth century Ditchley Park near Charlbury, and we met up at Charlbury Station late in the morning. Before visiting Ditchley itself we went to Spelsbury Church, which contains the monuments of the Lee family, the builders of the house. The church is in origin medieval, but is now very much an eighteenth century reconstruction thereof. Within were the Lee family monuments and a group of coffin plates from the vaults, including that of one of their extended family, the Restoration rake John Wilmot Earl of Rochester. The monuments are a fine selection from the early-seventeenth century through to the mid-nineteenth century

Tomb of Sir Henry Lee (d.1631) and his wife in Spelsbury Church
Their children are grouped arond them on the tomb

After a sandwich lunch at a local pub we drove up to Ditchley - it takes its name from a prehistoric earthwortk in the Park - and wound along atree-line drive to find the house, which is both majestic and approachable, grand yet secreted away. Apart from Blenheim and Heythrop it is probably the most impressive Georgian country house in the historic county of Oxfordshire.

Ditchley Park is now owned by the Ditchley Foundation and I have somewhat adapted and edited the following few paragraphs fom their website:

The South Front of Ditchley Park

The Ditchley estate was bought by Sir Henry Lee in 1580 when he was made the Ranger of the Wychwood Forest, the royal hunting forest based round the hunting-lodge at Woodstock. Queen Elizabeth I visited him at Ditchley in 1592, after he had an alliance with one of her Ladies-in-Waiting without her permission. Annoyed at this, so the story goes, the Queen stayed rather longer than she might otherwise have done, putting her host to considerable extra expense.  The visit is commemorated in the painting by Marcus Gheeraerts the Younger, “The Ditchley Elizabeth”, which shows Elizabeth with her foot on Oxfordshire and her toe on Ditchley.  This hung in the house until 1932 and is now in the National Portrait Gallery.

The Ditchley Portrait of Queen Elizabeth I


Four generations later Sir Henry’s heir, Edward Henry Lee, was created the 1st Earl of Litchfield (sic) in 1676 when he married Charlotte Fitzroy, the illegitimate daughter of King Charles II and Barbara Villiers, the Duchess of Cleveland, both of whose portraits hang in the White Drawing Room.

The first Countess and Earl of Litchfield
Portraits in the White Drawing Room
Image: The Ditchley Foundation

Their son, the 2nd Earl, built the present Ditchley Park in 1722, to a design by James Gibbs, architect of St Martins in the Fields and the Radcliffe Camera.  My reaction to the house was to see that despite its Palladian pavilions and curving links it still looked back to the style of the 1680s - the entrance floor is only slightlty raised, rather than being a piano nobile and the elevations are not those of Lord Burlington, Colen Cambell or James Paine. The interior was richly decorated by William Kent and Henry Flitcroft.

A somewhat curious feature are the misproportions of the staircases which suggest Gibbs was unsure as to how to make his design work out - it is an eccentric feature which mak s the house somehow more rather than less appealing.

In the grounds the fish pond was extended to form the lake in 1746.  After 1760 the Park was “naturalised”, with smooth lawns sweeping down to the lake, and the Great Temple or Rotunda was built in about 1760 by Stiff Leadbetter.

The 4th Earl died in 1776 without heir, and the estate passed to his niece, Lady Charlotte Lee, who had married the 11th Viscount Dillon, an Irish Peer. The Dillons had "Wild Geese" relatives in ancien regime France, some of whom were casualties of the Terror.

In 1807 the 12th Viscount employed Louden to build the Ha Ha, further extend the lake and plant tree avenues, many of which survive today. At that stage the family funds began to run short, so no alterations were made to the house in the subsequent century, when much modernisation altered the character of other country houses 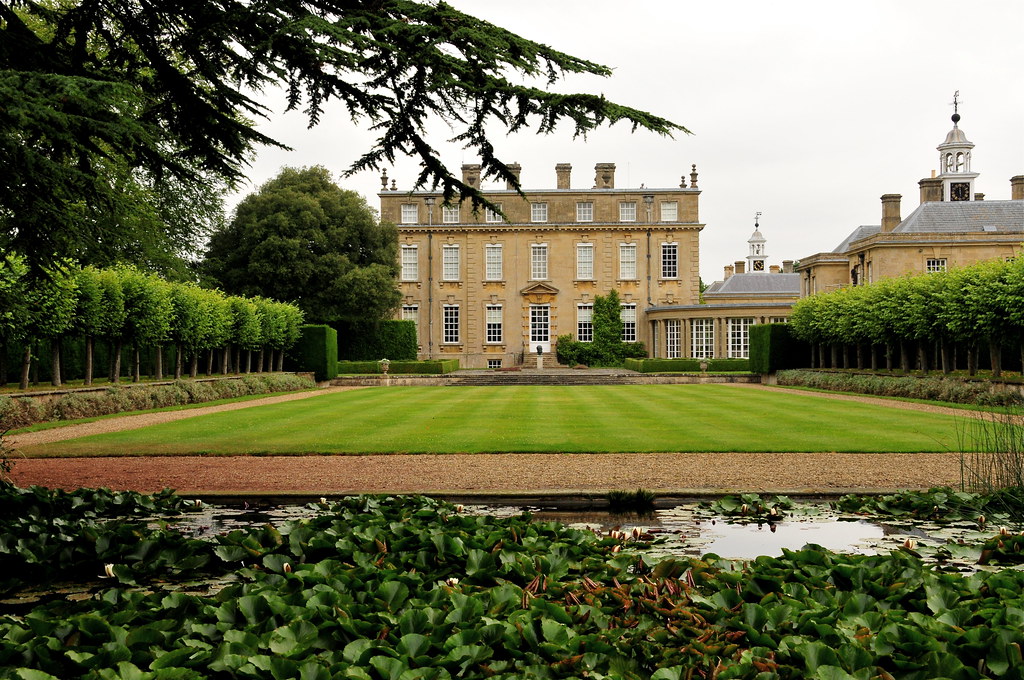 Ditchley Park from the west

The 17th Viscount Dillon died in 1932, leaving his family asset rich but cash poor when faced with the pernciousfact of death duties and the estate was sold to Ronald Tree, the Conservative MP for Market Harborough, a very wealthy Anglo-American (his description). Born here to American parents and educated in England he had returned to the US when his father died in 1914. He met and married Nancy and, after they returned to England, he was elected to Parliament and they bought Ditchley in 1933.  They restored the house sympathetically and with great taste.  Nancy subsequently married Colonel Lancaster, and as Nancy Lancaster became one of England’s premier interior designers as proprietor of Colefax and Fowler in the 1950’s and 60’s. Ronald and Nancy employed Geoffrey Jellicoe, then a relatively unknown young garden designer, to remodel the grounds. He laid out the Italian style sunken garden immediately west of the main house and resurrected the terrace to the north, part of the original Gibbs design. Under the Trees Ditchley regained some of its earlier social prominence, most notably through several visits there by Winston and Clementine Churchill.

Having visited Germany in the mid-1930s Ronald Tree sided with Anthony Eden and Winston Churchill against the more accommodating Government line and  made speeches in the House of Commons warning of Hitler’s intentions.

In 1937 Churchill and Eden visited Ditchley for a house party and clearly enjoyed the Tree's hospitality.  When the Battle of Britain started in 1940 Churchill was advised not to go to Chequers, the Prime Minister’s official country residence in Buckinghamshire, “when the moon was high” (the title of Ronald Tree’s autobiography), as German bombers were expected to attack it - the drive reflected the moonlight and this was thought to make it an easy target.  He invited himself (and members of his War Cabinet) to Ditchley for the weekend of 9-11 November 1940, and subsequently came for a further twelve weekends up to September 1942. Ronald Tree was at that time a Junior Minister in the Ministry of Information charged with fostering Anglo-American relations and invited many influential friends of Roosevelt, including Harry Hopkins, to meet Churchill during his Ditchley weekends.  The early stages of “Lend Lease” were negotiated at Ditchley.

In the general election in 1945 Ronald Tree lost his seat at Market Harborough and decided against a return to politics. He and Nancy divorced in 1948 and his second wife Marietta was disinclined to live in the English countryside.  He sold Ditchley in 1950 and returned to the US, living in New York and the Bahamas for the rest of his life. He returned to Ditchley posthumously and is buried in the churchyard at Spelsbury.


The estate was owned briefly by Lord Wilton, but he found it too large, and in 1953 it was bought by Sir David Wills, a member of the Wills tobacco family and a great philanthropist.  He donated the Mansion and 290 acres of parkland to the Ditchley Foundation, which was formed in 1958.  Sir David’s vision in creating the Foundation was to ensure that the UK and the United States had a venue for strengthening the transatlantic dialogue through discreet and relaxed discussions on matters of mutual concern - Chatham House Rules apply.  The first conference was held in 1962 and they have continued to be held regularly ever since.

The whole website can be seen at The Ditchley Foundation

Ditchley is open to pre-booked parties, but not to individual visitors, so this was an opportunity less readily available to see the building. The house itself is very fine and the Nancy Tree redecoration sympathetic. Though it is run as a conference centre rather than being a family home it did not feel very "institutional" and one could easily imagine it as a house for entertainment on a grand and gracious scale.  We were given a very full and entertaining tour by the Administrator and he vividly recreated the world of Ditchley in the 1930s and 40s.

As you leave you retain a sense of this house hidden away in the trees of the Oxfordshire countryside yet a place that deals in and keeps quiet about matters of public consequence.

This was another splendid OUHS day excursion and I am as always very grateful to all who made it possible.