The Great Fire of London


There have been various online and  newspaper articlesnto mark the 350th anniversary of the Great Fire of London from Sunday September 2nd to Wednesday 5th 1666. 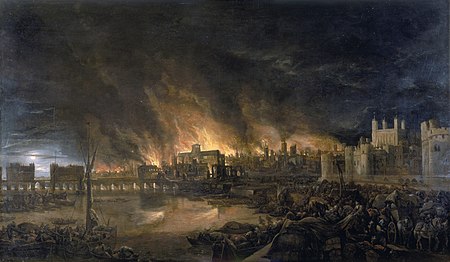 The Great Fire of London by an unknown painter, depicting the fire as it would have appeared on the evening of Tuesday, 4 September 1666 from a boat in the vicinity of Tower Wharf. The Tower of London is on the right and London Bridge on the left, with St Paul's Cathedral in the distance, surrounded by the tallest flames.

Here are links to some online sites which appear interesting:

in addition the modern press has contributed as follows:


The Great Fire of London, 350th anniversary: How did it start and what happened?
The Daily Telegraph
As history would have it, the fire that engulfed London for four days began on Pudding Lane. A baker by the name of Thomas Farriner was blamed for the blaze - something he denied for the rest of his life. Read the full story


How the Great Fire of London unfolded: Official blunders, mass hysteria, and racist violence which threatened to tear the city apart
The Daily Telegraph
It is now 350 years since the Great Fire of London razed the city's medieval heart to the ground. But at such a distance it is easy to forget the human drama which played out as thousands of people lost their homes, their livelihoods, and in some cases their lives. Read the full story

Lost in the Great Fire: which London buildings disappeared in the 1666 blaze?
The Guardian
This week 350 years ago, the Great Fire of London burned through 400 of the city’s streets. Matthew Green reveals the extraordinary structures lost in the blaze – from old St Paul’s to a riverside castle – and what survived, only to vanish later Read the full story

After the Great Fire, London could have looked like Paris. Thankfully, it doesn't
The Daily Telegraph
In the immediate aftermath of London’s great disaster of 1666, the weight of professional opinion favoured the application of rationality to its rebuilding. We were, after all, at the start of the Enlightenment. Christopher Wren was a founding president of the Royal Society, Robert Hooke its secretary and the City Surveyor, and science and art had yet to part ways. Read the full story

The Lord Mayor of London in 1682, when The Monument was completed Sir Patience Ward was a native of my home town and being a diehard Protestant believed the Fire was the work of the wicked Papists and had an inscription to that effect added to the base of The Monument. Removed in the reign of King James II it was reinstated after his overthrow. It was later removed and buried, and then rediscovered in the nineteenth century, but not under re-erected. It inspired Alexander Pope's line about how The Monument "lifts its finger to the skies and lies."