English Iconoclasm II - the fate of the cult of St George


By the time of the English reformation St George was well-established as the national patron saint, but this did not necessarily protect his images from assault and destruction.

We do not know if there was in medieval England anything comparable to Berndt Notke's great figure of the saint from 1489 in what is now Stockholm cathedral:


There is more about this wonderful piece in my post St George and the Dragon.

It is possible that England had similar sculptures, and something along these lines is suggested by the following mid-fifteenth century illumination:

Altar with St George and the Dragon, from a manuscript presented to Queen Margaret of Anjou, wife of King Henry VI by the first Earl of Shrewsbury, and made in Rouen in 1445. Kneeling at the altar are the Knights of the Garter.


When English statues of St George do survive they are usually damaged, and no longer objects of direct devotion or in their original places:

Indeed the ceremonies of the Order of the Garter were purged of "superstition" under King Edward VI.

The fate of the cult, and of images generally is well illustrated by Prince Arthur's chantry in Worcester cathedral.

When the Prince died at Ludlow in 1502 - an event wghich may well be seen as the germ of the English reformation - or at very least the break with Rome in 1533 - he was buried at Worcester and his sorrowing parents commissioned and erected the beautiful chantry that still surrounds his tomb.  On the outside there are still small figures of saints, but the reredos inside bears shocking witness to the events of a generation or so later.


At some point - probably at or after the suppression of the chantries in 1548 - ahammer was brought to bear on the statues, as can be seen below: 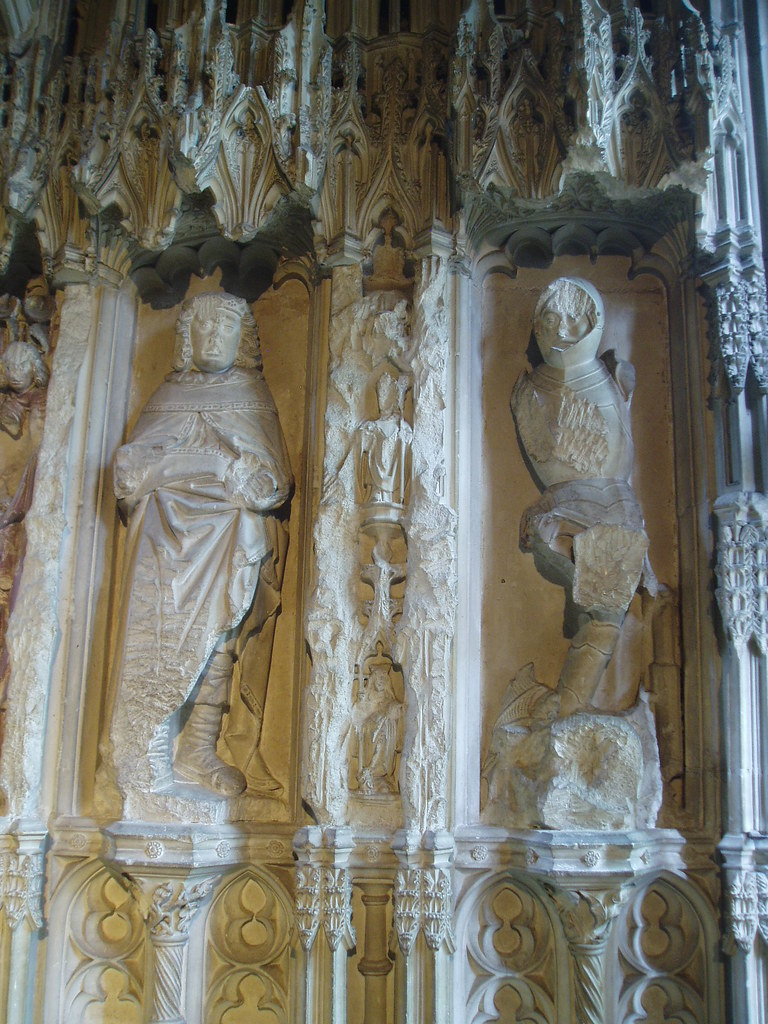 Detail of the reredos in Prince Arthur's Chantry

By contrast in the royal mausoleum of Westminster Abbey the statues survived more or less intact in King Henry VII's chapel there, and on the chantry of King Henry V - chance played no small part in these matters.

A generation later and the Prince's neice, Queen Elizabeth I, was due to visit Worcester in the 1570s. She visited the  tomb, and presumably in advance of her visit, the doubtless embarrassed cathedral authorities had the reredos plasterd over and the Royal Arms ( which had replaced the Rood in parish churches as a focus of alliegance) painted on the blank wall. So it remained until the restoration of the cathedral in the reign of Queen Victoria.

However devotion to aspects of the story of St George did survive. In the city of Norwich, despite its  Protestant tradition, the procession at the Mayor making retained part of the traditional feature of St George, the Dragon and the maiden. Well, at least the Dragon survived... 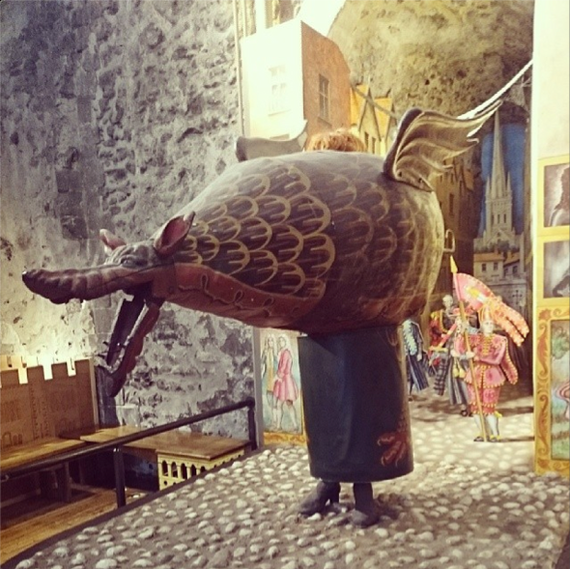 An organisation credited with establishing a significant role for dragons in Norwich is the Guild of St George, founded as a religious guild in 14th-century Norwich to observe St George's Day. It became one of the most powerful and wealthy guilds in the city and developed close ties to the city government. The Guild of St George introduced its annual procession - Guild Day - on 23 April, the date of the saint's martyrdom. St George and Margaret, the maiden he rescued, were represented, and to bring the legend to life Snap the dragon was also introduced. Rushing around, taunting the crowds with wings flapping and smoke shooting from its mouth, Snap soon became a popular element of the procession.
In the late 16th century Guild Day merged with the swearing-in of the city's new mayor. Although St George and Margaret no longer featured in the procession, Snap remained and the procession evolved into a grand civic occasion. Then came the Municipal Corporation Act of 1835, which set out to reform municipal institutions. Civic purse strings were cut and much of the pomp and circumstance of the civic processions disappeared. Snap refused to go quietly, though, and continued to appear occasionally until 1850.

In 1997 the Norwich Whifflers revived Snap, whose traditional design is based on originals now housed in Norwich Castle Museum, and so after a lengthy period of absence Snap is once more part of the Lord Mayors' celebration.


For more detail on the history of ceremonial dragons in Norwich there is  this article by Frank Meeres from the Norfolk Record Office.

There is a more detailed history of the Guild of St George and Snap here and something about its modern revival since 1997 from the website of the Norwich Wifflers here.


It seems to prove that whilst you may be able to keep a good man down you can't keep a good dragon down.