Queen Anne and the Hanoverian Succession


300 years ago today there occurred the death of Queen Anne - notwithstanding the contemporary Oxford quip that she had been dead for years. 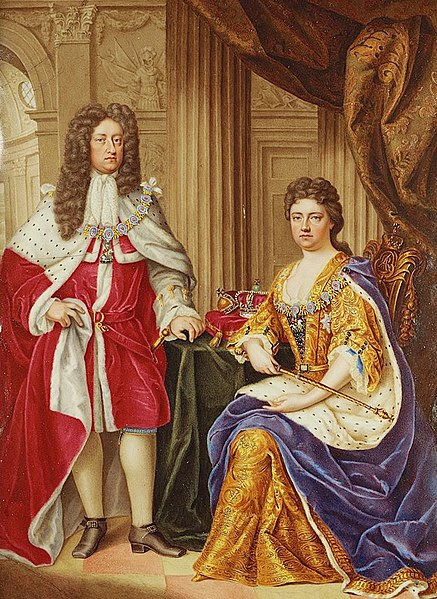 Queen Anne and her husband, Prince George of Denmark, Duke of Cumberland
Enamel portrait by Charles Boit of 1706

There is an illustrated online account of her life and reign here, and of her husband Prince George here.

Queen Anne's own life was hardly a happy one in so many respects - her seventeen pregnancies, most of which ended in miscarriages, and the loss of those children who did survive birth, her strained relations with her father and her sister, and the quarrel with her erstwhile freinds the Marlboroughs all cast long and deep shadows, and with politicala nd constitutional consequences. Her devotion in her later years to the Church of England assured her of praise and esteen from later generations, if only in contrast to more latitudinarian successors. That her reign coincided with the consolidation, if not indeed the emergence of Britain as amajor European power - perhaps due more to the brother-in-law with whom she was on such bad terms, King William III - may have had little to do directly with the Queen, but to her subjects she somehow incarnated that success and stability. A point I always make on showing people around Blenhein Ppalace is that the battle of 1704 it commemorates was the first English land victory on the continent of Europe since the battloe of Verneuil, 280 years earlier.

Not is today the anniversary of the Queen's death but, in consequence, the implementation of the Act of Settlement of 1701 and the accession of King George I and the Hanoverian line to the British throne - strictly speaking the British and Irish thrones of course. There is an online life of King George I here. Modern research suggests that despite the oft repeated Whig views of him he was in reality a much more effective and shrewd monarch than is usually supposed.

It is somewhat sobering to reflect that the Act did not merely exclude the Queen's younger, and at that time unmarried, half-brother - to Jacobites of course King James III and VIII since their father's death in 1701- but a whole host of relatives more closely related to the Stuarts than the Hanoverians. I think the number excluded because they were Roman Catholic was something like 52 or 54 (I don't have a fully paid up Jacobite to hand to check with).

In the televsion series Royal Heritage in 1977 the point was made that the idea that for the Elector Georg Ludwig his accession as King George I was a great promotion is somewhat weakened by a glance at the spectacular Baroque gardens of Herrenhausen, the summer palace of the Electors, and very much the creation of his mother the Electress Sophia. At that time the palace itself could not be shown having been largely oblierated by the RAF in 1943. In 2009=13 it was rebuilt, as can be seen here , and on the blog post at  The Reconstruction of the Hanoverian Royal Palace of Herrenhausen. Having gained their Electorate a generation earlier the House of Brunswick-Lüneburg was definitely on the up even before the British Parliament found that the Electress Sophia was the nearest Protestant relative to Queen Anne.