At noon today in Blackfriars here in Oxford two Franciscan Conventuals,  Bro. James Mary McInerney and Bro. Gerard MaryToman made their Solemn Profession as members of the Order (OFM Conv.) to the Vicar General, Fr Jerzy Norel, who had travelled from Rome for the occasion. This was the first time Franciscan Conventuals had been professed in Oxford  for almost 500 years and today can be seen as the formal beginning in Oxford of their new house here, which they will occupy next month.

Oxford does, of course, already have a Capuchin Franciscan house in Greyfriars in Iffley Road, but they are now to be joined by the Conventual Franciscans who are establishing themselves in the former convent of the Anglican All Saints Sisters of the Poor in St Mary's Road, just off the Cowley Road. They are well known for its work in running and promoting Hospice work for terminally ill children and teenagers in Helen and Douglas House. The building itself is an early work of Sir Ninian Comper. The site has been renamed The Friary. The Anglican Sisters will continue their work alongside the Hospices and based in smaller premises as part of the same complex. The Friary will become the main formation house for the Friars throughout the Custody of Great Britain and Ireland. 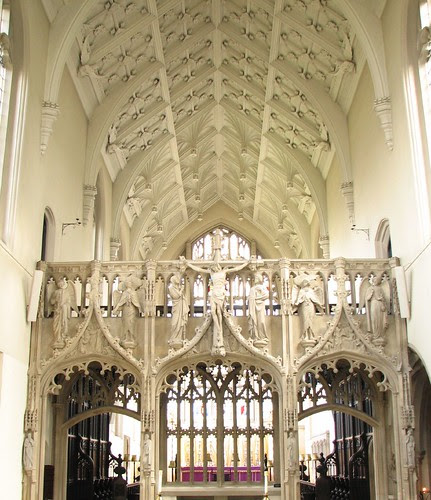 The interior of the chapel of the Convent

The chancel of the chapel 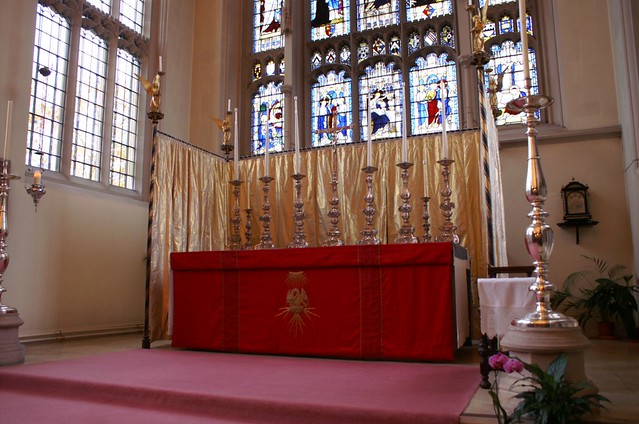 Image: Allan Barton (Vitrearum) on Flickr
The website of this new Franciscan foundation can be seen, hopefully, at The Greyfriars | Oxford.
It will no doubt have the photographs which were being taken of todays professions and Mass.

There will no doubt be some confusion as to which is which community - but 'twas ever thus with the Franciscans. When it comes to habits theConventuals wear grey habits, the Capuchins wear brown habits.

The following paragraphs are adapted and supplemented from posts there, which reproduce piecues from the local press:


On Saturday 17th May 2014, the Friars from Blessed Agnellus of Pisa Formation House in Oxford appeared on the front page of the Oxford Mail .

The interview came about after plans were unveiled that the Friars will be moving from their current home in Holton, near Wheatley, to a new home in Cowley just a short distance from the city centre. 12 friars will be making the move into the former All Saints Convent on St. Mary's Road in Cowley, formerly the home of the Anglican All Saints Sisters of the Poor. The Sisters will be relocating to a smaller residence nearby, and have been extremely positive about the friars' arrival in Cowley.

Greyfriar formator Friar Daniel Geary, 53, said: “It is going to be quite a wonderful and historic moment. “There will be 12 of us in the house of formation, with many being involved in training and going to classes. But part of that process is also to become involved with the area. Cowley is a very rich and diverse place and we look forward to joining the community.”

Known as the Greyfriars for their grey habits, two members of the Franciscan Conventuals first arrived in Oxford in 1224, having been sent to England by St Francis of Assisi.  In September that year nine Franciscans arrived ashore at Dover, led by Blessed Agnellus of Pisa, and chosen by St Francis of Assisi. In November 1224,after leaving five friars in Canterbury, two friars moved to London, and the last two settled in a house in Oxford. Here they established a major teaching foundation here which survived until 1538. In 1517 (an ominous year!) Pope Leo X divided Franciscans into Conventuals, who live in cities, and Observants, who live outside them.

Last September the Greyfriars took a house in Holton, near Wheatley, and since then they have been hoping to move back to the city.

Paul Kennedy, 28, is currently training to be a friar. He said an increase in young recruits like himself prompted the Order to come back to Oxford. He said: “We thought it was a good reason to come back, it’s really quite exciting for all of us. “It has been a struggle to find somewhere that has enough bedrooms for all of us.  But we heard the All Saints sisters had left their convent because it was too big and they were more than happy to let us move in.”

The new convent is also next door to Helen & Douglas House, established by the Sisters, and the St John’s residential care home, which Paul says the Greyfriars will offer their services to.

He added: “We have already had much support from local groups and many of us study at Blackfriars Hall [in St Giles’]. “The reason we wanted to be back in a city is so we can work closely with the homeless, the poor and local schools. We hope if people know we are here they will come to us when they need us most.”

For those friars training for the priesthood, The Friary will be an ideal location for travelling in to the city centre for their classes at Blackfriars Hall. The multicultural Cowley Road is busy, colourful and lined with cafés, restaurants and shops, with a mixed population of students and professionals. On the same site as The Friary are Helen & Douglas House children’s hospice, and St. John’s nursing home; both of which have a long and fruitful history with the All Saints Sisters of the Poor who helped to establish them both. Student Friars are hoping to get involved with these ministries as part of their apostolates, and have already started volunteering at Helen and Douglas House and The Porch Steppin’ Stone Centre on nearby Magdalen Road.

The Friars spent two full days moving from their former home in Holon, near Wheatley and are now looking forward to a short break before they begin their summer assignments. The Friary will officially open in September with the start of the new academic year, and the Friars will welcome two new postulants and also the return of three post-novices from the United States.

The Community asks for  prayers during this time of transition, and also for the All Saints Sisters of the Poor.