Today is the 635th anniversary of the death in 1378 of the Holy Roman Emperor Charles IV, of whom there is an illustrated online biography here. There is another online account here, also with illustrations, but in occasionally quaint English  and a third one, with links to accounts of other aspects of Bohemian history and places of interest, can be accessed here.

Emperor Charles IV kneeling before the Virgin and Child
The Emperor, who is sponsored by St Sigismund, wears the Imperial Crown with the white mitre which was worn with it until the sixteenth century, and inspired the form of the crown of Emperor Rudolf II - the later Austrian crown

From the votive painting of Archbishop Jan Ocko (from the atelier of Master Theodoric), before 1371

As those accounts all show it is with his kingdom of Bohemia that the Emperor Charles and his artistic patronage is always particularly associated. He encouraged the building of St. Vitus Cathedral in Prague, which had been begun in 1344, two years before his accession, with its shrine chapel of the national patron St Wenceslas, to whom Charles, whose own original name was indeed Wenceslas, a name he also gave to at least two of his sons, was devoted. He commisioned the Crown of St Wenceslas  in 1347,  founded the Charles University, the first within the Holy Roman Empire, built the Charles Bridge with its great ceremonial gateway, redolent of Imperial glory, and created the palace fortress of Karlštejn, south west of Prague.Under his influence and encouragement mid-fourteenth century Bohemia had a rich and vibrant court culture, with a wonderful legacy in art and architecture. The religious revival encouraged by the Emperor was to bear fruit in these aspects as well as eventually leading to the rise of Hussitism - a legacy that would no doubt have horrified him.

Within the wider Empire he is best remembered for the Golden Bull of 1356 which regulated the election of subsequent Kings of the Romans and Holy Roman Emperors down to 1806.

One of his daughters by his fourth marriage was Anne of Bohemia, who married King Richard II in 1382, and there were clear and important links between the two courts and countries - one can see obvious parallels between the courts of the Emperor Charles and of King Richard, as well, of course, as the Wyclif-Hus nexus. 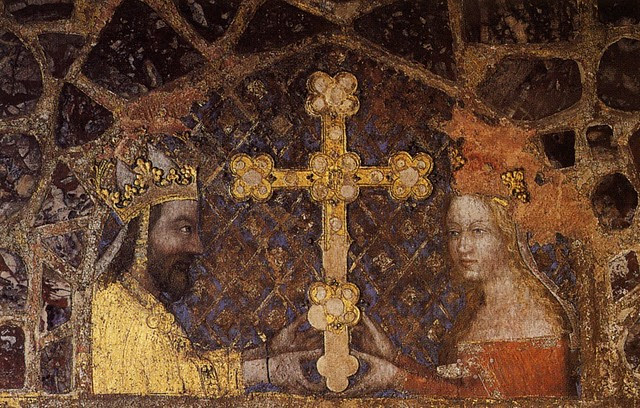 Emperor Charles IV and his third wife Anne of Swidnica (Schweidnitz) - who died in 1362 - adore the Cross
Karlstejn Castle, on the west wall of the Chapel of Relics of the Suffering of the Lord
Nicholas Wurmser of Strasbourg, late 1350s.

Image: 'German 1' by arthistory390 on Flickriver

Thinking and writing about the Emperor and his life and times has inspired me to go and hunt down a copy of Fr Bede Jarrett's biography of him.
Posted by Once I Was A Clever Boy at 09:25