The Crown of St Wenceslas


Last year I posted about the Bohemian regalia in The Crown of St Wenceslas and with a following article about Treasure from the age of Charles IV.

I have subsequently found some other websites about the regalia. There is an illustrated official Czech website here. There is another account of the crown here, which has two splendid illustrations which I have copied below. 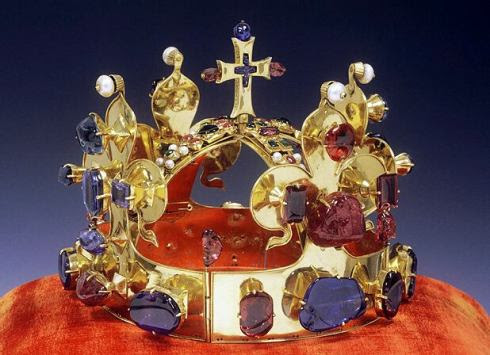 The Crown of Saint Wenceslas 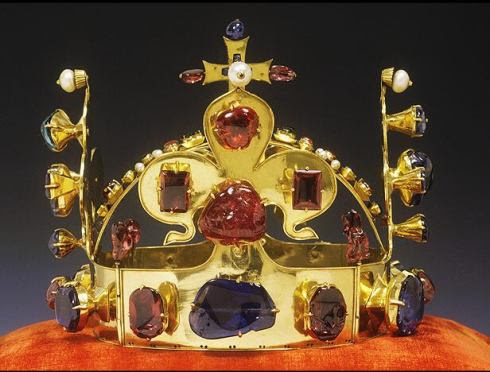 The Crown of Saint Wenceslas
I also found another article whichI have copied and edited - the original version can be seen here.

The Czech Royal Coronation Jewels
The royal crown was dedicated to St. Wenceslas, the principal saint of the kingdom. At the request of the Emperor Charles IV this was confirmed by a bull of Pope Clement VI, which authorised excommunication for any unauthorized person handling the crown. The crown was supposed to be permanently placed on the head of St. Wenceslas and removed only for a coronation or an exceptionally solemn event in Prague or its nearest environs - and for one day only. The crown was in the care of the Metropolitan Chapter attached to St.Vitus's Cathedral.

However these prescribed strict measures were in force up to the end of the fourteenth century at the latest. The coronation jewels were then deposited in Karlštejn Castle. After the outbreak of the Hussite wars in 1419 Sigismund of Luxembourg took them to Hungary, from where they were returned to Karlštejn in 1436. For a short time before the mid-fifteenth century they were also kept at Velhartice Castle and from 1453 to 1619 they were again guarded by two Karlštejn burgraves. From 1619 to 1620 they were kept in a room of the Land Rolls. During the stormy period of the Thirty Years' War the jewels were alternately kept in a cellar in front of the chapel and in secret places outside Prague, for example, in the cellar of the parish church at Ceske Budejovice.

From the 17th century they were permanently kept in Vienna, returning to Prague only on the occasion of a coronation. In 1791, under the Emperor Leopold II the jewels were finally taken to Prague Castle, displayed for a whole afternoon for the first time and then placed in safe-keeping along with the crown archives.

After a short period during which they were deposited in Vienna in the course of the Prussian-Austrian war they were solemnly returned to Prague in a festively decorated train in 1867, this being their last journey. After being exhibited they were placed in the newly adapted Crown Chamber, where they have remained to the present apart from a short period in 1938 (when they were secretly taken to a safe in a bank in Zilina) and in 1945 (when they were walled-up in the floor of the Old Royal Palace).

The Crown Chamber is one of the least accessible places at Prague Castle. The only entrance to it is a metal-plated door in the south-western corner of St.Wenceslas's Chapel. In order to open in the seven keepers of the keys have to get together. These person are: the president of the Republic, the prime minister of the government, the archbishop of Prague, the Chamber of Deputies, the president of the Senate, the Metropolitan Chapter of St. Vitus and the mayor of Prague.
In the course of the twentieth century the coronation jewels were exhibited eight-times - in 1929, 1945, 1955, 1958, 1968, 1975, 1978 and 1993.

The crown, known as the St. Wenceslas crown, was most likely made in 1347 of gold plate. It has the form of a coronet consisting of four parts, each of which terminates with a large fleur -de-lys. The individual parts are joined at the top by two curved pieces on which the decorations of an older jewel (coronet or belt) are fastened. At the place where the curved pieces intersect there is a gold cross with a sapphire cameo. In all there are 19 sapphires, 44 spinels, 1 ruby, 30 emeralds and 22 pearls on the crown. The total weight of the crown without the parts made of material is 2,475.3 grammes. It is always exhibited on a special cushion of red velvet with the embroidered Czech emblems of 1867.

The sceptre of the first half of the sixteenth century is 670 millimetres in length, its weight being 1.013 grammes. It is gold and decorated with 4 sapphires, 5 spinels, 66 pearls and hammered and enamel ornaments.

The orb of the first half of the sixteenth century is also made of gold. It is 220 millimetres in height. On the lower hemisphere there is a hammered relief with scenes from Genesis, while on the upper one there are scenes from the life of King David. In all 8 sapphires, 6 spinels and 31 pearls were used for its decoration.

The coronation mantle, with an ermine stole, belt and maniple of red fabric with a pattern woven with gold are kept in the depository of historic textiles in another place. They originated in the first third of the seventeenth century as a part or the collection of Czech coronation, royal and electorate textiles, whose other parts are now in Vienna.

As a rule the St. Wenceslas sword and coronation cross are exhibited with the coronation jewels. Both form parts of the St. Vitus treasure. 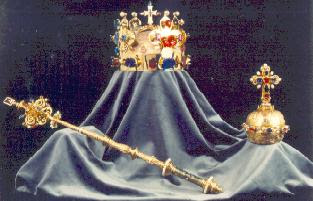