As part of the Open Doors in Oxford weekend sponsored by the Oxford Preservation Trust there is an exhibition at the Oratory this weekend about the history of the church and of the Oratorian tradition.

Amongst the pictures on display was Joseph Aloysius Hansom original design for the church dated January 5 1872 as depicted in The Builder. Although I had heard of this design I had not seen it hitherto. The style was perpendicular, with an apse, shallow transepts and extended right to the Woodstock Road frontage where it had a tower copied from that of St Nicholas Newcastle upon Tyne (since 1882 the Anglican cathedral). This, based on the height of the figures in the drawing, would have been 147 foot high. had it been built it would have given the church a sentinel tower at the north end of the city centre comparable to Magdalen on the east. Indeed at about the same time Thomas Jackson's rejected proposal for the new belfry at Christ Church would have given another great tower on the south side.

I have not got the Hansome design availabe at present, but here is a picture of Newcastle cathedral tower to give an idea of just what we might have had in Oxford: 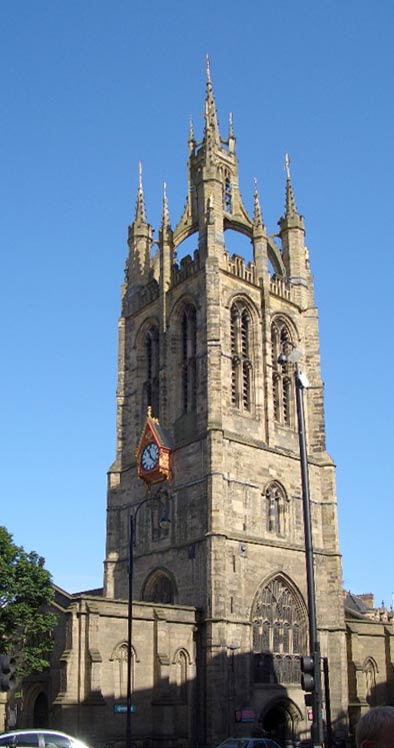 The tower of St Nicholas Newcastle, built in 1448.

Hansom's design for St Aloysius in Oxford replaces the turrets with paired pinnacles, and the finial on the crown arches is smaller, whilst the tracery in the bell openings is more elaborate, but the source is clear and the design essentially the same. Hansom has two windows at a lower level, a figure of Our Lord flanked, presumably, by statue of the twelve apostles, and at ground level an asymmetrically placed entrance archway, with a smaller door to the north

The interior as proposed by Hansom had fan vaulting. A year later in 1873 he produced a version in Decorated style with a lierne vault which might have been rather like that of the chapel at Ushaw, which is by Hansom and Dunn

Image: http://www.dur.ac.uk/b.m.hodgson/ushaw/
Another church interior with a somewhat similar effect is Giles Gilbert Scott's Lady Chapel at the Anglican cathedral in Liverpool:

As it was the design was not carried out and the much less lavish church we have to day was built. There was a fine photograph of the laying of the foundation stone laid by Bishop Ullathorne on May 20 1873 , and of the interior as first built, before the reredos was installed, but with a banner and the statue of Our Lady still in the church both recognisable.
Looking at Hansom's design I felt more than a twinge of regret that his original design had not been carried out. Perhaps I should start lobbying to extend the scope of the very worthwhile Oxford Oratory Appeal ...
Posted by Once I Was A Clever Boy at 09:59