The Crown of Poland


Whilst researching my recent post about the Crown of St Wenceslas I came accross an online article about the Polish crown, known as that of Boleslaw the Brave. The article can be read here, and I have copied the picture below from it; the article also has a picture of the medieval Coronation sword which has survived. 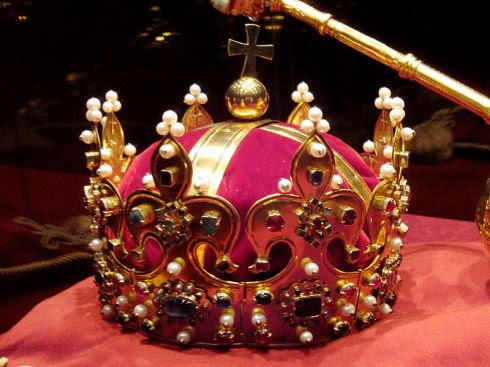 The Modern Reconstruction of the Crown of Poland
The crown was made for King Wladislaw I (Ladislas) the Short or Elbow-high who was crowned as King in Crakow on January 20 1320, following his unification of the fragmented Polish kingdom. Following the late eighteenth century partitions of Poland it came into the possession of the Prussians who deliberately destroyed it in 1809 - very bad form that in my opinion - but a reconstruction was made in 2001.

Now that the crown has been reconstructed the only thing lacking is someone to wear it. In virtually any other European country that would not be a problem, but, of course, in Poland, with the elective monarchy as it came into being fron the 1570s, it is. There are certainly various families who have worn the original crown who might stake a semi-hereditary claim, including the house of Saxony, and also a branch of the Habsburgs who looked to an independent restored Polish monarchy during the Great War.
Posted by Once I Was A Clever Boy at 10:41