Episcopal consecration by the Pope

Whilst preparing my post last Saturday on Pope Pius X I found this photograph in the Wikipedia biography of the Pope. 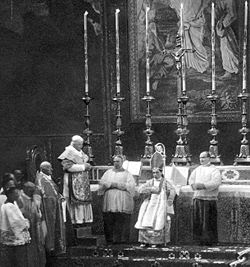 Quite apart from its intrinsic interest this photograph took my eye as Richard Fleming was also consecrated as a bishop by the then Pope, Martin V, in 1420 when the curia was in Florence. The consecration probably took place somewhere in the Dominican house of Sta Maria Novella. Such consecrations did not always take place in a church or chapel - I have seen at least one reference to a room in the Vatican palace being fitted up as a temporary chapel for such a consecration in the early sixteenth century. Following the consecration Fleming can be seen to have received various papal grants on behalf of his family and friends.

In the verses he wrote for his tomb he specifically referred to having been consecrated by the Pope himself and the wonderful piety the Holy Father had displayed.

Although the setting and vestments would have been somewhat different - fashions do, after all, change - photographs such as this are a reminder of the continuity of liturgical tradition and practice, and help one to envisage Fleming's consecration.
Posted by Once I Was A Clever Boy at 17:22