The New Liturgical Movement has a splendid set of photographs of spectacular Assumptiontide processions in Spain, and also of the Mystery Play at Elche in the province of Alicante. You can see them here.

Many years ago I watched, on two separate occasions. a television programme about the wondrous Elche play. The play was approved by Pope Urban VIII in 1632, but is said to date from, if I recall aright, the thirteenth century. This spectacular production takes place within the church is a precious survival of medieval and early modern devotional theatre. It is an example of things which were casualties of the reforming zeal of the dangerous modernisers of the Council of Trent.

The NLM photographs convey something of it, but film is what really conveys the excitement and sense of occasion, and NLM does have a link to a video. 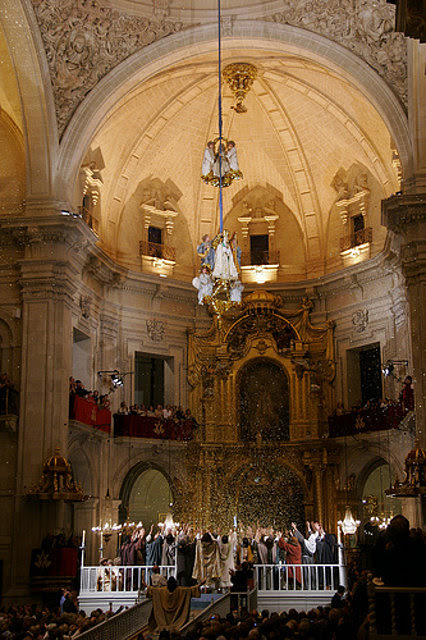 I have lifted the following account from a site dealing with holiday rentals in the area:

The Elche Mystery Play is a lyrical drama dating from the Middle Ages, is the city's most deeply-rooted cultural symbol. In 2001, UNESCO declared it a Masterpiece of World Oral and Intangible Heritage.

The play is performed in the Basilica of Santa María every 14th and 15th August with full dress-rehearsal performances taking place earlier on the 11th,12th and 13th. It narrates the Dormition, Assumption and Coronation in Heaven of the Virgin Mary. The play has survived due to the determination of the citizens of Elche past and present. After the performing of plays in churches was banned by the Council of Trent, Elche obtained a Bull from Pope Urban VIII to keep the play alive. Such has been the determination of the citizens of Elche that the Play is now the last surviving example of this type of drama. The Mystery Play's music, including monody and polyphony, uses Medieval, Renaissance and Baroque melodies. It is performed by a non-professional adult choir and a children's choir whose innocent voices represent the Virgin and the angels.

However, the really distinguishing factor of the Elche Mystery Play is its complex medievally-inspired production, dividing the scenic space into horizontal, worldly space and vertical, aerial space and using aerial equipment that converts the whole into a spectacular experience.

A cadafal, or temporary square stage, accessed by an andador, or ramp, is raised in the centre of the Basilica's transept. This is where most of the action takes place while a false ceiling is installed in the base of the cupola above the stage.

When the Gates of Heaven are opened, a complex piece of stage machinery, the magrana, firstly lowers an angel bearing a message, followed by a choir of angels to guide the Virgin in her Assumption to the heavens where she will be crowned by God Eternal from a third machine, the Trinitat. At the moment of her coronation a shower of tinsel falls from heaven in what is undoubtedly the most moving moment of the whole Play.