The Sacred Heart Altar at the Oxford Oratory

In recent weeks I have posted about the new altar in the Oratory chapel dedicated to the Sacred Heart in Preparations for consecrating an altar, in New Altar at the Oxford Oratory and in Film of the Oxford Oratory Altar Consecration
Today I see that the Liturgical Arts Journal has an fine illustrated post about it by Shawn Tribe. As it gives much more detail about the commission and has some excellent photographs I have taken the liberty of copying it and republishing it here: 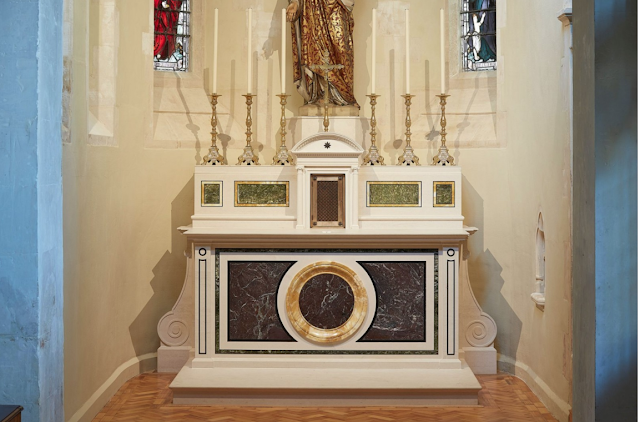 We were recently sent an email from one of the Brothers of the Oxford Oratory, informing us of the commission and execution of a new altar in the aforesaid oratory church. The Oxford Oratory is, of course, one of the premiere venues of Catholic Oxford, and as such any news coming from there is always of interest to us. The Oxford Oratorians summarize the project accordingly:

In 2017 the Fathers of the Oratory in Oxford were given a generous bequest to restore the Sacred Heart chapel in the Oratory church. Although much loved, the furnishings of the chapel were not in a good condition. The timber altar and reredos had suffered the ravages of time and several unsuccessful attempts to update and renew them. With the support of a number of additional benefactors, the Fathers decided to take the opportunity to design something beautiful and lasting which would contribute to their overall goal of restoring the Oratory church to something of its original splendour.

After consultation with a number of architects, the new Sacred Heart altar was designed by Robert Kerr riba, of ADAM Architecture in Winchester. ADAM Architecture are one of the leading practices in the UK specialising in classical and traditional architecture, and Mr Kerr’s expertise in classical architecture fits well with our design brief and the Oratory’s intentions for what is today an unusual and exciting project for architects working in traditional architecture in England. The Altar was crafted by S McConnell & Sons, expert stonemasons working in the shadow of the Mourne Mountains in Northern Ireland.

It was the Fathers’ desire from the outset to install an altar sympathetic to both their Oratorian patrimony in the Italian counter-reformation and to the sober, restrained neo-gothic character of the Oxford Oratory church, designed by Joseph Aloysius Hansom in 1875. This is quite appropriate a development, finding precedent in a number of neo-gothic churches in England, but particularly so in Oxford where there are many examples, both secular and ecclesiastical, of classical and baroque architectural elements sitting in harmony with their gothic surroundings.

Mr Kerr took as his inspiration a number of churches in the city of Rome associated with St Philip Neri, founder of the Oratory, with the facade of the church of the Roman Oratory, Santa Maria in Vallicella, providing significant inspiration for the design in this proposal. The volutes supporting the sides of the mensa are evocative of the great volutes supporting the upper register of the facade of the Vallicella and the surround to the tabernacle here is reminiscent of the great west door St Philip’s church.

The use of coloured stone in this proposed design is entirely in keeping with the tradition of design in the Roman baroque but also in keeping with the use of marble elsewhere in the Oratory church in Oxford. The red, green, yellow and black can be found throughout the sanctuary and on the nave pilasters, whilst the soft green is picked up from both the pulpit and the other side chapels.

The Fathers were very pleased to be able to have the altar consecrated according to the more ancient use of the Roman Rite on 14th August 2020 by Bishop Robert Byrne, Cong. Orat. Bishop Byrne was the founding provost of the Oxford Oratory and is now bishop of Hexham and Newcastle. The altar provides a fitting place for the devotion to the Sacred Heart which is so central to the devotional life of many Catholics, but also importantly for the celebration of private Masses. A film of the highlights of the consecration, accompanied by the music sung by the Oratory Choir on the same occasion, may be viewed here.

Here are a few photos of the new altar: 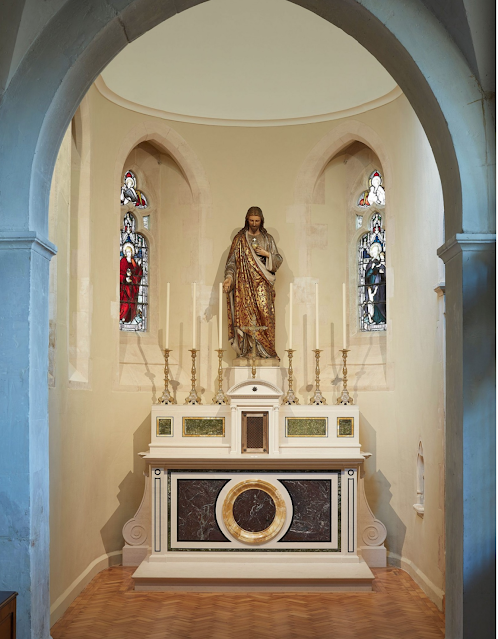 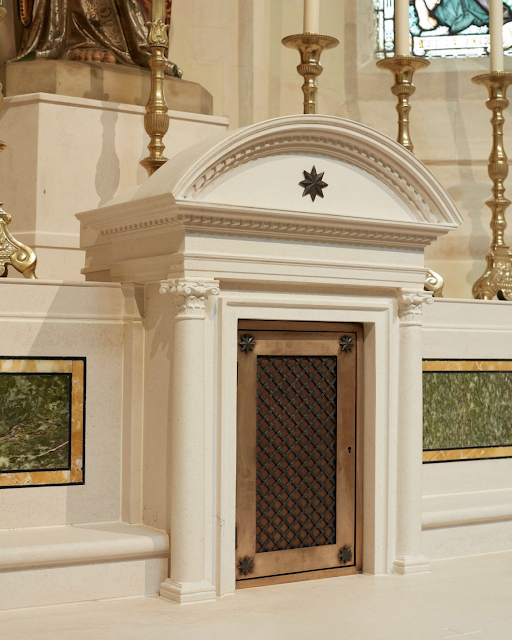 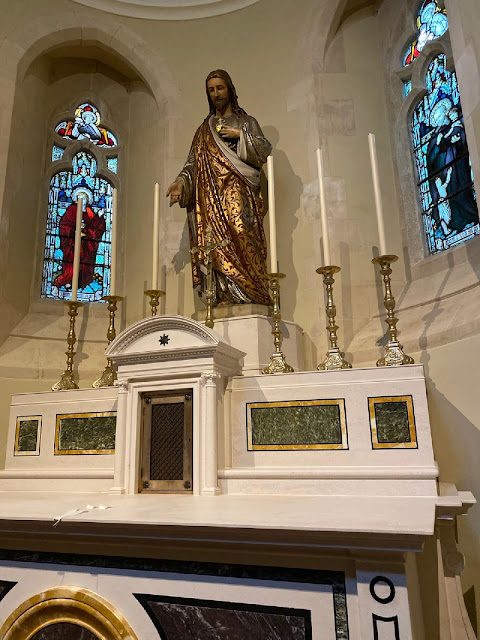 Mariela García said...
This comment has been removed by a blog administrator.
24 September 2020 at 08:03