The Accession of Philip Augustus

It was on this day in 1180 that the fifteen year old King Philip II ascended the French throne on the death of his father King Louis VII.
The Wikipedia life of him can be seen at Philip II of France
Born in 1165 his birth to the aging King Louis and his third wife was seen as the heaven sent gift of a male heir to secure the house of Capet and led to great rejoicing in Paris. He was described as Dieudonne, rather as King Louis XIV was to be almost five centuries later.
On November 1 1179 he was crowned as junior King - the last French monarch to be so anointed in his father’s lifetime - at Reims. As the Wikipedia life recounts his near fatal illness sent the ailing King Louis VII on pilgrimage to Canterbury to seek the intercession of St Thomas, and despite its seeming success the strain precipitated the ailing King’s demise.
King Philip II is undoubtably one of the greatest of all Kings of France. The chronicler Rigord described him as Augustus - an instance of classicising in the era of the twelfth century renaissance - and the name has stuck. The  French still see him as one of their rulers who made France the state it had become - a unity centred on rule from Paris, a consolidator of territory and authority. From 1190 he became the first monarch to use the title King of France  rather than of the Franks, although the former did not become exclusively normative until the sixteenth century.
The King’s territorial gains speak for themselves: 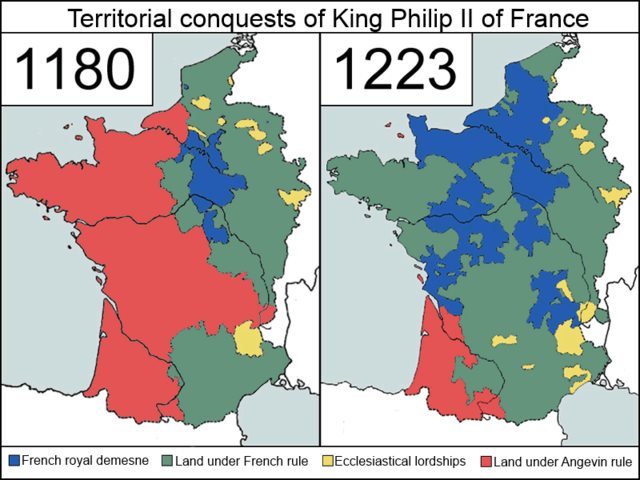 Image: Wikipedia
To the English of course he has the image as the bad guy, the man who broke up the Angevin Empire from 1204, the opponent of three successive English kings. He had a huge impact on the history of England - more than any other King of France, or anyone else who has usurped their authority.
Tenacious and ambitious but prudent he exploited his opponents’ weaknesses, and was blessed on occasion with good fortune as at the battle of Bouvines in 1214.
Jim Bradbury wrote an excellent and readable biography of him in 1997, filling a major gap for the Anglophone world in Philip Augustus King of France 1180-1223 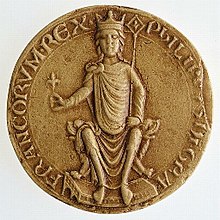 The Seal of King Philip II
Regrettably nocontemporary portrait of the King exists other than his seal is known to exist. Wikipedia does quote this description of him
“ a handsome, strapping fellow, bald but with a cheerful face of ruddy complexion, and a temperament much inclined towards good-living, wine, and women. He was generous to his friends, stingy towards those who displeased him, well-versed in the art of stratagem, orthodox in belief, prudent and stubborn in his resolves. He made judgements with great speed and exactitude. Fortune's favorite, fearful for his life, easily excited and easily placated, he was very tough with powerful men who resisted him, and took pleasure in provoking discord among them. Never, however, did he cause an adversary to die in prison. He liked to employ humble men, to be the subduer of the proud, the defender of the Church, and feeder of the poor"
His grandson St Louis, born in 1214, recalled his grandfather telling him to be loyal to the Church, advice he followed as King Louis IX. Bradbury corrects a misapprehension that he had only the sight of one eye and does add one possible point as to his appearance - the King’s son Philip ‘Hurepel’ acquired his nickname from having a shock of blond or auburn hair, and Bradbury suggests that King Philip may have been similar as a young man.
For those who glean their knowledge of the past from modern stage and screen the young Capetian King is one of the roles in “The Lion in Winter.” It is entertaining  but, surprise surprise for such a drama, historically inaccurate  - a twelfth century version of “Dallas”
Posted by Once I Was A Clever Boy at 17:42