The Brother-in-law from Hell

Last Tuesday, being August 4th, was the 755th anniversary of the Battle of Evesham in 1265. Fought in a thunderstorm it basically marked the end, if not the very end, of the Baronial Reform movement with the death of its leader Simon de Montfort, Earl of Leicester. There is an account of the battle with appropriate links at Battle of Evesham 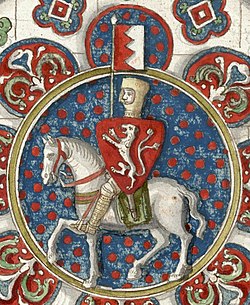 Simon de Montfort, in a drawing of a stained glass window at Chartres Cathedral, c. 1250
Image: Wikipedia
It is a while since I read the biography of Earl Simon by Dr Maddicott, and I have not yet had a chance to look at Professor David Carpenter’s massive new work on King Henry III.  On this topic my ideas may deviate from the received narrative, but essentially they are that whilst King Henry may have had practical failings as a ruler alongside his splendid vision of what his kingship should be, he did not deserve a brother-in-law like Simon as he came to see, and indeed, as he said, to fear. The Westminster Abbey website has an excellent section about the King, with fine pictures of his tomb in the Abbey he rebuilt together with a bibliography, all of which can be seen at Henry III
There is an online biography of the Earl
at Simon de Montfort, 6th Earl of Leicester
Like all of us he was a man of his times. He was not, to apply G.P. Cuttino’s splendid phrase about King Henry II, Mr Gladstone in chain mail.
The Wikipedia biography I linked to above betrays this in reverse with a very modern concern, and over concentration on the fact, that Simon was not nice to the Jews. So he was not Woke? Nor does that mean we should hail or denigrate him as a thirteenth century Corbynista. What it should tell us is not to reinvent the past according to modern preconceptions and obsessions.
Simon de Montfort did not invent Parliament. The first recorded summons of representatives of the counties to join the landed magnates was issued by that noted constitutionalist King John before Magna Carta was even a drop of ink on parchment. A similar assembly was also summoned in 1254. Montfort did add representatives of the cities and towns in  1265. They became part of the Commons, but rather as second class MPs for most of the medieval period. As the Anonimalle Chronicle brings out legend it records in 1376 with regard to the seating in the Chapter House at Westminster when the Commons met there - the knights of the shire sat on the wall benches, the townsmen members sat on the floor.
It was King Edward I, the victor at Evesham, who, painfully aware of the limitations on governance under his father, who really made Parliament work as part of the constitutional government of realm, notably in 1295 with the ‘Model Parliament’. That did nothing to stop King Edward having a major falling out with several of the leading magnates a couple of years later in a way reminiscent of his father. Nor did it obviate the numerous clashes of the reign of King Edward II between him and the magnates, and ultimately his Queen.
Simon de Montfort the Constitutionalist hero is part of the Whig interpretation of History - i.e. a myth. In that myth, so wonderfully satirised by Sellers and Yeatman in1066 and All That  - “the greatest work of historiography written in the twentieth century” ( Prof. Sir Michael Howard, formerly Regius Professor of History in the University of Oxford - I heard him say it. ) kings and things are Good or Bad.
Thus King Henry’s foreign relatives and counsellors the Poitevins and Savoyards, being foreign, were Bad Things. The equally foreign Montfort is presented as a Good Thing.
What made all of them unpopular with some in England was indeed that they were ‘foreign’. Not so much that they were French or francophone - if such a differentiation was applicable at the time - but that they were outsiders to the established elite, and all of them on the look out for their own advantage by reason of their connections to King Henry III and his court. Piers Galveston almost a century later fell into the same category. Royal favour could mean elite or popular disfavour.
Napoleon, himself as a Corsican barely French, is quoted in the Wikipedia biography of Earl Simon as describing him as a great Englishman. Well Montfort had some Anglo-Norman Beaumont ancestry, hence his eventually successful quest for the earldom, but if things had been different - if his father had not stopped a stone from a mangonel with his head - might well have spent his life in the Toulousin.
His family were basically mercenaries - if high class ones ( and not alone in that at the time ) - be it his father on the pretty bloodthirsty Albigensian Crusade or the fate of two of his sons with Charles of Anjou in southern Italy in 1268 and thereafter.
The Maddicott biography brings out the Franciscan inspired spirituality of the Earl and his family’s home life - not perhaps savoured by his Countess. This rather self-conscious personal austerity at home is perhaps comparable to that of St/Sir Thomas More in the early sixteenth century and later on other seventeenth century ‘Godly’ families, or indeed Mr Gladstone. It is not a lifestyle that necessarily resonates with others in the elite - as Disraeli said of Gladstone he did not mind him having a card up his sleeve but he did dislike Gladstone giving the impression that God had put it there. I suspect that may have been an aspect of Montfort.
One might also wonder what he really did expect from St Louis in the Mise of Amiens. Not only was not merely another brother-in-law of King Henry and now, after the Treaty of Paris of 1259, his overlord for Gascony, but he was a fellow King.
After his victory at the battle of Lewes in 1264 his captivity of the King, the Lord Edward and the King’s brother Richard, King of the Romans and his self-assertion as, in effect, a self righteous military dictator, led to the loss of support by many of the magnates such as the Earl of Gloucester, whose defections enabled the Lord Edward to win at Evesham.
That by that time Simon was hated by many is indicated by the mutilation of his corpse after the battle.

A 13th-century depiction of the mutilation of Montfort's body after the Battle of Evesham. The body of his son Henry lies above him.
Image: Wikipedia
That there was a cult for a while at his tomb should not surprise us - sixty or so years later that happened to Thomas Earl of Lancaster and eighty years after that to Archbishop Scrope if York. The sanctification of dead political opponents was a concern to medieval and later governments. It still is in some places.
That legacy of hatred can be seen in the revenge murder by Earl Simon’s sons Simon de Montfort the Younger and Guy de Montfort, Count of Nola of their cousin  Henry of Almain whilst he was at Mass in Viterbo in 1271. Their father’s apparent piety had clearly not been inherited there.
As the account in the biography of Guy shows this murder was a very public and much condemned action.
So all-in-all I am not an admirer of Simon de Montfort and feel sympathetic to Lking Henry III landed with such a “brother-in-law from Hell”
That this was very much a family affair between brothers-in-law and nephews and cousins adds to its intensity and interest. Netflix wherefore art thou?
Looking at the topic I learned something of which I was completely unaware which is that Simon is, through his son Guy, an ancestor of Elizabeth Woodville the wife of King Edward IV, and thus the ancestor of all English monarchs, and their descendants, since 1509. Again a case of keeping it all in the family?
There is also the curious irony that the battlefield at Evesham is more or less overlooked by Wood Norton Hall, the late nineteenth century home in exile of the House of Orleans and the titular French Kings Philippe VII and VIII, and descended from not only King Louis IX but also from King Henry III and Earl Simon. Small world.
Posted by Once I Was A Clever Boy at 18:26