Lunch - and much more besides - at Fyfield

Yesterday a friend drove over from Buckinghamshire to take me out for lunch. Our journey took us across the Thames into what for a millennium or so was part of Berkshire until the ridiculous changes to boundaries and local government introduced in 1974 moved the area into an enlarged Oxfordshire.
We drove across country through a verdant landscape to the village of Fyfield, which lies on a flat table-land west of Abingdon. This was a first visit for both of us to a well-known local hostelry, the White Hart. Here we sat outside and had an excellent meal and caught up on news and how we had coped with ‘lockdown’.
However the afternoon was to also yield a rich historical reward. On our arrival we had noted the Manor House, which clearly had medieval features and the attractive small church to its side. This looked closed, so we did not attempt to go in. 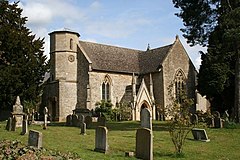 The church of St. Nicholas Fyfield
Image: Wikipedia
The White Hart itself was clearly a late medieval building, with a hall and what appears to have been a solar overlooking it.
A bit of research online yielded more about Fyfield and its history and indeed its historical associations. There are short online accounts of the village and its buildings at Fyfield and Tubney and Fyfield,
The White Hart dates from 1442 or soon after and was erected by the executors of John Golafre in connection with the establishment of his chantry in the church. It is suggested that it might have been designed as an almshouse or hospital, although despite its considerable size I thought it looked more domestic, if definitely substantial for a chantry priest.
John Golafre, who died in 1442, is commemorated by one of two fascinating tombs in the church. There is a life of him at John Golafre. For nearly half a century he had been active in the life of the county as one of its MPs and as an administrator, culminating in his appointment in 1418 as Receivor-General of Normandy and the other English lands in France.
His tomb is what is often known as a ‘cadaver’ or transi monument which shows him lying in armour on the top and beneath, displayed within the open tomb chest, is his decaying corpse. This was a popular choice for monuments at the time, and indicative of the piety of the era. 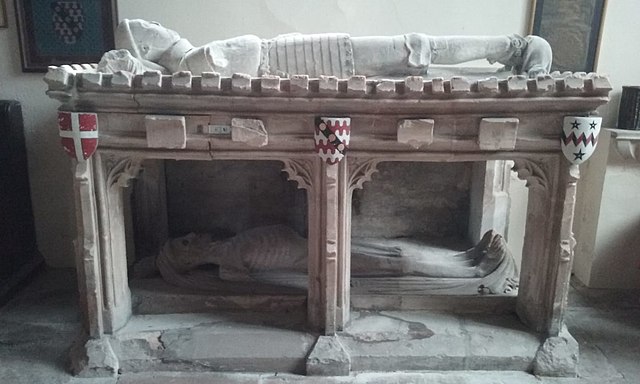 The tomb of John Golafre in Fyfield Church
Image: Wikipedia
In 1448 the manor passed from the Golafres and came into the hands of the family of the de la Poles, Dukes of Suffolk. Their local base lay to the east at Ewelme in Oxfordshire. They lost Fyfield in 1487 when the heir, John de la Pole Earl of Lincoln, of whom there is a biography at
John de la Pole, 1st Earl of Lincoln was killed at the battle of Stoke whilst apparently attempting to put Lambert Simnel on the throne as ‘King Edward VI’. It may be significant that Simnel, about what little is definitely known is set out at Lambert Simnel
is sometimes said to have come from Abingdon. Earl John’s subsequent attainder transferred Fyfield to the Crown, and in 1510 King Henry VIII gave it to Lady Catherine Gordon.
The Scottish born Lady Catherine was the daughter of the Earl of Huntly and through the good offices and low politics of King James IV had been married to the other Yorkist imposter of the 1490s, Perkin Warbeck. Claiming to be Richard, the younger son of King Edward IV by Elizabeth Woodville he advanced his claim as ‘King Richard IV’. A more persistent threat or nuisance to King Henry VII he was eventually captured and subsequently hanged in 1499. There are lives of him at Perkin Warbeck at

Perkin Warbeck by Sarah Bryson and at

The Execution of Perkin Warbeck from History Today.

His widow however found a new career as a lady-in-waiting to King Henry’s Queen Elizabeth and continued in royal service until 1530, when she was head of the Privy Chamber of the Princess Mary, later Queen Mary I. Although forbidden, without leave, to return to Scotland, her life was comfortable, she was the recipient of land grants such as Fyfield and along the way acquired three more husbands, living in south Wales with the second of these, but died at Fyfield on October 12th 1537 and was buried in a handsome tomb in the chancel. The monumental brass which once adorned it is now lost. In some respects her life was not dissimilar to that of the ‘King’s sister’ Anne of Cleves after her marriage was annulled in 1540.
There are online biographies of Lady Catherine at RBH Biography: Lady Catherine Gordon (d. 1537), at Lady Catherine Gordon from Wikipedia, at King Henry VII and the Mystery of Lady Catherine Gordon and at

There is a good photograph her tomb and another account of her life at Perkin Warbeck's widow.

Lady Catherine Gordon's tomb in St Nicholas's Church, Fyfield.
Images: alisonweir.org.uk
One can see why her life attracts the interest of lady historical novelists.
So lunch in a small Berkshire village yielded a rich harvest of history and historical associations. The lives of John Golafre and Lady Catherine Gordon open windows onto a range of aspects of fifteenth and early sixteenth century life, with a perceptible sense of contact through their tombs and the manor house about which there is an article at RBH: History of Fyfield Manor, Berkshire
So all that, a good lunch and good company. What more could one ask for on a warm summer’s day?
Posted by Once I Was A Clever Boy at 20:01