The Order of the British Empire


Today is the centenary of the foundation by King George V on June 4 1917 of The Most Excellent Order of the British Empire.

Last month the College of Arms web newsletter had an article about the Order and its insignia which the College introduced follows:

Dr Lynsey Darby, College of Arms Archivist, periodically creates online exhibitions from the College archives, which give a good overview of some of the kinds of archival material held here. The most recent addition is an exhibition on The Order of the British Empire and the Order of the Companions of Honour, to mark the centenary of their foundations, which includes a look at a predecessor Hanoverian order, the Royal Guelphic Order.

I adpted her material about the Royal Guelphic Order to produce a separate post last month, but that material can be seen again in Dr Darby's post.

Both accounts draw attention to that fact that women were admitted alongside men to the Order, but the use of the style of Dame has an older precedent. During the Civil War King Charles I createdat least one lady baronet, Mary Bolles from the West Riding of Yorkshire, and she was thereafter known as Dame Mary Bolles. 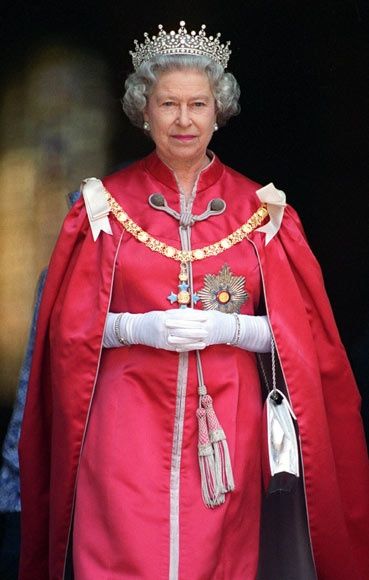 H.M.The Queen in the her robes as Sovereign of the Order of the British Empire


The present distinctive rose-pink and grey robes and riband were introduced at the suggestion of Queen Mary who became Grand Master of the Order in 1936 as well as the conjoint portraits of King George V and herself rather than the figure of Britannia on the original insignia.