" Surge illuminare"  - Rise your light has come [Isaiah 60 v.1] - is a text traditionally used at the feast of the Epiphany and provided the text for the first sermon preached by Richard Fleming as a member of the English delegation before the Council of Constance on this day seven centuries ago in 1417.

Meeting of scholars, bishops, cardinals and Pope John XXIII (antipope) in the cathedral of Constance i.e. before John's deposition in May 1415. 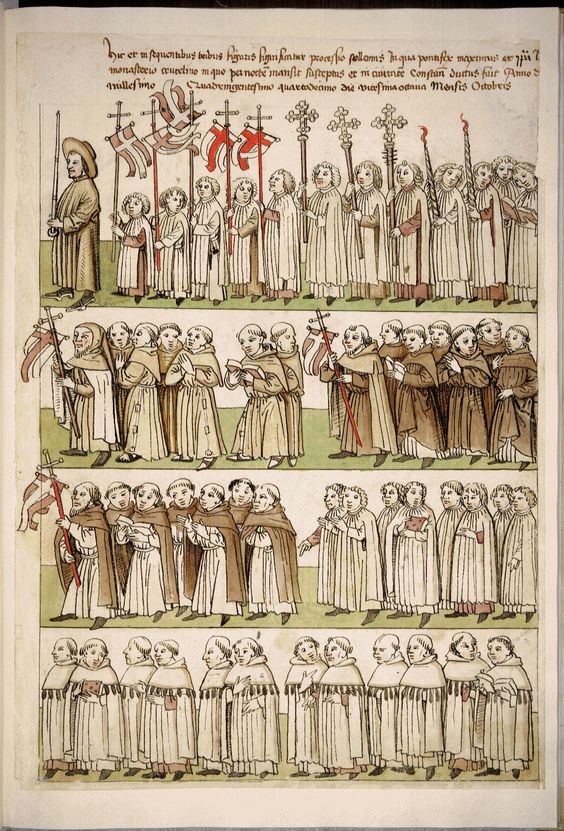 A procession of clergy and religious at the Council of Constance
From the Chronicle of Ulrich von Reichental ( MS of c.1470)


At that stage in the Council celebrating the liturgy and listening to sermons whilst they manoevered behind the scenes appears to have been th emain occupation of the Council Fathers. For Fleming this was his first, but by no means his last as a preacher in the cathedral.

The romanesque nave with its pillars of the basilica was built between 1052 and 1089, is the core  of the cathedral. Over the centuries the cathedral was altered and enhanced. In 1435, the side aisles of the nave were vaulted, followed by the main nave in 1680. In the baroque era, the middle choir was plastered and gilded. In 1856 the western Gothic tower pyramid was built.

The interior of the cathedral today

The west front of Constance Cathedral before the restoration of 1856