Yesterday evening I had supper with a friend and whilst at his house I was skim reading parts of the book he is currently reading, D.R.Thorpe's Supermac: The Life of Harold Macmillan  published by Chatto and Windus in 2010. 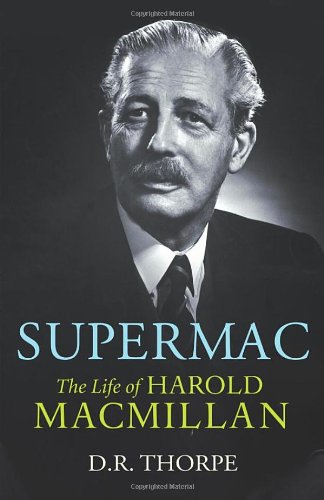 This is an immensely readable biography - indeed it made me somewhat anti-social as I delved into it ( though not to my friend's surprise or discountenance ) - and full of vignettes of Macmillan's life, contemporaries and times. Archbishop Fisher in 1961 on the requirements for an Archbishop of Canterbury is a joy to read, as is Macmillan telling Roy Jenkins of their shared working class roots as opposed to the lower-middle class Margaret Thatcher, and the scene at the Silver Wedding of the Duke and Duchess of Devonshire when Uncle Harold made his entrance down the stairs into the Painted Hall at Chatsworth leaning on the arm of another former party leader and the Duchess' brother-in-law, Sir Oswald Mosley...

Macmillan is the first Prime Minister I remember and I think he is in many ways under-rated these days. As a student at Balliol on the eve of the Great War he used to serve then Anglican Ronald Knox's celebration of the Roman Rite in a chapel at the convent of the St Thomas Sisterhood which was just in front of my kitchen window.

This is a book I really must try to read fully, and one I would heartily recommend to anyone interested in the man or his era.