This weekend has seen celebrations of the feast of Bl. John Henry Newman here in Oxford, on the 171st anniversary of his reception into the 'one fold of the Redeemer' by Blessed Dominic Barberi at Littlemore.

On Saturday night I joined, as I have each year since my own reception in 2005, the traditional Night Walk will take place, beginning at the Oratory at 7.45pm. We followed the more or less usual route to Littlemore, concluding there with a Holy Hour presided over by Bishop Robert Byrne, Cong. Orat., in the modern church dedicated to Bl. Dominic and then finished our pilgrimage in Newman's College with Benediction and veneration of the relic.

With us for part of the walk was Fr Paul Chavasse, Cong. Orat., former Provost of the Birmingham Oratory, and it was intersting to see him standing by the newly installed memorial near Magdalen School to his relative Capt. Noel Chavasse, who was awarded the Victoria Cross twice in the Great War - the later award being posthumous. Only three people have ever been awarded the decoration twice and Noel Chavasse was the only such recipient in World War I. 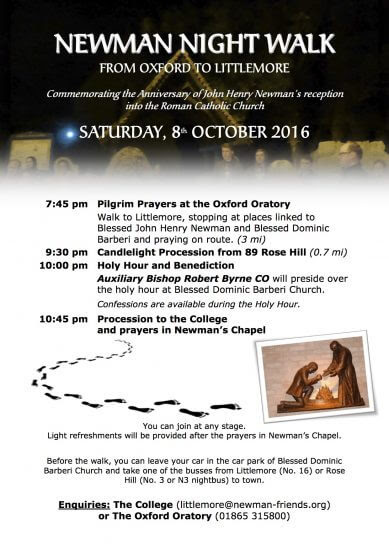 
This morning Bishop Robert celebrated the 11 Solemn Mass at the Oratory, at which Fr Paul preached and based his elegant and thoughtful sermon on a tour of Newman's room which survives as the Cardinal left it at his death in 1890 at the Brimingham Oratory. He stressed the numerous small pictures of his friends with which Newman adorned his room as reminders to pray for them, and urged such a concern for our friends upon us. 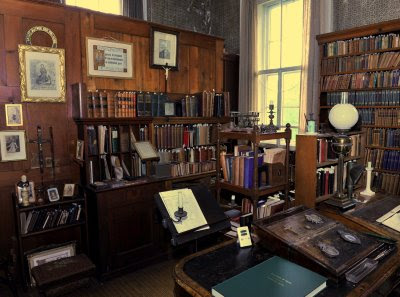 Newman's room at the Birmingham Oratory