Yesterday I travelled with a friend to the wedding of another friend at Chislehurst on the borders of greater London and Kent. As we arrived I recalled and commented upon the fact that Napoleon III lived in Chislehurst from his exile in 1871 until his death in January 1873, but thought no more of the fact.

When we were in the church of St Mary, which from the outside is a typical mid -nineteenth century suburban church in the early gothic style, and tucked away amidst suburban houses, we were sitting towards the back of the building and my eye noted an elaborate memorial on the south side of the nave just in front of the chancel step, complete with crowns on the finials. Opposite, on the north side of the church, was what appeared to be a rather elaborate chapel. After the ceremony as the photographers arranged and rearranged people into photographic order outside my travelling companion and I looked around the church. 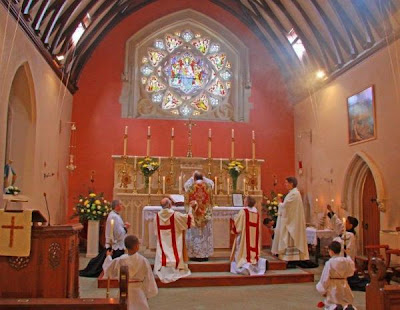 The chancel of the church - but not yesterday


The Bonapartes had certainly been here. The monument I had spotted on the south was that of the Prince Imperial, who was killed in the Zulu War in 1879, whilst the chapel on the north had held the granite sarcophagus, donated by Queen Victoria, of  the Emperor Napoleon III from his death in 1873, until both were removed to her new foundation at Farnborough by the Empress Eugenie. The widowed Empress lived in Chislehurst until 1885, and when she died in 1920 was buried with her husband and son at Farnborough.

There is an illustrated account of the Emperor's funeral at the website of the Chislehurst Society at Funeral of Napoleon III and the Society also has a piece, again with pictures, about his son at The Prince Imperial. The Prince was well regarded in England and Queen Victoria erected a memorial to him in St George's Windsor. There is another account of him at  Napoléon, Prince Imperial The tomb of the Emperor whilst at Chislehurst

The monument to the Prince Imperial

In addition to attending a very enjoyable and happy wedding - which was why we were there at all of course - finding these historic connections was a fascinating bonus.