Today is the 685th anniversary of the death of King Robert I of Scots.

Robert the Bruce (Brus) or, as he became in 1306, King Robert I of Scots, was born on 11 July 1274, almost 740 years ago. As King of Scots from 25 March 1306 until his death, although not recognised as such by the English until 1328 and the Treaty of Northampton, he is arguably the greatest, and certainly one of the greatest of Scottish monarchs. His assertion of independence, his victory at Bannockburn in 1314, the writing by his nobility of the Declaration of Arbroath in 1320, and his successful campaigns against King Edward II in the north of England ensured the survival of Scotland as an seperate kingdom. The grant by Pope John XXII to him of the right for his succcessors to be anointed as monarchs was a further expression of sovereignty, and in advance of several other European kingdoms.

That said the events of the early fourteenth century should perhaps be looked upon with caution in making decisions about Scottish independence today in the twenty-first century. unity in diversity after so long aperiod of Union seems the right answer to me. Nonetheless without King Robert I the Scots (and, to the extent they are paying any attention at all, the English) would not be having the current debate about Scottish independence. It was King Robert, and not the semi-terrorist Wallace - the utterly appalling film Braveheart notwithstanding - who forged or reforged the national identity of his kingdom.

He was the son of Robert Bruce, 6th Lord of Annandale, and Marjorie, Countess of Carrick, and was born at Turnberry Castle. Although it is unknown whether Turnberry Castle is his actual birthplace, the fact that he spent his boyhood residing in the castle is not in doubt. Little now remains of the castle, its few stone smarked by the lighthouse which is a landmark near the golf course at Turnberry. 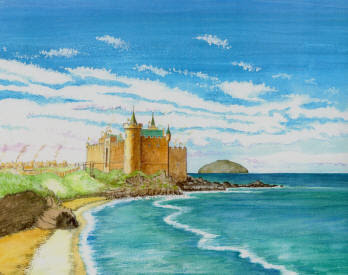 
There is more about the castle and its history from the same website which can be viewed here.

The King's last years were marked by illness, and from a cast of his skull, found in 1818, at Dunfermline where he was buried a scientist, Richard Neave, has recreated the closest ever likeness of Robert the Bruce. This reveals the leprosy ravaged face of the warrior King Robert I at the age of 55, just before his death. It shows how the condition destroyed the cartilage in his nose causing it to collapse, and also shows a huge wound down his skull, fractured bones around the eye and a toothless mouth. 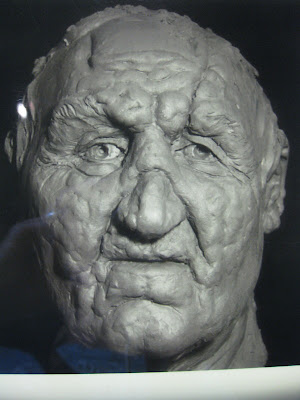 A facial reconstruction of King Robert I

The King died at his manor house at Cardross near Dunbarton on the Firth of Clyde and his body was buried at Dunfermline Abbey, the shrine of St Margaret of Scotland, but his heart was removed and was to be taken on Crusade by Sir James Douglas, before eventually being buried at Melrose Abbey.

The link National Museums Scotland - Robert Bruce has expandable images of the King's Great Seal, of some of his coins and of artifacts associated with him and of fragments of his original tomb from Dunfermline.

The modern tomb of King Robert I at Dunfermline Abbey