Today I travelled with a friend, who is the Rector of the Brothers of the Oxford Oratory, to attend the diaconal ordination at Westminster Cathedral of a young man who used to attend our meetings when he was studying in Oxford at Blackfriars.

This necessitated an early start, and delays with the traffic, taking us on a long detour from Hillingdon to Hammersmith and back to Shepherds Bush, meant we arrived in the cathedral during the Gloria.

Our friend Kevin Athaide was ordained alongside Cyril Chiaha and David Lucuy, who are from the diocese of Westminster and studying with him at Allen Hall. In the current vacancy of the see of Nottingham, which is his sponsoring diocese, Kevin's ordination was conducted along with theirs by Bishop John Arnold as an auxiliary bishop of Westminster.vi

As befitted the occasion and setting this was a dignified liturgy, and it conveyed - as it should of course - a sense of the Church as a whole doing something significant in ordaining these three men.


Afterwards we were able to congratulate Kevin, and catch up on news as well as to see Fr Richard Duffield C.O.from York. We talked with him about developments there at St Wilfrid's, all of which sounded very promising.


Afterwards the two of us from Oxford went up to visit the exhibition of Cathedral Treasures in the lower part of the tower. After some comic difficulties negotiating the turnstile, we got in to see firstly the display about the building of the cathedral, and to look at the original model for the building. One thing I discovered was that the architect, J.F.Bentley, came from my father's home town of Doncaster.


The collection of treasures is very well worth seeing, and includes relics, altarplate and vestments. Here are some pictures of the display from the cathedral website:

The mitre was worn by Cardinal Wiseman at the dedication of St George's Southwark, and is a Pugin design.
The enormous monstrance was given by a nun as a thanksgiving for her accetance into her Community.


Also on display is the amethyst encrusted cope morse traditionally worn for their enthronements by the Archbishops of Westminster, including the present one. 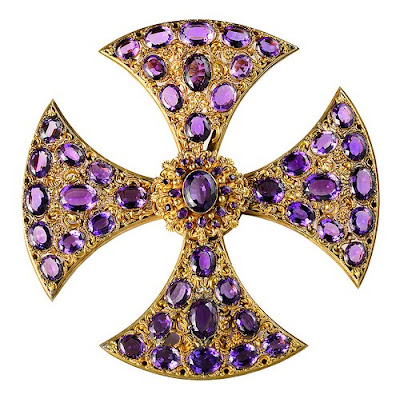 In another case was Cardinal Hume's Order of Merit, and relics of  St John Southworth, and a display about the survival of the relic of his body, which is enshrined in the cathedral.

The cathedral website has details about the exhibition which may be read here.

Before we left the cathedral precints we had a good look around the St Pauls Bookshop and that of the Catholic Truth Society in the piazza outside.

An enjoyable day, and a significant one for the three deacons, whom I invite readers to join me in keeping them in our prayers.