When we boarded the mini-bus at Houghton Fr Richard, who had organised the excursion, said we would now go on to visit Walsingham. This was a hitherto unannounced, but very welcome, addition to our schedule.

I was somewhat intrigued, as were others in the party who are converts from an Anglo-Catholic background, and who have all been to Walsingham on many occasions, to find that several of the  cradle Catholics in the party had never been before to England's Nazareth. The popularity of Lourdes as a destination for Catholic pilgims explains this in large part, but Walsingham is very much part of the Catholic tradition of England as the Dowry of Mary.


Our first stopping place was at the Slipper Chapel where we said a decade of the rosary and spent some time in silent prayer in this part of the medieval pilgrimage shrine that has been restored to the Roman obedience.

The interior of the Slipper Chapel


We then went into village to look round, and at this point the mini-bus experienced a tyre puncture from aprojecting scaffolding pole, which made a delay in our return likely. In the meantime we set off to explore the attractions of Walsingham. I went with Fr Jerome to look at the historic parish church. This was restored after a serious fire in 1961, about which there was an exhibition and booklets, and we spent a while looking at the monumental brasses in the church - a feature of which I think I was hitherto unaware. We also looked at the very fine fifteenth century Seven Sacraments font - described in the church as the best of its kind - and also at the extremely interesting and unusual collection of wall monuments in the building - there are some very unusual designs.

We walked back by the concealed ha-ha road past the site of the medieval priory and original Holy House and past the Anglican Shrine and the Knight's Gate to rejoin our companions in the market place.

Here we realised that the puncture did indeed mean a delay, and whilst we waited for that to be sorted out we were led to resort to the Black Lion for a pub meal. One of our group decided that Our Lady was determined we should stay in Walsingham, and that led to the serious idea of organising aparish weekend there next year, which seems a very good idea to me. 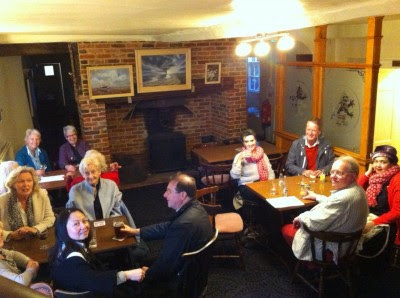 Fortunately, after some initial difficulty in raising help in deepest darkest Norfolk, the puncture was repaired and we set off back to Oxford. A later return than anticipated but a most enjoyable day.