The fortieth anniversary of the accession of the King of Sweden

Today is the fortieth anniversary of the accession to the throne of the King of Sweden in 1973, and there are celebrations being organised in Stockholm to mark the occasion, as can be seen here. 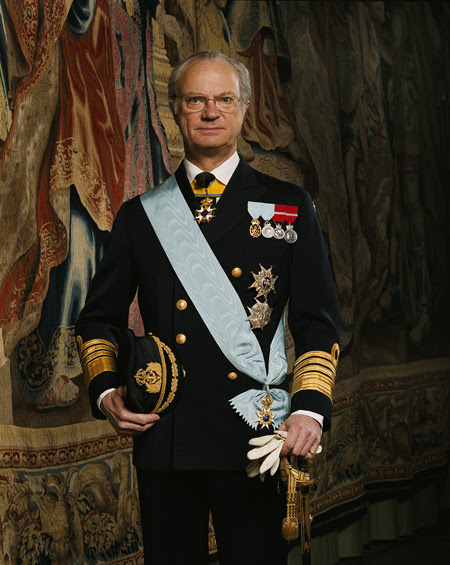 There is an online biography of King Carl XVI Gustaf here.

I recall his accession following the death of his grandfather King Gustaf VI Adolf, who was almost 91 when he died. The age disparity between the two Kings, the trend of Swedish Social Democracy and plans to alter the constitution all led commentators to speculate as to the survival of the monarchy in Sweden.  Forty years later, supported by Queen Silvia and with a popular Royal family, notably the Crown Princess, and as evidenced by the reaction to her wedding and that of her sister Princess Madeleine earlier this year, those queries have been answers in a way that might have surprised some in 1973. King Gustaf VI Adolf, of whom there is an online biography here, followed his father in moving with the political and constitutional changes that adapted the government of Sweden from the letter of the 1809 agreements towards a parliamentary system, notably after 1917. In a sense King Gustaf can be seen as moving the monarchy from a more Germanic tradition towards the model in Denmark and Norway.

King Gustav VI Adolf, born in 1882, was a link to a pre-Great War world - he represented his father at the funeral  in 1916 of the Emperor Francis Joseph, and held a number of Prussian and pre-1918 German Orders as well as Russian Imperial ones, as is shown in the biographical link above.

The new constitutional arrangements for Sweden, a process which began at least as early as 1971 when the Riksdag became unicameral, and which were introduced in 1974 removed the remaininf formal political powers of the monarch. This was essentially a formal legal codification as a fundamental law of the de facto adaptations of the Instrument of Government of 1809 which had developed under the previous two Kings. The Swedish urge to write it formally into law is at varaince with the unwrittend tendencies of the British constitution, and whether not requiring the King to sign new laws into being is a good idea is, I think, open to question. However these changes do need to be seen in the context od the history of the Swedish monarchy and people, as can be seen in the following online articles  on the Swedish Monarchy  and on the Swedish Constitution.

As these both show they are variants on the pre-existing arrangements, and the monarch retains an important ceremonial and formal role in the country. The change to the succession law in 1980, establishing absolute as aopposed to agnatic primogeniture was something about which the King expressed concern, but other realms have now followed the Swedish initiative. Interestingly the constitutional arrangements still debar Roman Catholics from the throne - and that despite the disestablishment of the Church of Sweden in 1999.

What does appear is the continuing popularity of the monarchy - one Swedish academic has argued that removing the formal political powers has made it more so -  and that when allegations about past events in the King's private life emerged the other year most Swedes were happy to take the view that it was simply a purely private matter and in the past. In what is often seen as a very egalitarian society, the ceremonial and splendour surrounding the Crown of Sweden at, for example, the two recent royal weddings, indicates a desire to maintain and celebrate the national heritage and identity around the person and office of the monarch.