Today is the feast day of St Giles, and a day on which my thoughts are inclined to stray back to the church of St Giles in Pontefract. It was there that I was baptised and confirmed as an Anglican, and where for a number of years before coming to Oxford I served as Parish Clerk. This was in a voluntary capacity and combined altar serving with practical liturgical chores as well as writing up the marriage registers, and joining the clegy for the saying of the Office.

The church originated as a chapel of ease to the parish church of All Saints, and when that was ruined during the Civil War replaced it as the place of worship. It formally became the parish church of the town by Act of Parliament in 1789 - we had a series of celebrations for the bicentenary in 1989 - and although it still has a fourteenth century north aisle arcade, and a possibly fifteenth century ceiling, most of the church is of the eighteenth century. The distinctive tower was built in 1791 to a design by Mr Atkinson, and is a reworking of the design proposed for the previous tower which replaced an earlier one in 1707. That tower was only completed to the top of the square stage, and the proposed cupola never built - possibly because the whole structure was not stable, hence its replacement by the present dignified composition. 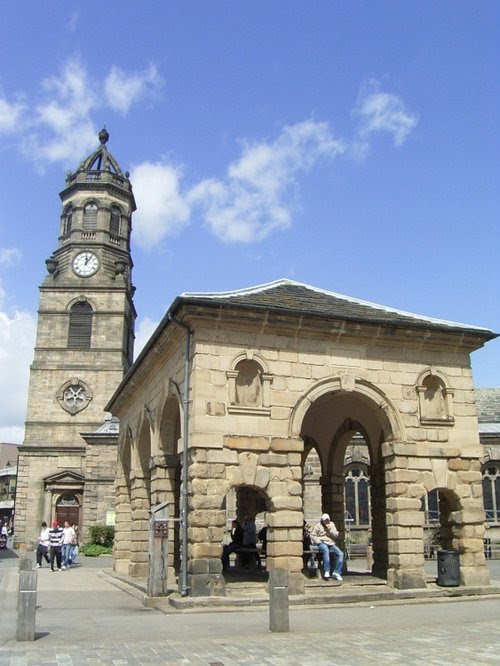 St Giles Church Pontefract
The tower dates from 1791, the south aisle is pre-1742, but with window tracery of 1868-9
In the foreground in the Butter Cross, dating from the 1730s, and attached to it on the left the pump, said to have been first installed in 1571